#30 | With Relish Live – From The Sublime To The Ridiculous

We were back at The Fumbally Cafe once again for this very special edition of the podcast, as With Relish Live makes its second appearance at The Dublin Podcast Festival & Eat:ith, The Fumbally’s autumn series of events.

This years theme was; From The Sublime To The Ridiculous, and Aoife and Harry tasked  their guests, who were each representing one of Ireland’s 4 provinces, to speak about what makes their food region so unique, brilliant and slightly bizarre at times. The star studded lineup featured some of Ireland’s most passionate and influential culinary figures of recent years, and was by far our biggest podcasting highlight so far.

A huge thank you has to go to all of our guests for joining us on the evening, our wonderful sold-out audience for their participation, Ash, Luca and everyone at The Fumbally Cafe for their amazing hospitality and Alan the HeadStuff.org Editor who got us out of some very scary tech difficulties which nearly ruined the night. 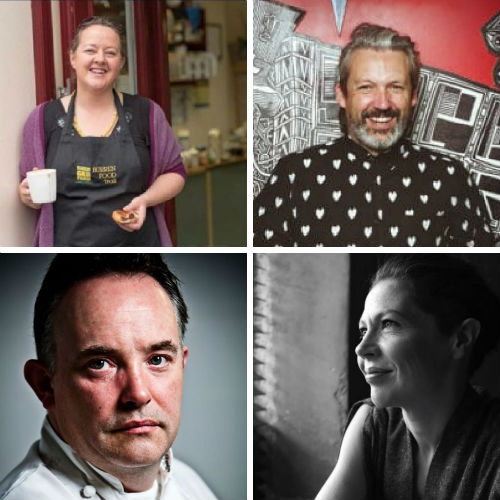 Cliodhna Prendergast who is represented Connacht, is a professional chef and food writer-photographer for the Sunday Times. Currently living in Connemara, she is one half of Lens and Larder; Photography and food styling workshops telling visual food stories with International photographers in extraordinary Irish Country Houses.

Raymond McArdle is the owner of The Forge restaurant in Co Meath, and has long established himself as one Ulsters leading chefs. Having grown up on the Co Down coast, McAardle has worked in some of the countries top kitchens such as Roscoff and Deanes, as well as earning 3 AA Rosettes when working as Head Chef at the Nuremore Hotel from 2001 to 2011. Raymond’s passion for Ulster’s food identity has stuck with him throughout his career, helping establish himself as one of the regions greatest culinary personalities of the past two decades.

Munster’s representative is Sinead Ní Ghairbhit, owner of the Cheese Press in Ennistymon, the only shop in the world that only sells Irish cheese. Before opening The Cheese Press, she produced St Tola goats cheese with her sister, Siobhán. Sinéad is passionate about delicious, quality ingredients and providing a welcoming public space where people can connect over coffee and food.

Joe Macken’s collection of fast casual restaurants have been changing the landscape of how we eat since 2007, with the birth of the original JoBurger . Originally from Slane, Co Meath from a family of hoteliers, Joe’s passion for locally produced ingredients makes him the perfect candidate to represent Leinster for this culinary roundtable.

Please check out Eat:ith to see some of the amazing events they still have left for this years series.

Ian is a Dublin based food lover with an appetite for making great podcasts and an occasional Spice Bag. He has worked in various capacities for FM104, Newstalk and Brooklyn based Heritage Radio Network over the past eight years. Ian is the producer of 'With Relish' a food podcast on The HeadStuff Podcast Network

Banter with Jim Carroll ft With Relish LIVE at Beatyard

#23 | How The Internet Has Changed The Way We Eat: Aoife McElwain