Rayne Booth is Programme Curator at Temple Bar Gallery + Studios, and Director of Dublin Gallery Weekend. She has been curating and organising arts events since 2006, and is incredibly active in promoting the visual arts in Dublin. I was fortunate enough to sit down with Rayne and discuss the Temple Bar Gallery, Dublin’s ever-changing art scene, and what to expect during the upcoming Dublin Gallery Weekend. 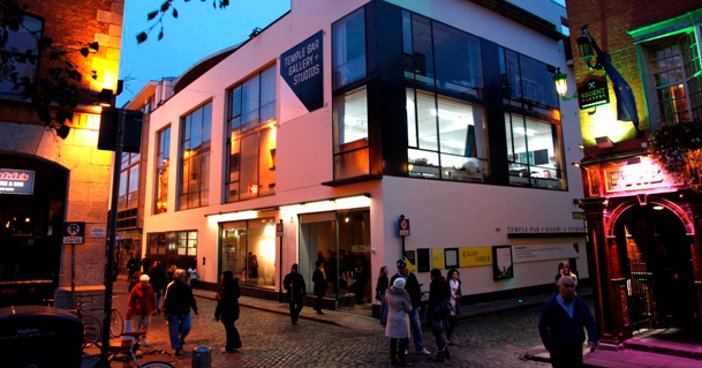 Can you tell me a bit about the Temple Bar Gallery + Studios?
“We really focus on production here, because we’re a studios organisation we’ll always invite artists to make something for the space, instead of just bringing in art to fill it. We’re giving artists space to make their work, but we’re also giving them a space to show it. In terms of exhibitions here, we’ve shown some really great things over the years.”

How often do you switch up the exhibitions?
“Well we have 5 exhibitions a year, so about every two months there’s a show. Although the gallery program is quite tight, but we do a lot of different things in the studios as well, like artist talks, workshops, open studios… events like that all through the year.”

Can anyone come in and see the studios?
“At times, say, when an artist is leaving; we will invite people to come in, it’s open to the public, and listen to the artist speak about what they’ve been up to. Then people can see “behind-the-scenes” to the artistic practice and what’s happening here. We want to encourage people to come in and see the space.”

You founded the Dublin Gallery Map in 2014, which has been huge in making the arts more accessible to the public. How did that come about?
“I wanted to develop something that would help the galleries of Dublin to collaborate, and expand their audiences. Every time I would go to another city there’s a map, like Berlin and London, so you know where all the arts events and galleries are. A lot of people who live in Dublin don’t even know where all the galleries are, there are so many. Say you’ve got a day out, the map is like a free walking tour of the city through it’s art galleries.”

That will come in handy during your other project, the Dublin Gallery Weekend. What motivated you to set up this kind of visual arts festival?
“The inspiration for it was Berlin Gallery Weekend. I went to it a few years ago and thought it would be brilliant to do here. But Berlin’s is a bit more about the commercial galleries getting together… I wanted to think of the younger galleries as well, like Art Box or Basic Space. There are all these little places and they’re doing really cool things.”

So this is the very first Dublin Gallery Weekend, with hopefully more to come. How will it stand apart from Culture Night?
“I think Culture Night is amazing, and because it’s only one night, it gets people who wouldn’t normally go out and see culture to go experience all these different things. I thought it would be good to borrow on that model, but just focus on the visual arts.”

And it’ll be spread over three days, so a bit more relaxed.
“Right. Friday night will be more like the “night out” I suppose, there will be a lot of gallery openings. Then Saturday is going to be more day-time events, there’s a lot going on that day, performances and workshops and talks. And Sunday will be more chilled-out… Normally a lot of galleries don’t open on a Sunday, so that will really be a day to wander around and see exhibitions. It’ll be a really nice thing to do on a Sunday.”

Are there any events you’re particularly excited for?
“Oh there are loads! It’s hard to pick… but there are these tours we’re doing around different parts of town. We have volunteers that will be bringing people around, and at each gallery there will be representatives to talk about the gallery and the work, so you get to meet the gallerists. It’s about the art, but also about the galleries themselves and getting to know the people who are working there.”

You’ve been incredibly active in promoting the art scene here over the years. What makes Dublin stand apart from other cities in terms of art?
“I think that there’s really exciting stuff happening here. I think that Irish artists are really strong and well-informed, and they definitely do their own thing. We do have a visual arts market here, but it’s much smaller than the bigger cities in Europe or America, and so the artists aren’t too influenced by that. They don’t have to alter or position their work towards the market, and I think that’s a good thing.”

What challenges would young artist face in today’s market?
“After the property market crashed lots of little studios started popping up, places like Block T or Basic Space, and it was a really exciting time. And now with property rising I think it’s so difficult to get studio space.. artists often have no choice but to move into a freezing cold warehouse, and make it nice. And that kind of gentrifies the area… but then the space will get sold for loads of money, and the artists are pushed out. It’s really painful and really difficult for artists… and it’s a serious problem because if artists can’t get space here, they’ll leave, and the city won’t be as vibrant, and the art scene won’t be anywhere near what it is now. That’s why I think we’ve got to be careful, and that’s why I want to do things like this festival and keep an emphasis on the arts.

So keeping people actively participating in the visual arts is vital then, not just for artists, but for the whole city’s cultural landscape.
“Right, we’ve got so much to be proud of, but I think the arts do get taken for granted. Like a shop you walk by and think “oh I must try that place,” but then you never go in… and you feel really awful when it closes down. That’s what the map, and these events, are all about; trying to promote the fact that we are open every day, and there are events going on, all year long. That’s why I hope this weekend will be a good thing, for being able to prove that we really are involved in development, and encouraging an audience in the arts.”

Dublin Gallery Weekend will run from September 11th to the 13th and include over 60 events from 30 galleries in town. Details for all the gallery events can be found here.

You can pick up your Dublin Gallery Map at many art venues around Dublin, and see the online version at www.dublingallerymap.ie

Delaney Davis is a Fine Arts graduate from Reno, Nevada. She currently lives in Dublin where she paints, writes, and drinks excessive amounts of tea. She is a freelance artist and visual editor of HeadStuff.org.