By Grace de Bláca Last updated Apr 27, 2017
Share
Every year, Jameson Whiskey commissions an Irish artist to design a limited edition bottle for St. Patrick’s Day to celebrate Irish culture. This year, Dublin-based design and illustrator Mr Steve McCarthy was chosen to create the 2017 limited edition bottle.
The design, based on the Jameson motto “Sine Metu,” which encourages people to move away from the traditional path, was the starting point for Steve McCarthy.  It’s a bold, modern design that lends itself to the bottle and to the various street murals that have been painted around Dublin by Jameson, which are based on McCarthy’s design. We grabbed McCarthy to quickly chat about his artistic process, Dublin as a creative background, and putting a modern spin on traditional tales. 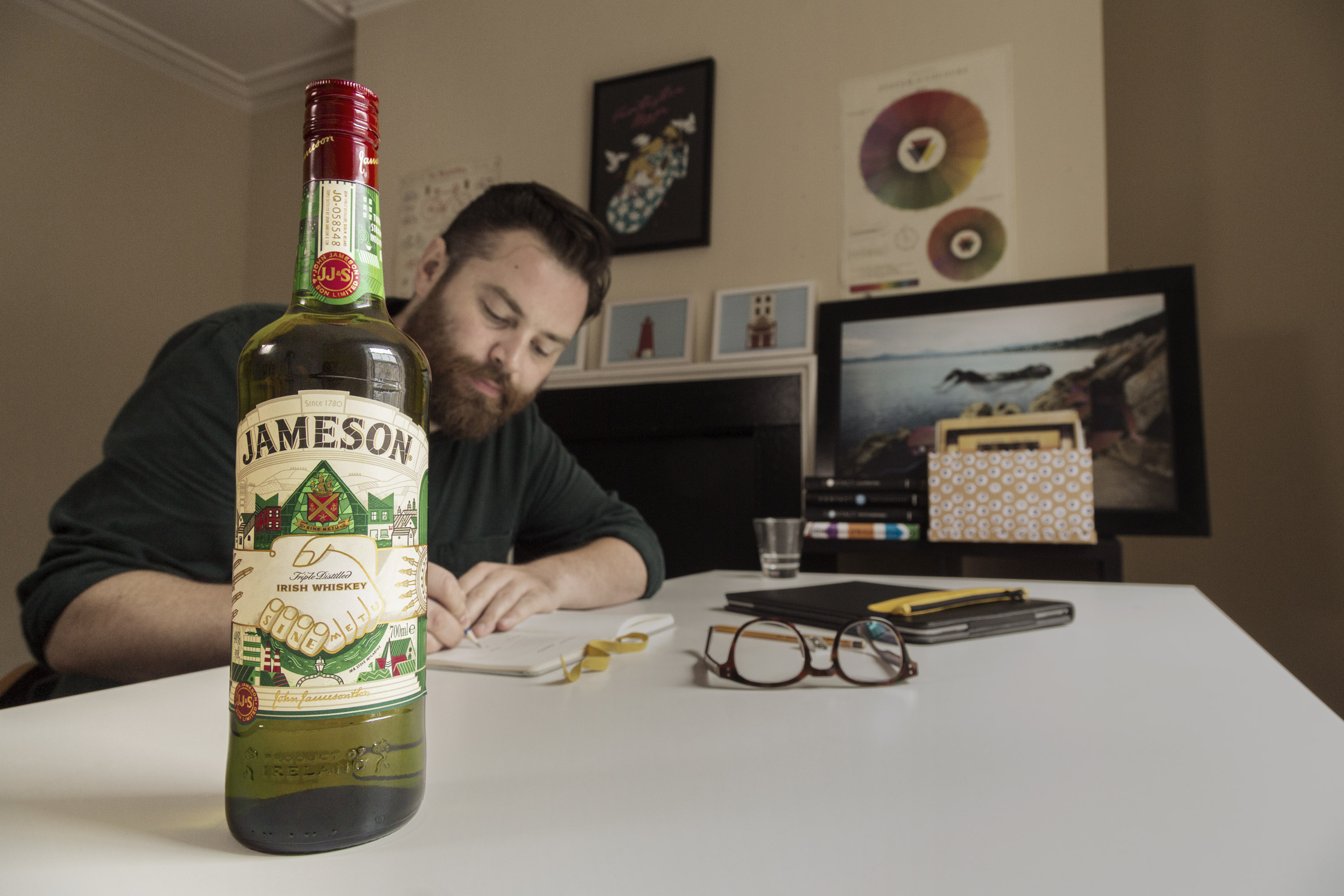 HeadStuff: Could you tell us a little bit about the inspiration for the design, which is all about chancing your arm and trying new things?

Steve McCarthy: I was inspired by the real life legend behind the phrase “To Chance your arm” a medieval tale about two foes, one barricaded behind a door, and the other risking their arm through a hole cut in the door in the spirit of reconciliation. That door is still there, hundreds of years later in St Patricks cathedral, they call it the door of Reconciliation, the fact that its there, that its a phrase we all take for granted is fascinating to me, I love that so many strange phrases we use might have these Raiders of the Lost Ark – style legends behind them, its so much craic!

HeadStuff: The bottle has Dublin as a backdrop, was it important for you to include your own interpretation of the city?

Steve McCarthy: Definitely, it was important for me to represent it in an abstract and personal way, I really love the low rise patchwork of buildings that Dublin has, I think its really unique, you can get a pretty impressive view of the city from only 1 or 2 stories high, its something I’ve always coveted, the label subtly references the view from my first studio and my current studio in Dublin, you can see the history of Dublin from the 3rd floor of any building.

HeadStuff: The illustration brings in elements of history about a feud between two clans depicted in a modern tattoo style. Was it a conscious decision to blend the old and new in your work? Is it a Steve McCarthy style?

The funny thing about Dublin is for a tiny place, we’re a belligerently modern city, we are at the forefront of design and culture in so many areas, but we very much still live in this ancient place

Steve McCarthy: The funny thing about Dublin is for a tiny place, we’re a belligerently modern city, we are at the forefront of design and culture in so many areas, but we very much still live in this ancient place, with the relics of our past in the architecture everywhere, I think thats special, and something to be celebrated, that we can have one hand in the past and one in the future, I thinks its what makes our culture so vibrant.

HeadStuff: The design has found itself on multiple platforms – from the bottle itself, to murals in the city centre. What were the challenges of creating an image that would lend itself well to different environments?

Steve McCarthy: Finding a good story was key, and I really felt like I struck gold, I always want my work to be grounded in a good yarn, whether its from history, or from my own head, it gives the work an anchor, and somewhere to keep drawing from (pun intended), it also means it can be expanded upon, I hope I will be able to keep developing the story through other work with Jameson, I feel really honoured to be associated to with such a damn good tale. 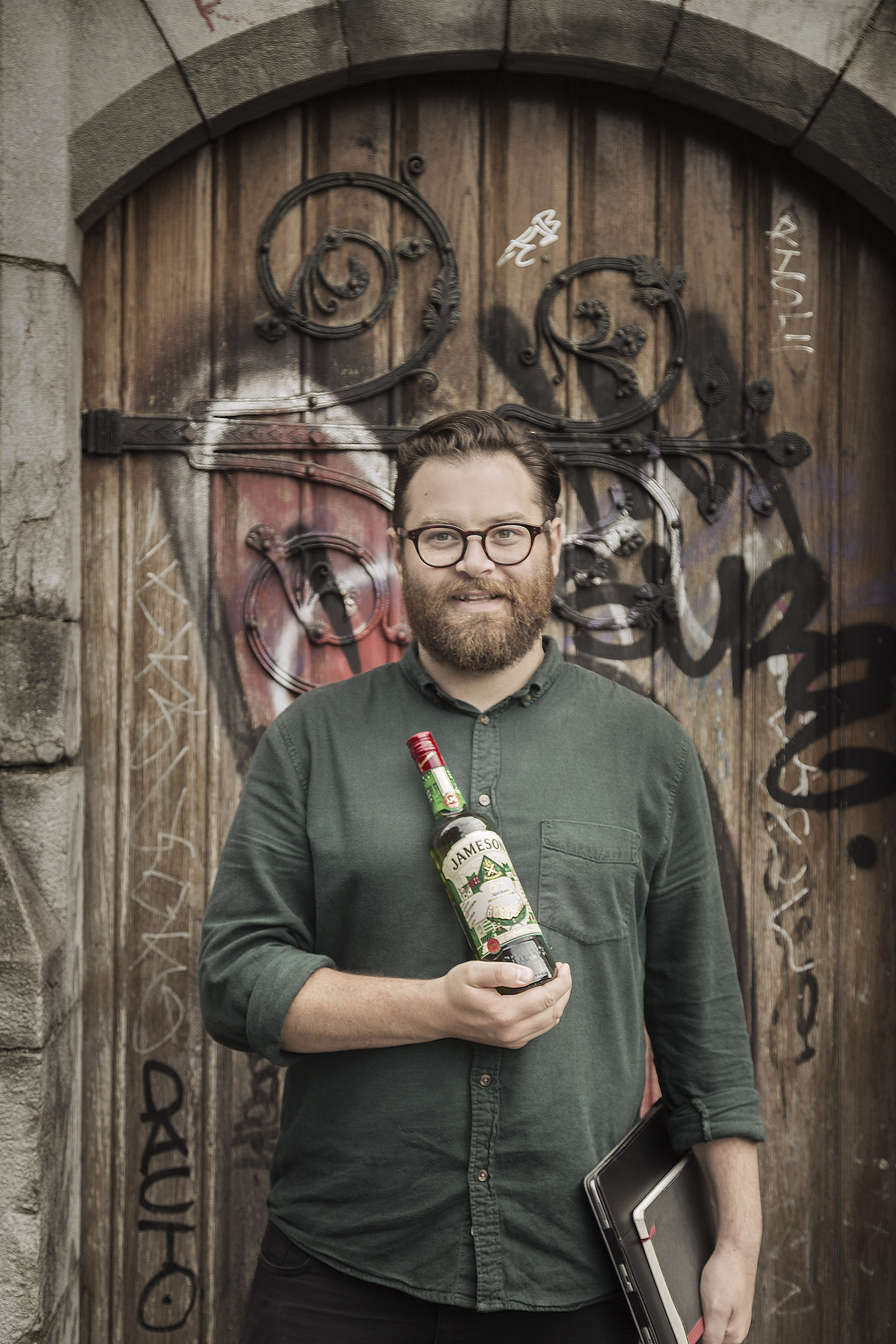 HeadStuff: The project was commissioned for St Patrick’s Day, are you hoping that the design will live on?

Steve McCarthy: Apart from being able to dine out on that story forever, I’m excited that Jameson went all in on the story and the history for the design, it gives me a lot of encouragement to develop similar stories through research and archeology, if I can fashion myself into some kind of slightly dorkier Indiana Jones for Illustration i will have succeeded.
Images via Burrell Marketing & Publicity
Continue Reading
dublinHistoryIllustrationgraphic designst patrick's dayjamesonvisual artsirish visual art
Share

Grace is a twenty-something graduate of Film Studies in Trinity College living in Dublin, and can usually be found passionately discussing which Britney Spears song is the best. You can find her tweeting @gracadeblaca.

NO ENCORE #057 | This Podcast Is Scheduled For One Fall