Conor Nolan is an illustrator and designer fresh out of NCAD who spends his time drawing, scribbling and screen printing in Dublin. He has illustrated for the likes of Hunt & Gather, SkiBeat and the Sunday Business Post. Most of Conor’s work involves drawing on paper with ink to capture a handmade feel, and creating interesting portraits of everyday people. In his graduate show this past June in NCAD, Conor showed a project entitled 29 59 56, an illustrated account of the first ever swimmers to swim the Irish Sea in 1993. Using print and animation, 29 59 56 recalled the 29 hours, 59 minutes and 56 seconds that it took to cross the Sea, through the eyes of his father Les Nolan. The work called on the rough look and feel of photocopied newspaper articles and training footage from VHS tapes from ’93 to evoke the experience of the people involved in overcoming the “Everest of Swims.” 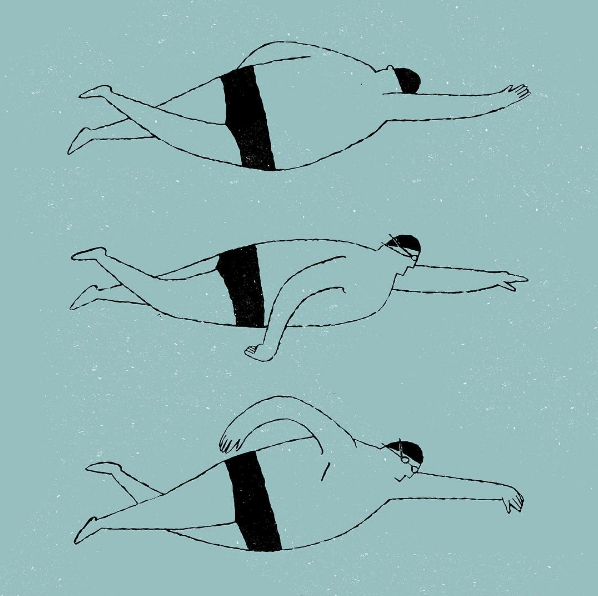 The project is “through the eyes of your father”. Was he one of the swimmers?

Yep! It was a relay swim with six people, where one person swims for an hour and then kind of tags out until it’s their turn again. My Dad trained in the panel of about 15 people over the course of the preparation of the swim, about a year and a half if I remember correctly, and on the third and final attempt he was called up for the swim, with two days notice. He even swam an extra hour as another one of the swimmers couldn’t swim their last leg.

How did you decide on this subject of Irish swimmers as your final project for NCAD?

Looking back it almost seems like I just started drawing swimmers one day and didn’t stop. But really, I thought about what the function of illustration is for a long time first, about what an illustrator can do that other people can’t, and I figured that an illustrator is able to tell a story in a way that’s unique to their craft and can evoke feelings that probably can’t be quite grasped otherwise. This took a while. I asked a lot of tutors and other students what they do to come up with ideas and spent a while trying different things. In the end it was me having drawn this swimmer in a zine that I made in a day that started the conversation. So I wanted to take a story and tell it in a new, illustrated way, and I just so happened to have a really good story at home in a box full of swimming-related bits and bobs. 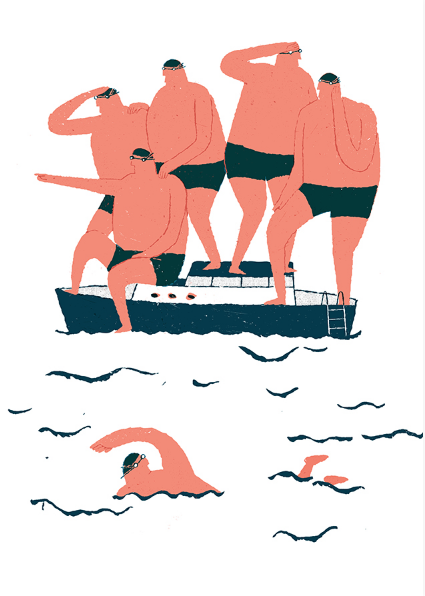 Can you tell us how you achieved the rough look and feel based on newspapers and footage?

So I had this old cardboard box that was kept under my parents’ bed, covered in dust and full of these piles and piles of maps, photocopies, letters from team meetings, photographs, personal letters, books on swimming techniques, I could go on. I was really blown away by how big of an event this was and how much information I had that probably no one else did.
I played around with these ideas for a while but I decided to take some of these objects, like the newspaper articles, and re-illustrate the photographs. They had a really unique feel to them. The fact that they were from their time and kind of preserved in this box really drew me in. On the backs of the clippings there were ads for places like Clery’s, ads where you could phone in to order Speedos, and ads for ferry tickets to Holyhead. They were a glimpse into Dublin in the 90’s which I really loved. So I wanted to bring this out in the project, redrawn in my own way to almost create this other world where this whole story was unfolding at the very centre.
Then the footage was a whole other ordeal. I had these video tapes and no way to play them for a while. One of these was a documentary made by a man named John Cook, which documented the first of the three attempts, which failed due to some of the harshest weather conditions you’ll see. I must have watched it dozens of times. In a similar way to the newspaper clippings, the acts of sitting there rewinding tapes and seeing the colour offsets and other effects that you only get with VHS tapes took me back a little bit and made me want to push this idea of the time of the swim. 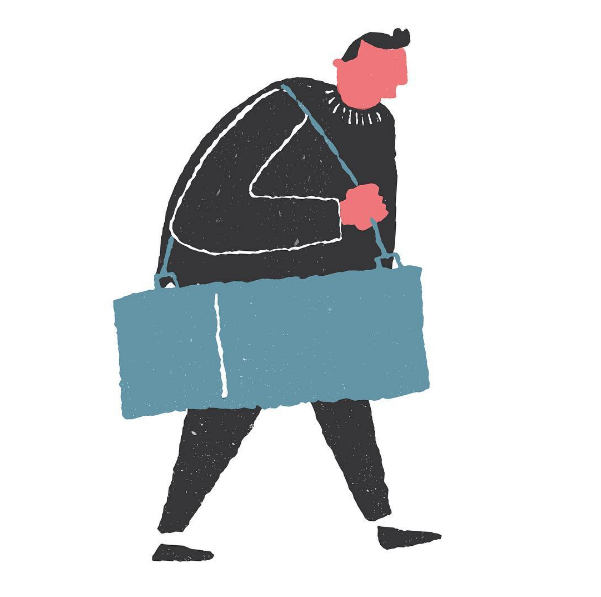 The project translates into animation and a book. What were the different obstacles or challenges between the two? Which was your favourite medium to work in?

The book was what actually came first. After interviewing my Dad and having spent all this time drawing all these swimmers, I started to piece together this timeline of the swim as my Dad described it to me, using my own drawings and parts inspired by the objects from the box. A large part of what I was doing was trying to convey what it feels like to be in the water in such challenging conditions.
The animation was a very different process. Throughout the early stages of the project I was making the book and figuring out the whole visual language of the project to find out how the story needed to be told, and by the time I was animating, I had a clear idea of what I wanted to do. The concept for the animation was to use looping images to reflect the sense of repetition and relentless that swimmers feel being in the water for so long. There was this one book I had about teaching swimming, which reduced all the strokes down to simple movements and stages, and I wanted to use simple movement throughout the animation to bring out the fact that swimmers think in this way, in these movements.
The whole process of the animation was very different to print as the issues I was dealing with weren’t necessary narrative-related, but more to do with getting these swimmers to move like people move in the water, and really bring them to life in a way that print couldn’t. In this way it was really rewarding. Bringing it full-circle and putting the animation onto a VHS tape was also a big milestone for the project, I felt, as it really brought the imagery back to its roots. In some ways the animation was really the most enjoyable part but I think print is something that I’ll always have a passion for. 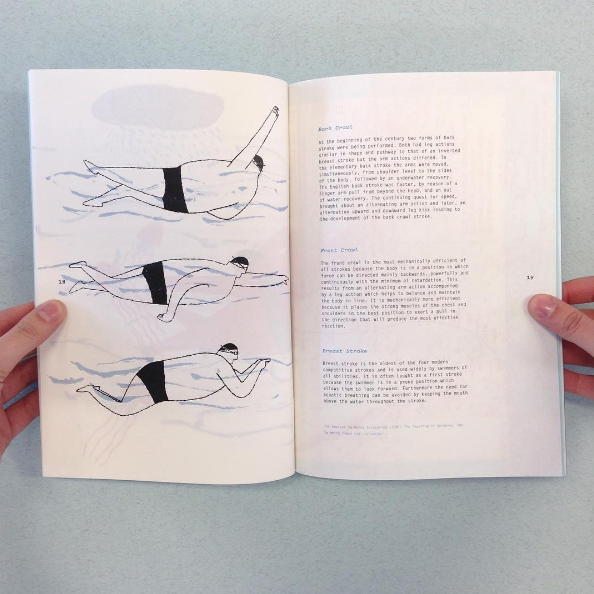 How was your time at NCAD?

NCAD was a tough time, but really rewarding. With our year being the first to experience the three-year degree, I think there was a general air of unsureness at times for students as well as staff; but this was a big motivator for a lot of people, I think. The fact that we had to get ourselves to graduate standard with one less year of education really made people knuckle down, especially in the final year. I learned a lot there. It’s a really great learning environment, especially with tutors as willing as we had. 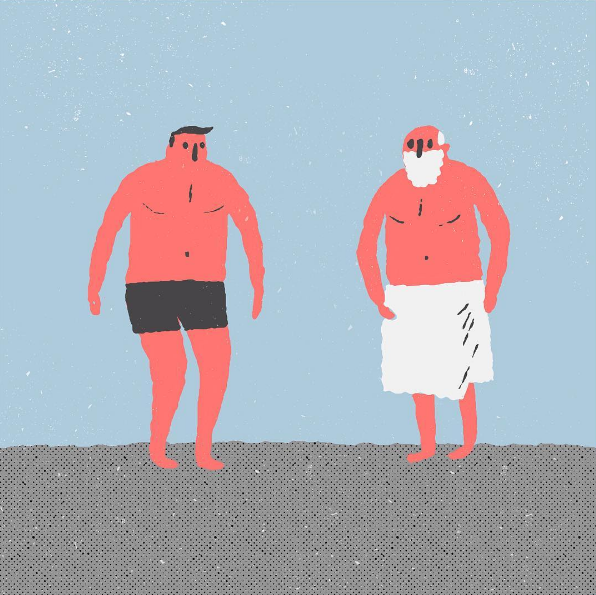 Where do you take your inspiration from?

Honestly I try to find inspiration in everything, in anything really that I can get a drawing out of, to keep pushing forward and making more, drawing in new ways or using new colours. When I’m working without a brief I try to take in as much as possible and take from things around me, especially while in Dublin. I’ve an ongoing series of portraits of people I see in the street that I’m starting to screen print, which is a lot of fun. I try to think short-term and have a few small ideas that could become zines/books, which is actually how this project started itself.

So you’ve just graduated. Scary question – where would you like to be in 10 years?

Honestly I just want to get the ball rolling for now and do some personal projects that I’ll enjoy and can play around with. But the more long-term goal is being a freelance illustrator. I always feel like that seems a little underwhelming when I say it to people but honestly all I want is a desk and a dog and to be able to draw for a living. So hopefully that’s where I’ll be in 10 years!

Lit Review |77| Poetry on the Move

The Complicated Relationship Between Abortion and Catholicism