Why #WakingTheFeminists was so much bigger than theatre

#WakingtheFeminists, the movement catalysed by The Abbey Theatre’s 1916 commemorations, is winding down the public campaign which drew the world’s attention to the lack of women in Irish theatre.

In reality, the 1916 commissions were really just the straw that broke the back of the metaphorical camel; women in theatre in Ireland had long been sidelined. The Abbey director hit back to initial criticisms about the lack of women in his programme with an ill-judged tweet in which he said “Since 2008 we produced 3 plays by Marina Carr, 2 plays by Stacey Gregg & plays by Elaine Murphy, Nancy Harris, Carmel Winters, Mary Rafferty.” But in that time, the Abbey produced 75 plays by men.

One of the founders of the Abbey, Lady Gregory, was a woman. Modern women pay taxes and a national theatre should be doing better, not worse, when it comes to equality. All of this made the inequality within The Abbey more galling, but since I started going to theatre in 2011, I’ve never seen gender equality as the norm. I very quickly got tired of going to shows in which there were hardly any women, and the few women onstage could too often be described as pretty but boring. In Dublin, I’ve seen shows, written by men, claiming to be about women’s issues, but which miss the point so completely they are sexist in themselves. Last year I saw a play in which the entire story was about a woman – in a play written, directed and performed exclusively by men.

It’s true that theatre may not be a mainstream interest, and at first glance, Irish feminists have much more urgent concerns. But there is a bigger picture, and that bigger picture is that even if the theatre world is small, gender inequality doesn’t exist in a vacuum.

I wasn’t at the #WakingtheFeminists ground-breaking first meeting in 2015 because almost all of my energy and time were consumed by a PhD in cancer research. But during that time I was acutely aware of the many ways Irish women weren’t, and still aren’t, on the same playing field as Irish men. From the way I saw women outnumber men in science at every level but the top, to the fight to repeal the 8th Amendment and build a healthcare system based on evidence rather than religion, to reports of gender pay gaps and the embarrassingly patronising Rose of Tralee, women aren’t equal in society. When #WakingtheFeminists kicked off, I saw it all as being linked; the lack of women onstage coming from a place where our stories weren’t considered as important, or as entertaining, as interesting or as funny as men’s.

In Dublin, I’ve seen shows, written by men, claiming to be about women’s issues, but which miss the point so completely they are sexist in themselves.

Ireland’s treatment of women past and present is terrifying if you scratch beyond the surface of our otherwise forward-thinking society. Last week was the anniversary of Ann Lovett, a fifteen year old schoolgirl who in 1984 apparently carried a pregnancy to term without anyone noticing in her home village in Longford. She left school during a wild January lunchtime and gave birth in secret and alone under the eye of the local Virgin Mary statue.

Both children – mother and baby – died of cold and shock. How could such a young girl be completely without support at what must have been such a terrifying time for her? How could so many women have been shut up in slave laundries? How can the 8th Amendment still exist when it has undeniably and to everyone’s knowledge killed women – and given us a culture where a woman who aborts a pregnancy by rape could spend five times as long in prison as her rapist (rape sentences average 3-5 years, in 2013 laws were passed to make abortion punishable with a 14 year prison sentence) and where the HSE can force pregnant woman (even those who intend to carry wanted, healthy pregnancies to term) to undergo medical treatments they do not consent to?

The answer to all this is that Ireland prefers its women silent.

We have a long history where women were not heard, and not much seen either. We don’t need to delve into obscure historical archives to know how common it used to be for women to die in childbirth. We just need to talk to our grandmothers. Before the 8th Amendment came in, an American priest was imported as a kind of anti-contraception and anti-choice evangelist, who was noted for carrying a preserved foetus in a glass jar into primary schools.

When #WakingtheFeminists kicked off, I saw it all as being linked; the lack of women onstage coming from a place where our stories weren’t considered as important, or as entertaining, as interesting or as funny as men’s.

As writer Emily O’Reilly wrote in her account of the lead up to the 8th Amendment Masterminds of the Right, the suffering of women who suffered from too many pregnancies and died in childbirth wasn’t something that could be hawked about in a glass jar; it was suffering that the country kept private, and when it could, silent (but not always; one of the first victims of the 8th Amendment was refused cancer treatment – even for pain – because she was pregnant. Her husband visited her in hospital and could hear her screaming from three floors away). I believe that this country has matured since the 1980s, but I don’t think it has matured enough. Having been involved in pro-choice activism, I can say that one of the most frustrating things about conversations about the 8th Amendment is how quickly people start philosophising (“How do we define life, anyway?”) even when directly faced with the lived experiences of women who have been hurt by the Amendment that means a cluster of cells trump the needs and rights of a living woman from conception.

Abortion is a burning issue in Ireland, but I doubt there’s a single feminist anywhere who hasn’t had someone ‘play devil’s advocate’ with them, in so doing often putting their opinions over the lived experiences of others.

A culture of not giving women a platform, not putting women’s stories centre stage, in the theatre or in life, is what created #WakingtheFeminists, and why we – everyone, not just theatre professionals and aficionados – needed it.

I write fiction for entertainment rather than for protest, but my frustration at not seeing enough women centre stage usually comes through. My first play, Scabs (10 Days in Dublin and subsequently Theatre Upstairs, 2013), was written about the women of the 1913 uprising – despite feminist intentions, there were five men and just one adult woman in the story. In hindsight, I think I wrote a male-centred play because that was what I was so used to seeing that subconsciously, my idea of what drama was had become male-dominated. Before #WakingtheFeminists, I wanted to write a few more strong women for the stage, but I didn’t realise how important it was. When the campaign kicked off I vowed anything else ingrate would have at least 50% women.

The women in my next play, NIGHT SHIFT, aren’t necessarily pretty or always likeable, but I’ve tried to make them interesting. 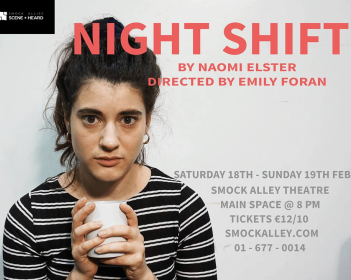 I wrote three different stories and it felt very ‘Irish’ to put them together by having the three private dramas play out simultaneously in a public space. How many times have we eavesdropped on an argument, knowing we shouldn’t? It wasn’t my intention to write a play about gender inequality but it crept in, for the most part unnoticed, as it does to life. Grace is driven and hard-working, her husband much less so, but he still resents her being the main breadwinner. Having ‘rescued’ Caroline from a violent relationship, her brother belittles her and constantly talks over her, even when she’s trying to offer the very explanations he’s demanding. John tries to get out of an awkward situation by patronisingly telling his wife she’s overreacting.

A lot of sexism is unconscious and unnoticed, and if more women’s stories were given the same platform as stories by and about men, more of us would stop to think about the things that need to be addressed in the world, and our own behaviours.

They might be wrapping up their public campaign, but #WakingtheFeminists certainly woke this feminist.

NIGHT SHIFT – What the fuck do we do now?

Kate’s attempts to confront her husband’s ‘problem’ go hilariously wrong. But the others in her all-night café have darker secrets, bigger problems. A daughter on the run. A brother and sister in search of escape. Their personal dramas are about to boil over…

Night Shift is a comedy (black, 2 sugars) that asks: how well do we really know those we know best?