Waking the Feminists: Here’s to the Estrogen Rising and Pressing the F*ck It Button

“‘Waking the Nation’?! WTF?” – the response of many to the just-released Abbey Theatre – Ireland’s National Theatre – 2016 Centenary programme on 28 October 2015. This centenary programme showcased a 90% male-authored event, and ironically, birthed one of the greatest feminist events in recent Irish history – the formation of #WakingTheFeminists.

Nationally, the commemorative 1916 Easter Rising programmes in Ireland are similarly disappointing, and significantly – inaccurate. They suggest an almost total absence of female involvement. When they are acknowledged, they are bracketed off and referred to as ‘women’s history/politics/literature’ etc, i.e; not nationally-focused, but some tokenistic tangent tacked on at the end. These events offer comfort to conservative ideals rather than utilise any radical potential inherent in this moment. They do not speak to the future of Ireland – a vision for the future which should have been collective, equal, and democratic.

In this sense, no wonder the Abbey produced the programme it did – it reflects the thinking and practices of major institutions in modern and contemporary Ireland. Thankfully, the Estrogen Rising has shown its face, so eloquently named by Charabanc co-founder Eleanor Methven, who admitted on Thursday that while she must have had chronic insomnia since the 1970s, she is so pleased feminists are waking in their droves in the present moment.

Individually, each play and revival programmed has great merit and is worth producing. However, as a centenary programme claiming its mission is to “interrogate rather than celebrate” the events of 1916 which led to the creation of the Irish Free State in 1921-2, it instead produced a programme of privilege, telling the story of the unchecked elitism that stifles contemporary Irish society. It tells the story of the power structures in place that are deeply embedded in every aspect of Irish life – the arts, government, religion, commerce, and education. These structures are supported by attitudes and traditions which limit, humiliate, subordinate and devalue female lives, further reified by the 1937 Constitution, Bunreacht na hÉireann, and indeed political and social cultures in Northern Ireland, or the north of Ireland, should you refuse to recognise the British Empire.

As a centenary programme claiming its mission is to “interrogate rather than celebrate” the events of 1916 which led to the creation of the Irish Free State, it instead produced a programme of privilege, telling the story of the unchecked elitism that stifles contemporary Irish society.

And yet, when taking my BA Drama, Theatre and Performance students on a tour of the Town Hall Theatre in Galway last week, the theatre’s director brought us to view a photograph of the republicans involved in the struggle for Irish independence that was taken at the theatre building in the early twentieth century. From a brief glance, almost 50% of the photograph were women – they were there; planning, fighting, sacrificing, surviving. So, what happened? How did they get written out of the Irish narratives of then, and since then? Who does patriarchy serve? And when does patriarchy, complex as it is, cross a line and morph into misogyny?

On 12 November 2015, patriarchy, misogyny and normalised established practices of gender inequality got called out on the main stage of the Abbey Theatre – the very site where they have come to be reaffirmed and reproduced rather than challenged or called to account. Women and men – and wow, the support from male artists was overwhelming – stood together in solidarity and in joy.

Almost 50% of the photograph were women – they were there; planning, fighting, sacrificing, surviving. So, what happened? How did they get written out of the Irish narratives of then, and since then?

As the engaging, intelligent, brave, queer playwright and director Amy Conroy put it, “No ifs, ands, or buts.” As theatre director Laura Bowler powerfully delivered her spoken word testimony, “Why are dead men still getting preference over living women?” As dramaturge Tanya Dean succinctly concluded following her 5 C’s, “It is systemic. It is cultural.”

These women are only a snapshot of the hundreds who climbed out of their feminist closets on Thursday, finally welcomed onto the main stage by set designer and arts manager Lian Bell, the legend who started this party. She declared, “Welcome to our national theatre.” She voiced the experiences of many, discussing how on reflection of the Abbey 2016 programme and its gross absence of female artists, she realised she was tired of “quiet conversations in corners” and started posting her frustrations online. She wanted the conversation to be louder, and centre stage.

Commenting that she did not realise that she had this much anger and frustration inside her about the situation, Bell found that apparently she does, and we all do. This point was picked up quite frequently, particularly by director Maeve Stone, who voiced Irish playwright Marina Carr’s own sentiments on her recently revived By the Bog of Cats (1998).

The rage in women is terrifying (…) That rage doesn’t come out of nowhere. The rage comes out of being said no to just one time too many (…) Women’s rage turns inward most of the time. How wonderful to be able to burn down the whole world. Even if it is only a stage. 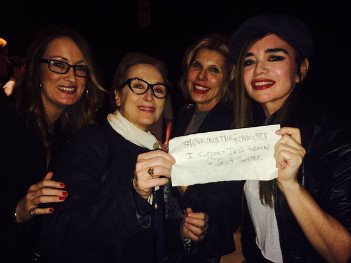 This anger was on the boil for Bell for quite a while, and needed to release steam. Two weeks ago she sat alone at her computer and thought “Fuck it. Press send.” Pressing the f*ck it button is something that has gained traction for instigating social change internationally.

Also a line in Irish playwright, comedian and actress Sonya Kelly’s acclaimed How to Keep an Alien (2014), pressing the f*ck it button offers those marginalised a way to bypass the processes that are embedded with the discriminations working to suppress them. We owe a lot to social media and digital platforms for this. It is this immediate reaction and platform that – while dangerous – also offers the potential for reward, such as international response, including online support from Meryl Streep, Christine Baranski, and Nicole Kidman.

Renowned affect theorist Sara Ahmed talks of ‘feminist killjoys’ and ‘unhappy queers’ in her influential essay ‘Happy Objects.’ Ahmed’s research is incredibly pertinent to this moment and these experiences. She asks:

Does the feminist kill other people’s joy by pointing out moments of sexism? Or does she expose the bad feelings that get hidden, displaced, or negated under public signs of joy? The feminist is an affect alien: she might even kill joy because she refuses to share an orientation toward certain things as being good because she does not find the objects that promise happiness to be quite so promising.

Patriarchal traditions support the pervasive spread of the ‘feminist killjoy’ rhetoric and symbols as a boon to the continual reproduction of its power networks. Waking the Feminists online encounters and the public meeting at the Abbey usurped the symbol of feminist killjoy, blazing an imprint of feminist joy in its stead. 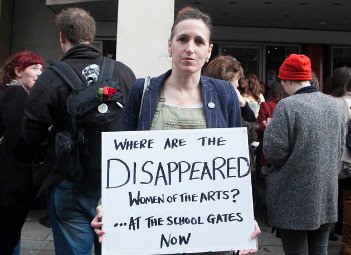 The joy was uplifting, infectious, electric. The joy was reminiscent of what leading feminist theatre scholar Jill Dolan refers to as ‘utopian performatives’ in her landmark Utopia in Performance: Finding Hope at the Theater (2005). Utopian performatives refer to “profound moments in which performance calls the attention of the audience in a way that lifts everyone slightly above the present, into a hopeful feeling of what the world might be like if every moment of our lives were as emotionally voluminous, generous, aesthetically striking, and intersubjectively intense.”

When women far and wide shared their experiences in the same live time and space, a very clear picture emerged of how discrimination is facilitated to operate in contemporary western cultures which commit to equality in words, while finding new paths to subjugate women through deeds.

All the encounters women felt individually throughout their careers were voiced as a collective. It became clear that each individual encounter of gender discrimination – from unconscious dismissal to conscious misogyny – could be explained away through the manipulation of language and influence. However, when women far and wide shared their experiences in the same live time and space, a very clear picture emerged of how discrimination is facilitated to operate in contemporary western cultures which commit to equality in words, while finding new paths to subjugate women through deeds. It is this nexus – of open commitment and well-managed and protected discrimination – that became visible, and validated as pervasive for women.

This article concludes by giving the final say to #WakingTheFeminists‘ mission statement. The focus, energy and attention must turn to the future for substantial changes to occur. We must ensure that the 12th of November 2015 was not a further successful exercise in lip service.

#WakingTheFeminists calls on the board of our national theatre to lead the way in establishing equality for women artists.

–       A sustained policy for inclusion with action plan and measurable results.

–       Economic parity for all working in the theatre.

Dr Miriam Haughton is a lecturer in Drama, Theatre and Performance at the National University of Ireland, Galway. Her co-edited collection Radical Contemporary Theatre Practices by Women in Ireland was recently published by Carysfort Press in 2015, and her monograph Staging Trauma: Bodies in Shadow is forthcoming with Palgrave. Miriam is co-chair of 1916: Home: 2016, a voluntary multi-disciplinary initiative dedicated to coordinating academic and artistic responses to marginalised histories in 2016, and a supporting member of the National Womens Council of Ireland.

Acceptable in the 90s – The power & glory of the Blockbuster Song