The Price of Irish Drink: Tourism Deterrent or Health Risk?

In Ireland, you can buy a bottle of whiskey for a little under twice the price you would pay for it in the United States. At least, that’s according to the Support Your Local campaign, who compared Dublin airport’s duty free price of a one litre bottle of Jameson to that of an off-license in California. The difference is €15.09. That’s a lot. In the Jameson Distillery, you could actually spend up to €400 on one bottle… Presuming you had excess amounts of cash to throw around and were a little bit mad. It begs the question as to why so many American tourists, and tourists in general, are bothering to waste their cash on some drink they could easily secure for about half the price in California’s Total Wine and More store. Apparently, you could pick up a litre for $29.99 – that’s good value.

Alright, that may only be the price of Jameson in one off-license in California, but the Support Your Local campaign compared it to lots of others in The States too, and the price differentiation rarely fell below €10. I’m sure there are plenty of places in America that charge well over The Loop’s staggering €41.70 for a bottle of whiskey, but that doesn’t mean these comparisons are meritless. If anything, they prove that alcohol is really, really expensive in Ireland. Sure, we all knew that. We’ve all ended up inwardly sobbing at the bar while getting charged nine quid for a vodka Redbull. It happens. (A lot.)

But, what these comparisons also prove, is that most tourists are seemingly still willing to pay these insane prices while on holidays. In 2013, 80% of visitors to this country cited alcohol, the Irish pub experience, or Temple Bar in general, as one of the primary influencers of their holiday destination. In the same year, Fáilte Ireland discovered that the whole world spent more money on food and drink in Ireland, than they did on sightseeing, entertainment, transport, and shopping combined. You’d be hard to come by any non-Irish person who didn’t automatically associate drink, pub culture, and being absolutely pissed drunk with Ireland. It’s a (potentially unfortunate) stereotype that has somehow become a supposedly inherent part of ‘Irish culture,’ and we’ve cashed in on it. Big time. The Guinness Storehouse was the country’s number one tourist attraction last year. Over a million people visited it. And why not? It’s only €18 a ticket. What else would you be doing with your money?

So, if people are still paying the price, and Irish tourism is still booming, then what’s the problem? 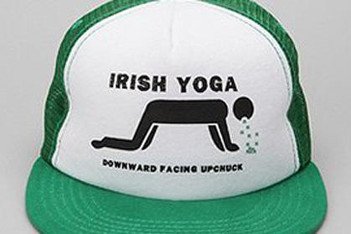 General Manager of the Jameson Distillery, Ray Dempsey, claims that many tourists have been deterred from returning to Ireland because of the price of drink. According to him, the country is in desperate need of a reduced alcohol excise tax, lest the industry suffer the consequences. Speaking to Matt Cooper yesterday, Dempsey stated that the potential rising cost of alcohol is “the biggest single threat to whiskey tourism in Ireland.” Fáilte Ireland’s Paul Keeley expressed a similar concern when he urged for all sectors of Irish tourism to come together, and continue to make the country’s alcohol related attractions as “authentic, compelling, and memorable” as possible.

But despite all this talk of Ireland’s thousands of annual visitors coming over here and spending their hard earned cash on excessively expensive (and somehow more authentic than what you’d find in an off-licence in California) whiskey, those criticising the excise tax failed to reference the one group of people who spend the most money on alcohol in this country – the Irish people. Chief executive of Alcohol Action Ireland, Suzanne Costello, claims that the country does not depend on pub culture and cheap drink to survive, and that the supposed waning of the tourism industry is simply being used as a smokescreen to deter from the real issue at hand – the health and safety of the Irish population.

“The reality is that this campaign is about selling alcohol and the cheaper it is, the more of it will be sold, with hugely damaging consequences for health and wellbeing in Ireland.”

I mean, she’s got a fair point. The cheaper alcohol is, the more of it you’re going to consume. That’s basic science (kind of). I for one know that if a pint in a pub is €3 I’m going to be absolutely delighted, drink about five of them, and spend the next day lying around complaining because I feel sick and nobody will bring me a chicken fillet roll. But I also know that if a pint isn’t €3 in a pub, and I go to Tesco and buy a bottle of rosé for a fiver, I’m probably going to end up feeling more sick, more in need of deli food, and more sad because I spent the night drinking in my house alone instead of out somewhere with actual people being an actual sociable human being. Which was also the point of the folks down at Alcohol Action – they want people to drink in pubs, where they’ll be safer, surrounded by people, and not getting (completely) locked because of the excise tax being what it is.

According to a report conducted in 2013, over half of Irish alcohol consumers were classed as ‘harmful drinkers’ – with the majority being under the age of 35. The report concluded that most people didn’t even know they were binge drinking, because consuming excess amounts of alcohol has become so normalised. So by Costello’s logic, keeping the excise tax just the way it is should ensure people are still drinking in pubs, but deter them from drinking too much in those pubs.

Except, J.D. Wetherspoon are planning to open a further 30 new pubs across the country over the next 5 years… And their alcohol is cheap. Like, seriously cheap. Cheaper than Lidl and Tesco cheap. And they sell fairly good chicken wings. So, y’know, people are going to go there, eat food, get really drunk, be sociable, but most of all – get really, really drunk. Which isn’t really doing much for the old health issue… But it’s keeping people in pubs, right?

Whether or not the tourism industry is being used as a smokescreen to deter from a bigger issue (it probably is, let’s be honest), Irish people are not going to stop drinking. Neither are Americans. Or anyone else around the world, for that matter. You can spend €400 on a fancy bottle of Jameson on your holidays, or you can pick up some Tesco value rum for a tener… The result remains the same. People are not going to stop visiting Ireland because the excise tax is too high, but people will continue to destroy their lives with alcohol. Maybe we all just need to have a little more self control. Or maybe, as a nation, we would be a lot happier if pubs stopped selling crappy pints of Guinness to unsuspecting tourists for €6 a pop. Only time will tell…

An Introduction to Jazz in 11 Tracks