The Suffragette movie has opened in cinemas across countries this week, to something of a rocky reception – one which has arguably been earned. Many voices have risen in protest at the choice of the film’s cast, which can hardly be said to accurately reflect the suffragette movement of the time. While it is to be commended that the struggle of the working class woman has been examined, eyebrows have been raised at the lack of women of colour in the film – not to mention the cast’s recent ill-advised photo shoot where they wore T-shirts bearing the legend “I’d rather be a rebel than a slave.” 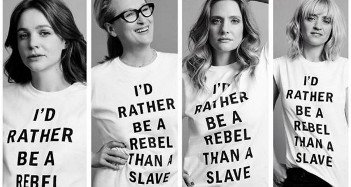 People of colour are constantly being white-washed out of films, but when it comes to historical movies, their creators try to cling to the excuse of ‘historical accuracy’ when defending their choices. This is done despite more and more evidence coming to the fore that – believe it or not – non-white human beings have been getting around everywhere for just about forever.

It doesn’t take much thought to realise that women of colour must have been involved in the suffragette movement – yet their presence is studiously ignored by this film.

Chevalier de Saint-Georges, the first classical composer of African ancestry, was invited to play music with Marie Antoinette. Countless photos exist which act as solid proof that there were individuals of colour living, breathing and existing in England during the Victorian era, such as those in the 2014 exhibition Black Chronicles II. Blogs have been set up to amass and chronicle the presence of people of colour in European artwork across the ages, like that of medievalpoc. With an awareness of that presence, it doesn’t take much thought to realise that women of colour must have been involved in the suffragette movement – yet their presence is studiously ignored by this film.

The fact of the matter is, while race was more of a prevalent concern for American Suffragettes, it was by no means a non-issue in Britain. God knows we all love Meryl Streep, but Emmeline Pankhurst’s “I’d rather be a rebel than a slave” quote is discomfiting for a myriad of reasons. ‘White feminism’ is a term used to describe when something is hailed as a feminist triumph, yet cringingly ignores its lack of POC representation, or its own racist undertones.

See for example, the criticism levelled at Lena Dunham’s TV show ‘Girls.’ The fact that the cast of the Suffragette film (or their stylists, or whoever) thought that it was appropriate to wear t-shirts with the slogan “I’d rather be a rebel than a slave,” while publicising a movie with an entirely white cast, seems like a direct stumble into that realm – well meaning, but ultimately ignorant.

It ignores the historical context of the film, and the fact that many British suffragettes were gung-ho supporters of the British Empire. Norah Dacre Fox, for example, went on to join the British Union of Fascists. She believed in British racial and political superiority. Even Pankhurst herself was pro-Empire and very conservative in her later years, stating in a letter “Some talk about the Empire and Imperialism as if it were something to decry and something to be ashamed of. It is a great thing to be the inheritors of an empire like ours.” 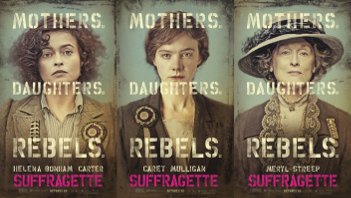 When you are aware of the history of the British suffragette movement, it is the absence of the Indian women who fought to promote equal rights which stands out in this film. At that time, there was a growing population of Indian people in Britain, and initially many British high society feminists regarded Indian women as passive victims to be rescued. A change in this slightly condescending attitude came about as Indian women became more outspoken; not only in the suffragette moment, but also in the movement for Indian’s independence from the British Empire. By 1905, Indian women were openly demonstrating their public support of various political activities.

One individual that I personally would shell out bucks to see a biopic of is the Indian princess Sophia Duleep Singh. The daughter of Maharajah Duleep Singh – a favourite of Queen Victoria – Singh was a regular guest at Buckingham Palace. Not only was she the Queen’s goddaughter, but she was a regular feature in Britain’s society pages, turning her into something of an exotic fashion icon. She could have led a life of luxury and pampering, but instead sacrificed everything to fight for British women’s right to vote alongside Emmeline Pankhurst.

Singh was hugely active, and was a very well-known face within the suffragette movement. Pankhurst became conservative in her later years, but at that time Sigh was one of her closest friends, and kept company with the inner circle of suffragettes. In 1910 she marched at the head of the Black Friday deputation to the Houses of Parliament, protesting the paper shuffling and delays involved in reading a bill in Parliament that would give women the vote. This protest ended in police violence and the death of two suffragettes.

Singh wrestled with police, refused to pay her taxes, supported suffragette arsonists, spoiled her census, and even threw herself at the Prime Minister’s car – all in an effort to get women the vote.

Singh was your grade A rock star suffragette. She wrestled with police, refused to pay her taxes, supported suffragette arsonists, spoiled her census, and even threw herself at the Prime Minister’s car – all in an effort to get women the vote. On 14 June 1928, she became the President of the Committee of the Suffragette Fellowship following the death of its founder, Emmeline Pankhurst

In an open response to the criticism leveled at the lack of representation in the film, director Sarah Gavron explained why she didn’t include Indian suffragettes. Speaking in an op-ed, she said:

The census records of the early 1900s do not record ethnic diversity, but judging by names, the photographic evidence and written accounts, it appears there were just two women of colour who joined the UK movement.

All right, fine. Let’s accept that excuse at face value. So where are these women? Is it not strange that the response is to just leave those women out entirely, as opposed to thinking “Wow women of colour bravely entering into a white dominated movement that is already condemned by general society! How brave!”

In response to Gavron’s statement, a photo from the Women’s Coronation Procession in 1911 has been making the rounds. The photo, courtesy of the Museum of London, features a group of Indian suffragettes, who stand proudly in their saris, holding a banner stating INDIA aloft. 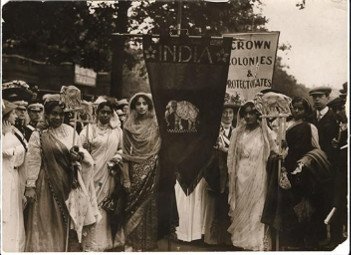 Even if we accept that none of the main characters in the movie could possibly be anything other than white, that still doesn’t excuse the sea of milky pale extras throughout the film. During the early 20th century, east London was a prime location for migrant and ethnic communities, and the fact that there is apparently one squint-and-you’ll-miss-it black extra in one of the laundry scenes doesn’t really cut the mustard.

And then of course, there’s the final wincing inaccuracy at the very end of the film. As the movie comes to a close, a timeline states that in the US all women got the right in 1920. Nope. Wrong. Go to your corner and think about what you did. White women got the right to vote in 1920. Black women and men in the US wouldn’t be free to put their votes into a ballot box for another 35 years. It looks like people of colour are going to have to wait that long again before they start seeing their stories being told on the big screen.

Méabh de Brún is a writer, actress and professional hot mess. She has a degree in International Law, a Masters in Writing and recently finished a turn as a member of the Gaiety Performance Theater Company. She also plays the ukulele. No big deal.

Welcome to the Cave: Where Art and Literature Meet