This is what Dublin advertising agency, Girls and Boys, have produced in order to raise awareness for hunger and poverty around the globe – a labelled bottle that’s completely empty.

According to Chris Upton from Boys and Girls, Hunger Sauce encapsulates the agency’s philosophy of daring simplicity.

Alongside Gorta-Self Help Africa, Boys and Girls are selling their Hunger Sauce on World Food Day to highlight some stark inequalities existing around the world. When it comes to food, Ireland’s been generally alright for awhile – we don’t have too much to worry about. World Food Day operates to ensure that we don’t forget about those 795 million other people who are less than alright – they’re starving.

First established in 1979, World Food Day has been taking action against hunger and poverty for over 30 years now. Each year, it takes place on October 16th, and has been consistently recognised by almost every country in the world.

This year, Girls and Boys and Gorta have teamed up to bring you Hunger Sauce. For just €2, you could pick up your own bottle of the condiment that everybody’s talking about… But only a select few of us are privileged to have enough of.

On the significance of the campaign, CEO of Gorta-Self Help Africa, Ray Jordan, says “We speak in this country of hunger being a powerful sauce and this initiative articulates that sentiment in a powerful way.” 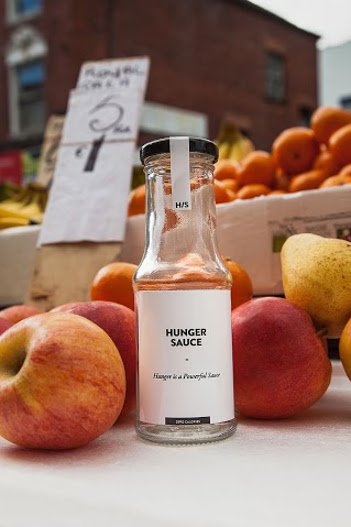 It sure does, Ray. The empty bottles of Hunger Sauce not only represent the severe lack of food that many are expected to go without in their day to day lives, but they also place emphasis upon the millions of human beings who are currently dying of starvation and malnutrition. Every year, almost 5 million children under the age of 5 die from hunger and nutrition related diseases. As well as this, 4 in 10 children growing up in poorer countries are so malnourished that their bodies and brains have been severely damaged.

World Food Day is a time to take action against global hunger. To be a part of the solution, you could buy some Hunger Sauce for €2. A limited number of them will be on sale in Dublin. You could also donate €2 to Gorta-Self Help Africa by texting HUNGER to 50300. You could also check out hungersauce.ie to learn more about the campaign, and see what other things you can do to help.

World Food Day has been particularly active in North American, where grassroots events, hunger walks, and food drives have been combating hunger for decades. So get yourself a bottle of Hunger Sauce today, and combat it here too.