Starting the Conversation with Saharcasm

Some conversations are harder than others. We put them off all the time – awkward ones, difficult ones, uncomfortable ones, ones we just don’t know enough about to partake in. But sometimes, certain conversations are necessary. We need to have them to move forward – which is exactly what Sahar Ali is aiming to do. She’s bringing her first solo show, Saharcasm, about racism and multiculturalism in Ireland, to the Dublin Fringe Festival in September. Intertwining spoken word poetry, comedy, and music through an hour-long show, Sahar’s hoping to start the conversation we really need to have.

Saharcasm has been a build up of a few years of work. It started from Sahar’s own blog of the same name – and now she plans to extend her observations, opinions and outlook to the public.

So what exactly is her show about?

“It’s kind of a close look at the cross-cultural relations in Ireland (…) and what we think they are,” she explains.

“It’s about our relationships between people and how we don’t necessarily deal with people on a one-to-one basis. We first want to know, even if it’s a person from Dublin speaking to a person from the countryside – and I’m talking about a stereotypically white Irish person – they still want to know ‘where are you from?’ because once they know where you’re from or where you’ve studied or what your dad does, they think that they know something about you, quite instantly.”

“They’re looking for that box, I guess, to kind of put you in, and that’s kind of a recurring theme in the show. It’s about those boxes that we put each other in and the fact that we don’t relate to each other on a one-to-one level, even though we think that we do.”

It’s the rigidity and inevitability of these boxes that has made Sahar decide to stay away from focusing on her own experiences with racism and multiculturalism in Ireland, and instead choose to make her show more universal and observational.

“People might presume that (the show is) about me and my own experiences because my name’s in it but I don’t actually talk about myself and my own experiences in it, because of the fact that we don’t relate to each other on a one-to-one,” she says. “We’ll never get to that story because you are not really allowing yourself to, because you’ve already assumed everything about me.”

“You know those dolls that you open and there’s a little doll inside and there’s another little one and another little one and it’s just, like, never-ending? The more people find out about you, it’s just another box that they put you in. Because that’s the way people’s minds work. So yeah, while I was writing it, I was consciously not writing about myself or my own experiences. It was more about everybody.”

Sahar says that many of the commentary she wanted to get across often weren’t translating through comedy in the past, so she turned to another medium.

“Years ago, I did comedy, just for the laugh, when I had the opportunity to do so,” she says. “I did loads of ‘oh Arabs are so silly! Crazy Arabs!’ and people would come back to me after the show and be like ‘oh hey!’ and I was like ‘that’s not okay, you can’t say that’. The messages that I wanted to get across were not translating through comedy but they do translate through spoken word.” 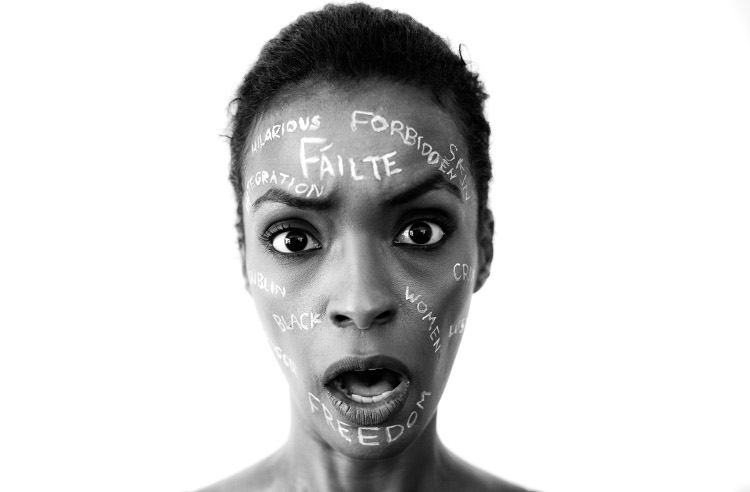 The poetry scene has been a source of inspiration, support and encouragement for Sahar. A long-time member of the Dublin poetry scene, she praises it for its open, empathetic and inclusive nature. “You can see that there’s like a, I don’t want to say ‘movement,’ but there’s something happening in Dublin right now amongst the spoken word community in that it’s political and it’s awake and it listens,” she says.

“Ireland itself has a long history of poetry and poetry and politics are very close together. Speaking through poetry, people listen to you, but not so much with comedy. It’s not something that’s taken very seriously.”

But this doesn’t mean Sahar’s going to leave out hilarity, a huge part of her personality, just for the sake of the message she wants to portray. By intertwining comedy and music with spoken word poetry, Sahar’s blending her personality with the important messages she wants to convey to her audience.

Sahar’s not expecting world domination – not yet anyway. She says she just wants to get people thinking and talking about issues that we usually sweep under the carpet in Ireland. “I’m not exactly hoping for anyone to leave (the show) and go ‘oh, that’s right! I should change my ways and become less of a bigot!’ – it’s not necessarily about that,” she says.

“The one thing I want to do is start a conversation. That’s it. I’m not going on stage and saying ‘these are all of my thoughts and they’re all right’ because maybe they’re not,” she says. “It’s all stuff I’m kind of thinking about. Maybe it’s right, maybe it’s not right. But it’s just things that we don’t talk about and I just want to start those conversations and I want people to be more open to talking about issues or race or religion or whatever it is, because they’re just not talked about.”

Race in Ireland is surrounded by an uncomfortable forcefield of quietness. We try not to talk about it, if we can help it. But Ireland is now a country that is diverse, multicultural and mixed. Often, we find it difficult to address race because we are dealing with such newness, such uncertainty. This is something that Sahar herself is quite aware of.

“It’s a new thing. It’s a new country. This whole mixedness or whatever is all very new,” she says.

She further elaborates on the problems of comparing race in Ireland to countries like America, where issues are long-established, clearer and better understood due to long histories and focused understanding. Of course, good old-fashioned Irish complacency is something that is often hindering serious discussions on race, along with the changing nature of the Irish cultural landscape.

Sahar points out that people in Ireland always think ‘but we’re fine’ in regards to America.

“…Because our gardaí aren’t killing people. It’s still like two different kinds of racism that is faced here and there in America. It’s a completely different thing so I guess we have to understand that this is all very new.”

A few months ago, Sahar took over the @Ireland twitter account and faced enormous backlash. “I got a tonne of abuse,” she says. “The first thing I said was ‘Hi, I’m Sahar!’ and I instantly got a tonne of like ‘you’re not Irish, what are you doing on this twitter account?’ You know, kind of, what’s the word… ‘impurifying the blood of Ireland’ and all this kind of stuff and they photoshopped pictures of me. Ugh, it was just really bizarre.”

“But even then, I got comments and people from Twitter, and I know they have the best intentions at heart, but they would just message me saying ‘ah Jesus, like I’m very sorry about that, now don’t listen to them, you’re totally welcome in Ireland – fáilte go dtí hÉireann. That means: welcome to Ireland’ – and I’m just like, would you not just think for a second that maybe I probably know what that means? And you also spelt it wrong.”

In discussing her own experiences, Sahar highlights two very different kinds of racism that can be found in Ireland: apparent and subtle racism – and it is often the latter kind that is most widespread, most misunderstood and most difficult to see. 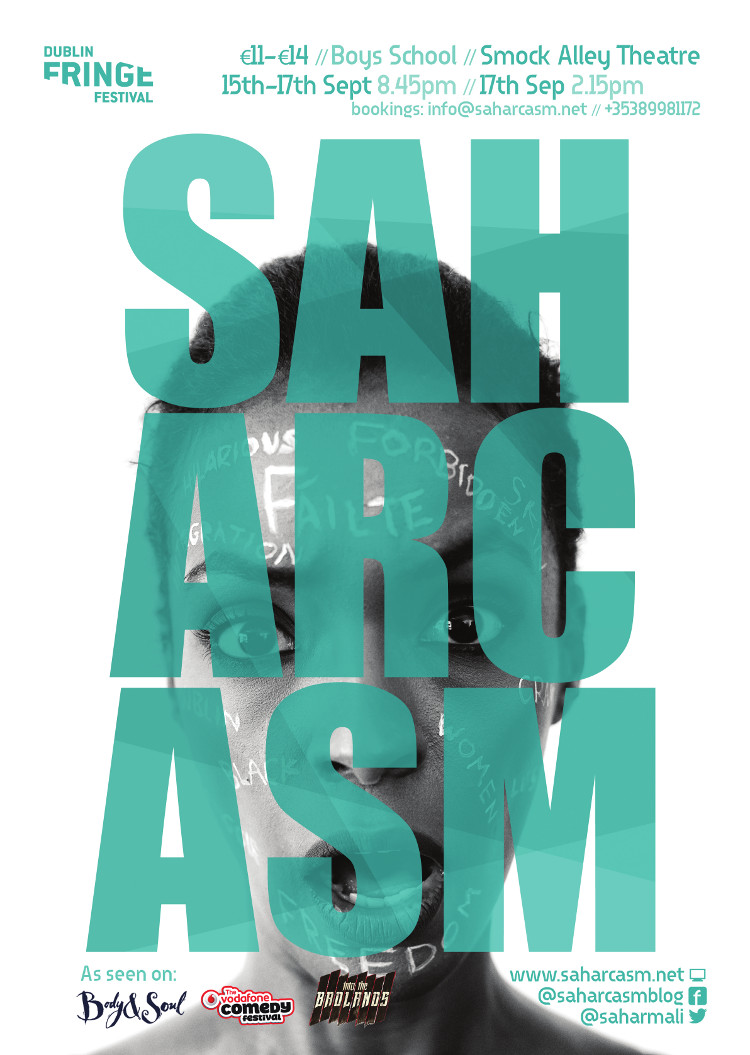 The particularity of Irish racism, with its subtlety and microaggressions is something Sahar is interested in unpacking. “One of the things you get here in Ireland is a lot of ignorant comments and then you’ve got a lot of people saying ‘oh but they don’t know’ or ‘nobody told them,’ or ‘I’ve never seen a black person before,'” she says. “That’s just not an excuse anymore.”

Not addressing racism in Ireland in its overt and subtle forms can also often be a two-way street, when minority groups say they don’t want to disrupt the status quo: “Because we’re living in this world where we think that we’ve integrated well into the society and blah blah blah, we’re not so quick to notice when those issues are happening when they’re happening,” says Sahar. “Because we think we’re better off than people in the US, we don’t understand what’s happening around us so we excuse a lot of it. I’ve had moments where two weeks later I go ‘oh god, yeah, they were being racist!’”

Sahar notes the dangers of living in a world which repeatedly tells us it’s colour-blind and “doesn’t see race.” She says we’re not addressing issues outright like we should, and ignoring societal divides that stretch back centuries.

Being a poet, Sahar is careful when choosing words. But a word she likes? “Racist.”

If we’re going to talk about racism in Ireland, she says, racist is a word we can’t continuously avoid. “People flinch at the word ‘racist.’ It’s like a bad word now. But that’s a word that I really like because I feel like the more it’s said, the more those kinds of behaviours can be stopped,” she says.

“Even a friend of yours can say something (racist) and a friend of theirs should be able to go ‘well, that’s racist’ and then they go ‘oh, what, how?’ and then you tell them how and they go ‘okay, I’m sorry, I’m not going to do that again’ and then we’re past it, we’ve solved a problem right there just because we’re no longer afraid of the word ‘racist.'” Instead of being like ‘what?! I’m not a racist! You calling me a racist?! You don’t know my friend, Jamal?!’”

To have the important conversations we need to have, we need to start using the right words, to stay unflinching in our resolve to speak up, understand and educate. This is what Saharcasm aims to do.

Through her show, Sahar is hoping to start the conversations about race and multiculturalism that we often run away from in Ireland – cups of tea in hand, of course. By blending together poetry, comedy and music and integrating insights, observations, and education, Saharcasm will be an unmissable show. One that is determined to be creative, funny and energetic.

“I mean when it’s a string of poems, you have to really get creative with it because you can’t just stand on stage with a book and read it for 50 minutes,” she says. “It’s a performance. It’s not like a regular spoken word show. It’s a bit more colourful, hopeful and bright. It’s me running around the stage acting like a child high on skittles.”

Saharcasm runs at the Dublin Fringe Festival from the 15th-17th September. Tickets can be purchased here.

Abeeha Tariq is an English Literature graduate and a soon-to-be Business graduate who is also an over-thinker, over-sharer and over-tweeter, with a love for all things art, literature and sparkly.

In The Shower with Taz and Marcus | Trailer

Tales from the Camino: A review of Miriam Needham’s Compostela