Water On Mars: So What Now?

The announcement this week of finding running water on the Martian surface was big news, your Facebook and Twitter feeds were filled with the revelation and people rushed to find the closet Airbnb next to the picturesque rivers of the Red Planet. I jest, the reality of the find is far more subtle.

The “flowing” water on Mars’ surface is more of a trickle than a gushing river of nutrient-rich water that we might first imagine. Don’t get me wrong, a trickle is exciting. Scientists love anything new, even a trickle. One of the first questions that may be asked is “does it support any life?”, but a more important initial enquiry may be “where does it come from?”.

We found out in 2002 that there is a vast amount of hidden treasure under the surface of the dusty red plains in the form of ice. NASA’s Mars Odyssey spacecraft picked up the telltale signs of vast amounts of water ice in the upper regions of the soil surrounding Mars’ southern pole. William Boyton of the University of Arizona, and principal investigator for a suite of instruments onboard Odyssey noted “It may be better to characterise this layer as dirty ice rather than as dirt containing ice”. Ice all the same. Cue excitement. Now, as the news of liquid water floods your news feed, a new batch of excitement, questions and problems are popping up.

Firstly, where does this water come from? There are two main theories to this question. The first, and more obvious theory, is that the water simply seeps from the soil during the Martian summer from the underground ice and escapes downhill. This seems logical but scientists, who are paid much more than me and know their stuff, seem to favour a more likely although less obvious (to you and me) source of the water; the Red Planet’s atmosphere. 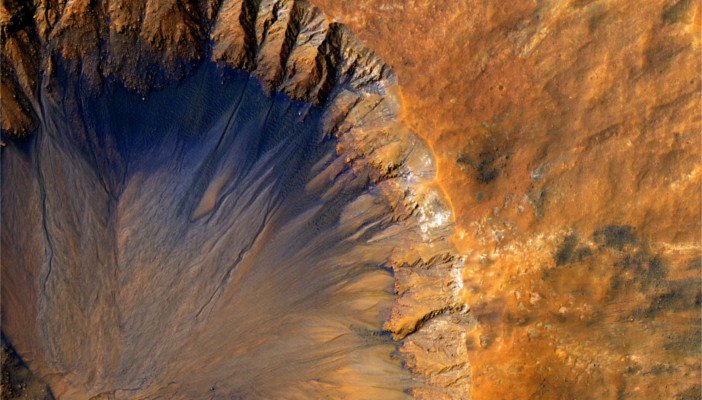 Just like here on Earth, there are salts present on the surface of Mars. And just like here on Earth, its salts can absorb water vapour from the atmosphere, trap it in its crystalline structure and once the Martian summer comes rolling in, the water filled salts melt, producing these flowing streaks. The very same behaviour can be seen occurring in the uber-dry Atacama desert in Chile, where, even in the harshest of environments, microbes can live and breed. It’s called deliquescence – but that word is big and scary, so let call it melty-salt-puddles. That’s easier on the brain.

Next up is the quality of water, will the Earth-Martians of the future be able to fill up their canteens? We know the water is salty so unfortunately not, but what about harbouring life within the water itself? Well that is one of the big questions. Obviously, as our seas have proved, salt water can facilitate all kinds of wonderful life. However, the higher the salt concentration the harder it is for life to flourish. We can see examples of this here on Earth. Our oceans have a salinity percentage (amount of salt) of around 3.5 percent. The Great Salt Lakes of Utah range from 5 to 27 percent and the Dead Sea comes in at a whopping 34 percent. These are all out-salted by the Don Juan Lake in Antartica. With over 40 percent salinity the lake is even too salty to freeze over and harbours no life whatsoever. If the water on Mars is near or even above this level, no life (that we know of) would be able to form and flourish. 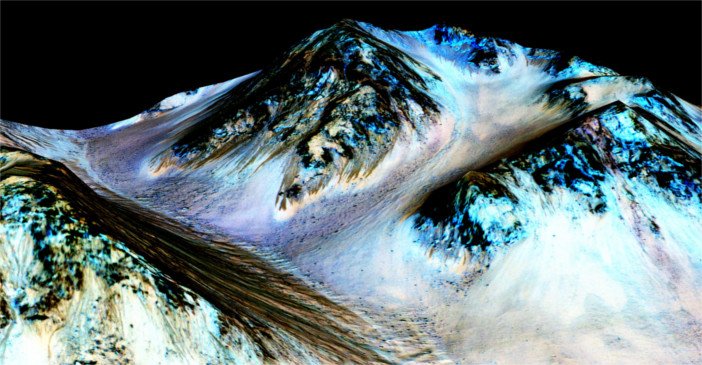 So what is the saltiness (or salinity percentage – if you want to get technical about it) of the Martian water? Well this is again one of the big questions and it brings up a major problem for the “Follow the Water” team. How can we analyse the water without contaminating the water itself? A big worry for the scientists is that microbes from Earth may have tagged along for the journey and if the ultraviolet light and radiation haven’t taken care of them, they very well may contaminate the Martian ecosystem (if there is one). They also could hamper the actual recordings and get us all excited for no reason. The areas where the water has been recorded will now be labeled as “special regions” and Curiosity has been barred. It is a no-go zone. Thankfully Curiosity has a host of instruments onboard and will be utilising the ChemCam laser system to remotely analyse the composition of the salt water, without having to get close.

So we will have to wait and see the salinity percentages, composition and origin of this ground-breaking discovery before we can get really excited (or disappointed), but for now join me in living in a world of optimism and hope as the question, “is there life on Mars?” becomes closer to being answered.

Episode 15 – B. Dolan and Buddy Peace