Do We Really Need A Brain?

This seemingly stupid question is not as straightforward as you might think. Well, of course we do need a brain but it’s not so clear how much of our brain we need to actually survive and function somewhat normally.

Recently, doctors in China reported the case of a woman who was missing a large portion of her brain. The part of her brain which was lacking was the cerebellum, latin for ‘little brain’. This part of the brain although only accounting for 10% of the total brain volume contains around 50% of all the neurons in your brain. The cerebellum, which can (normally) be found at the back of your head, plays a vital role in motor control, particularly in controlling precise movements as the cerebellum receives many sensory inputs and fine tunes motor activity. 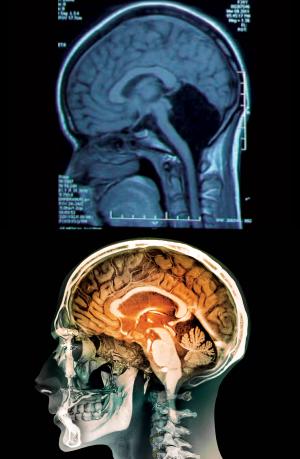 So you would guess that being born without this part of the brain (as is likely the case for this woman, large chunks of brain don’t normally disappear) she would be left severely disabled; this wasn’t the case. This goes to show how ‘plastic’ or adaptable the brain is.

Although these doctors reported that the woman had moderate walking problems and slurred speech, this woman has so far been able to live a relatively normal life, married with a child. A background interview revealed that she had a difficult childhood, not being able to walk and talk properly until the age of 6-7. What is incredible is that she managed to live a relatively normal life with this condition and it’s very likely that other parts of her brain have taken over some of the functions normally carried out by her cerebellum.

This story seems really incredible, the woman is only the 9th person in the world to have been diagnosed with a cerebellar agenesis while living. Most people cannot survive without a cerebellum. However, there was an even more fascinating report of a Frenchman who was missing an absolutely enormous part of his brain. This story is almost unbelievable to be honest. It made me think of the Scarecrow from the Wizard of Oz.

French doctors in Marseille published a brief communication titled ‘The brain of a white collar worker’ in the medical journal The Lancet, the focus of which was the brain scan of a relatively normal French civil servant. The man, married with two kids, came to doctors presenting some mild weakness in his left leg. He eventually arrived in the neurology department where it was found that most of his brain wasn’t there. He literally had a tiny brain. The doctors found that this man had a below average IQ, at 75 (the average is 100) and while this means he has a below average intelligence, it doesn’t put him into the category of mentally retarded.

So while these cases are rarities, people usually don’t survive with such strong brain defects, there are many cases of surgical removal of parts of the brain which are just as interesting.

One of the most famous stories in the world of neuroscience is that of Henry Gustav Molaison (February 26, 1926 – December 2, 2008). Henry who was known in the scientific world by only his initials, Patient H.M., developed severe epilepsy following a bicycle accident at the age of 7 and was later referred to the neurosurgeon William Beecher Scoville who localised the epilepsy to the left and right temporal lobes of the brain. It was decided that removal of the parts of his brain responsible for generating these epileptic seizures would be the best treatment. And so in 1953, at the age of 27, Henry Molaison underwent experimental brain surgery to remove these pieces of brain tissue.

The surgery went according to plan with Dr. Scoville removing the majority of the hippocampus and the amydala. At the time, not much was known about the brain and doctors could not anticipate the consequences of removing these brain structures. After recovering from surgery, which was successful in reducing epileptic seizures (although he did remain on anti-epileptic medicine during the rest of his life), it was found that Henry suffered from complete anterograde amnesia. Basically, the part of the brain the doctor removed, the hippocampus, was responsible for forming new memories. This new finding was reported in by Scoville and his colleague Brenda Milner in The Journal of Neurology, Neurosurgery and Psychiatry in 1957.

Although he never knew it (or rather could never remember), H.M. devoted his life to advancing our understanding of the brain. It was really the work of the talented psychologists including Brenda Milner who dedicated the majority of their careers inventing new tests for H.M. to do in order to assess exactly what type of memory was impaired following his brain surgery. It was found that not all types of memory were affected. Although Henry could no longer form explicit memory, i.e. the conscious recollection of information, his implicit memory was still intact, meaning that he could learn unconscious motor tasks. So he still could learn new things, but just couldn’t remember he had done them before. Henry Molaison’s somewhat tragic life makes for a really fascinating story and I would recommend people read a book written by Suzanne Corkin titled ‘Permanent Present Tense’.

So as you can see, it is possible to live without certain parts of your brain, whether you are born that way or have them surgically removed. But every part of your brain serves a different function. Radically losing a part of the brain tends to have dramatic effects on your life. However, if you are born with certain abnormalities, these rare cases go to show that the brain can remodel itself with other parts of the brain likely taking up the slack. I’m not saying you’ll be completely normal but if the loss isn’t too dramatic you may be able to survive.

Anorexia and I Shake Hands | poetry

A Walk Among The Tombstones | review