Long before Prof. Brian Cox and his lovely locks graced our television screens, scientists have been entertaining and educating the public through science popularisation. Notable is Carl Sagan who inspired an entire generation with Cosmos, a cinematic celebration of the universe and our place within its vastness. Hell, he wrote Contact, which was made into a film with plenty of sci-fi silliness but these kinds of films inspire a thirst for knowledge and ask the big question: are we alone out there?

Unfortunately, the job of science populariser or communicator has been a mixed bag for career scientists. Communicating science is fuelled by a passion to bring science to everyone but it is up against that adage: “those who can, do; those who can’t, teach”.

And then there is the famous ‘Sagan Effect’. Carl Sagan, although an active researcher in the field of astronomy, was denied membership in the prestigious US National Academy of Sciences within his lifetime. His peers looked down their noses at a career that included entertaining and educating the public while cultivating a love of science and curiosity around the workings of our universes. Every minute in the limelight was seen as a minute robbed from lab or field work or writing a journal article; Sagan’s peers felt that his work with the public diminished his contribution to the scientific establishment.

In the long run, Sagan inspired an entire generation of scientists and science enthusiasts. Somewhere, something incredible is waiting to be known, he said. The Sagan Effect, however, has not gone away. A 2006 survey from the Royal Society suggested that public engagement is carried out by “those [scientists] who are not good enough for an academic career”.

This has not stopped a flood of enthusiastic scientists heading to social media to engage with the public on all matters science. In fact, the prestigious journal Nature has a handy guide to social media for scientists, noting that 13% of all scientists/engineers use Twitter on a regular basis.

“If Twitter were a place… it’d be a giant coffee lounge full of science enthusiasts just like you. Used properly, a Twitter network can broaden/change/improve your scientific thinking,” says Nature.

Amongst those wandering about this gigantic virtual coffee lounge is Dr. Matthew Partridge, a research fellow within Engineering Photonics at Cranfield University in the UK and purveyor of humourous science-based comics in the form of ErrantScience. We quizzed Matthew all about his love of science and comedy and how he has managed to combine them and find a loyal online audience.

HeadStuff: So, Matthew, do you define yourself primarily by your job as a postdoctoral researcher in biochemistry or as a science communicator?

Matthew: I think it’s a fair question to start with as I certainly have a complex role. I am a postdoctoral researcher in biochemistry that also draws cartoons and blogs. Most of the time I introduce myself as a researcher as that has been my full-time job for the last decade. I have only started referring to myself as a cartoonist this year and to be perfectly honest it’s mostly because other people started calling me that. Deep down I’m just a scientist that likes to laugh at science.

HS: How did Errant Science come about? Have science, explaining science, and laughing about science always gone hand-in-hand for you?

M: I’ve never been all that serious about anything, so not being serious about science isn’t too much of a stretch. Since watching Monty Python with my dad I have always been really into comedy and have always considered it a good way of making difficult subjects discussable and complex subjects manageable.

So, when I started ErrantScience I never wanted it to be a po-faced, serious discussion of science; there are plenty of sites already doing that. I wanted the sort of light hearted self-deprecating content that I’d like to read.

Comics and Coping with Dyslexia 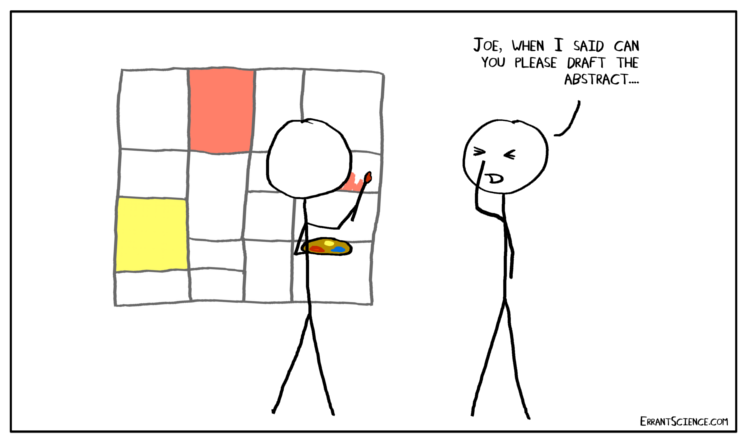 M: It stems from the fact that I am quite badly dyslexic. I have always been dyslexic – to the point where I would often struggle to write much more than 200 or 300 words. From GCSEs to university exams, it has been absolutely horrible. Coursework was slightly better but basically if I had to get what was in my head on to paper it was not going to happen. I did great at discussing things but sadly my exams didn’t take this into account.

Over time I learned to just avoid writing and coping with having terrible grades. But shortly after starting my first job in research I realised that there was no getting away from it. Writing is a huge fundamental part of research and something I needed to cope with. So, for no other reason that it seemed like a good idea I started a blog and began writing 1000 words a day.

The blog was terrible and I have carefully removed it from the internet! But writing 1000 words a day for five days a week worked; over the space of about two and a half years my writing went from atrocious to acceptable. I changed jobs and my time for blogging disappeared so I stopped but the skills I learned were then applied to scientific writing and my career.

Skip forward another five years and a handful of people that remembered my original blog had persistently been prodding me to start a new one. At the same time, there was internal pressure from our department to have more of a public profile so I offered to run the department blog, which is called Open Optics. It is still running – handled by someone else now – and was my tentative step back into academic blogging.

After setting it up and running it for about 6months I handed Open Optics over to another academic to run but I was hooked again and couldn’t give up writing amusing science stories. So, on the 27th of March 2013 Errant Science was launched.

HS: What is your favourite thing about doing Errant Science?

M: People enjoying it. Nothing makes me feel better than people sharing my content, telling me how much they enjoyed it, or pinning my cartoons to their lab walls. Every retweet, comment, like or share I see (and I see them all because I am stats obsessed!) is what keeps me doing it.

HS: What kind of an online audience do you have? Do you reckon it’s mostly other academics glad to have a laugh and distraction from tearing their hair out over funding applications/annoying students/getting published… or it is also a chance to introduce to the public the ins and outs of life as a scientist?

M: My audience is variable. Errant Science produces a lot of content. Every month there are six blog posts and around ten cartoons. These tend to reach a different audience depending on the content.

ErrantScience has a core set of readers that come back every week and read the content these core readers are as far as I can tell predominately people ‘in’ research. They vary from students still at school to professors but broadly speaking they are all ‘scientists’. This core audience grows consistently over time but is only around 10% of the readers of ErrantScience.

The rest comes from social sharing of the content via Facebook and Twitter. In these cases, the people sharing tend to determine the eventual audience. Some articles get picked up by schools, others by universities, and others by magazine or even newspapers. For the most part, I can guess which posts are likely to end up with which audience; infographics about chocolate are going to end up shared a LOT on Facebook.

Personally, I aim to give anyone interested in science and research an insight they can’t get elsewhere. Some articles are a little more tailored to the in-crowd but overall the target is anyone that wants to know more. One thing I’m very strict on is always making the articles accessible to anyone with a GSCE science knowledge.

Has Twitter set Scientists Free from the Sagan Effect? 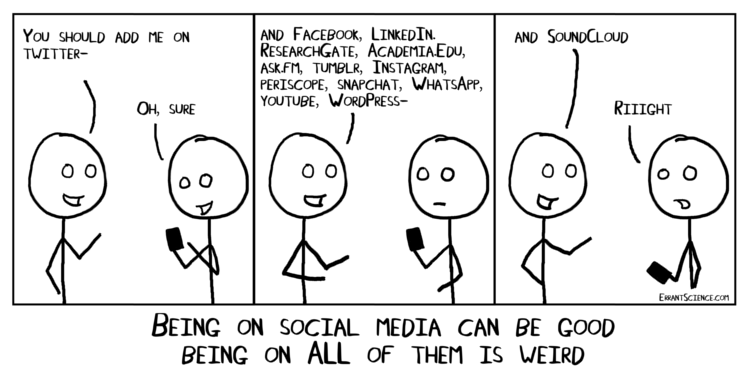 HS: Do you think it’s pretty easy now to be a blogging, vlogging or tweeting scientist – or does the Sagan Effect still linger? Is outreach still a dirty word for the career scientist or are your peers, as you see it, pretty media savvy?

M: It depends where you work and who you work for. However, in my experience and the experience of many people I know in the science communication community, science popularisation is still frowned up on and the Sagan Effect is alive and well.

It is getting better but I have been in meetings that have tried to quantify the amount of money we have earned from science communication activities alongside looking at the value of collaborations and impact that have arisen from these activities, only to have other academics continue to insist that I am wasting my time.

For example, the person behind one of the most influential science communication accounts on Twitter has been frequently attacked for doing what they do despite the fact that their Twitter account is a large part of their research and has directly lead to publishing academic papers.

The reasons why the Sagan Effect still exists are complicated and not something I can go it to details about here. But one thing I would say is that it is not a generational difference; plenty of young academics are as cynical and dismissive of science communication as the older generation.

The Cabaret of Dangerous Ideas

HS: You took part this year in the Cabaret of Dangerous Ideas at Edinburgh Fringe. What was that like in terms of the reach and type of audience you were in front of? Do you think there is a growing appetite for this kind of crossover of entertainment, public talks, curiosity and humour?

M: The Cabaret of Dangerous Ideas was part of a number of events I’ve done this year under a banner of what I’d call “ErrantScience Live”. As events go it was small but the audience was fantastic: a real mix of scientists and non-scientists. The show was based heavily around audience participation and the audience asking questions so having a diverse mix really helped open up the range of topics I could cover.

In recent years, I think the appetite is about the same for this kind of content. People really love good quality science content and enjoy more informal or fun formats. Making it fun or funny, I think, means that from an audience member’s point of view if the science isn’t interesting at least there will be some jokes.

At the Fringe some people I flyered were really excited to hear that there was something more educational while also entertaining. But on the flip side there were also a few people that sneered the moment I mentioned the word “science”. One memorably said: “Entertaining science? Yeah, science is never entertaining”.

That said, I hope blogs and talks in the style of ErrantScience contribute to breaking down that barrier and opening people up to the more relaxed, fun side of science.

Comics by Matthew Partridge for ErrantScience

Marie is Science Editor at HeadStuff. She is an IRC-funded PhD candidate researching online science journalism and reader comments. She is also an award-winning technology journalist with a fondness for writing about AI. She failed the reverse Turing test because she is a real human, honest, and not a robot. Beep boop.

More Than a General Forecast | What Is Your Mental Health RealFeel?