As some of you may have heard, this year’s Nobel Prizes have been awarded to many great and deserving people. This highly prestigious award, started by the dynamite tycoon Alfred Nobel in 1895 (following his death), comes only after having contributed some brilliant work in your field, be it Literature, Peace, Physics, Chemistry or even Physiology & Medicine. I was compelled to write a piece about this as both the chemistry and the Physiology & Medicine prizes are quite close to home. I worked on a part of the brain that was awarded the prize in Physiology & Medicine and have a great number of friends who use the type of microscope which was awarded the prize in chemistry. If you are wondering how and when you are most likely to win a Nobel Prize, you can take a read of an earlier piece I wrote on the subject.

In this post I would like to highlight and try to explain the brilliant work carried out by a small group of scientists which literally changed the way we look at the world. I am indeed talking about the Nobel Prize in chemistry which was awarded equally to two physicists and a chemist; Stefan Hell, Eric Betzig and William Moerner. This prize was awarded specifically for the development of superesolved fluorescence microscopy. In short, these guys invented new ways of looking at very small things under the microscope in such detail that was believed to be impossible to achieve. Sounds pretty impressive, eh? 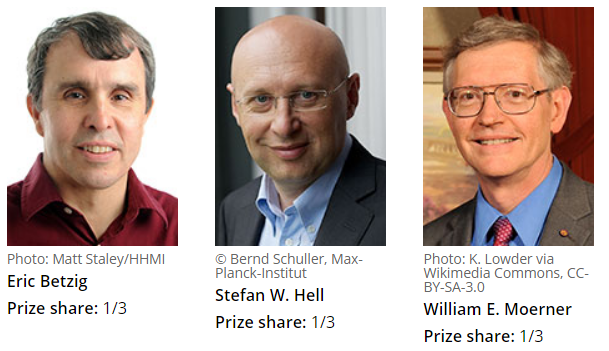 This story begins with a quick history lesson in physics. In 1873, the optical scientist Ernst Abbe (1840-1905) published an equation known as Abbe’s diffraction limit, which states that the resolution of a microscope is strictly limited by the wavelength of light. In practice this meant that no matter how powerful the microscope, we would never be able reach a resolution below 0.2 micrometers (0.00002 centimeters).

Most people might be content with this level of detail, but Stefan Hell was not. Hell set out to find a way around this limit in order to see the smallest structures in the finest detail. Hell did not break or disprove Ernst Abbe’s equation but rather worked around Abbe’s limit in an ingenious manner. Normal fluorescence microscopy involves tagging the structure of interest, say the nucleus of the cell where DNA is stored, with a fluorescent molecule then you must excite this fluorescent tag which in turn, emits light. In this way, scientists are able to specifically tag a structure of interest and collect the light coming from this structure. This can give us many details about the size and shape as well as other dynamic information such as how this structure might move around the cell itself.

Before Stefan Hell came along, fluorescence microscopy was limited to bigger structures, and even if you did try to tag smaller structures, you would probably overestimate their size due to the resolution of your microscope, set by Abbe’s diffraction limit.

Stefan Hell won his 1/3 of the Nobel Prize for developing a technique which cleverly overcame the diffraction limit by exciting fluorescent molecules using a laser trained to a small centre spot while simultaneously using a doughnut shaped laser to extinguish light around this central point. Hell was able to make the hole in the doughnut extremely small (less than 0.2 micrometers) allowing him to image super-small, nanoscopic, structures of the cell. This he coined stimulated emission depletion (STED) microscopy which he published in Proceedings of the National Academy of Sciences of the USA in 2000, introducing the STED technique to the scientific world.

Next, we come to the story of the other two shared winners of the Nobel Prize in Chemistry, Eric Betzig and Willam Moerner.

William Moerner is a chemist who made a name for himself working with fluorescent particles. During his career he made a breakthrough discovery that one variant of the Green Fluorescent Protein (GFP), which was originally discovered in the jellyfish Aequorea victoria and would (a decade later) lead to a Nobel Prize for its discovery by Roger Tsein, could be controlled by light to turn on and off. This he published in the journal Nature in 1997. As with most scientific discoveries, it takes a brilliant mind to fully conceive the importance of such a finding.

Eric Betzig turned out to be one of the brilliant people to put Moerner’s controllable fluorescent particles to work in a novel way which would allow him to join the elite club of Nobel Prize winners. Building on Moerner’s findings, Betzig published a paper demonstrating a method to circumvent Abbe’s diffraction limit, using low amounts of light in order to excite only a fraction of the fluorescent molecules which tag the structure of interest. This allowed the precise calculation of the position of each individual fluorescent particle before the light died out. This process was repeated over and over allowing the reconstruction of a superesolution image of the structure being studied. Betzig and his colleagues published this technique called photoactivated localisation (PALM) microscopy in Science in 2006 and brought this technique to the attention of the scientific community at large.

In scientific terms, these techniques are relatively new. Nevertheless, the speed by which these techniques have been taken up and used by countless laboratories for a wide range of scientific questions highlights the importance of superesolution microscopy in modern science.

Personally, I know many people using these techniques to study the brain. Superesolution microscopy has now advanced to the stage where scientists can now image living tissue and see movements of proteins and other small structures in real time. These advancements really have changed the way we see the world around us, and have been used to see a whole new level detail that was invisible before the invention of these techniques.

I’m delighted that superesolution microscopy has been awarded a Nobel Prize as it most definitely deserves it. The only thing that slightly confuses me is the fact that STED got lumped in with chemistry when you could argue that it falls into the physics category. But still, I bet Stefan Hell isnt complaining!

You can find out a whole lot more about the Laureates of this year’s Nobel Prize in Chemistry as well as the principles behind their achievements on the Nobel Prize website.

Online Dating and the Death of Romance