A new study published this month in Nature Neuroscience has shown that caffeine can improve your memory. We have all already heard stories of coffee improving your concentration and focus, however the difference with this study is that subjects took the caffeine after learning, which improved their performance in a memory task 24 hours later. This means that the caffeine was not involved in the actual learning of the task, learning was done before taking the caffeine pill, but caffeine is rather involved in the process of storing the memories. This is known as memory consolidation.

What’s great about this study is that it was carried out on human subjects, so this really works in YOUR brain. When working with humans the experimenters need to be extra stringent, particularly with drug experiments. This is exactly what the authors have done, this study is a double-blind placebo-controlled study. 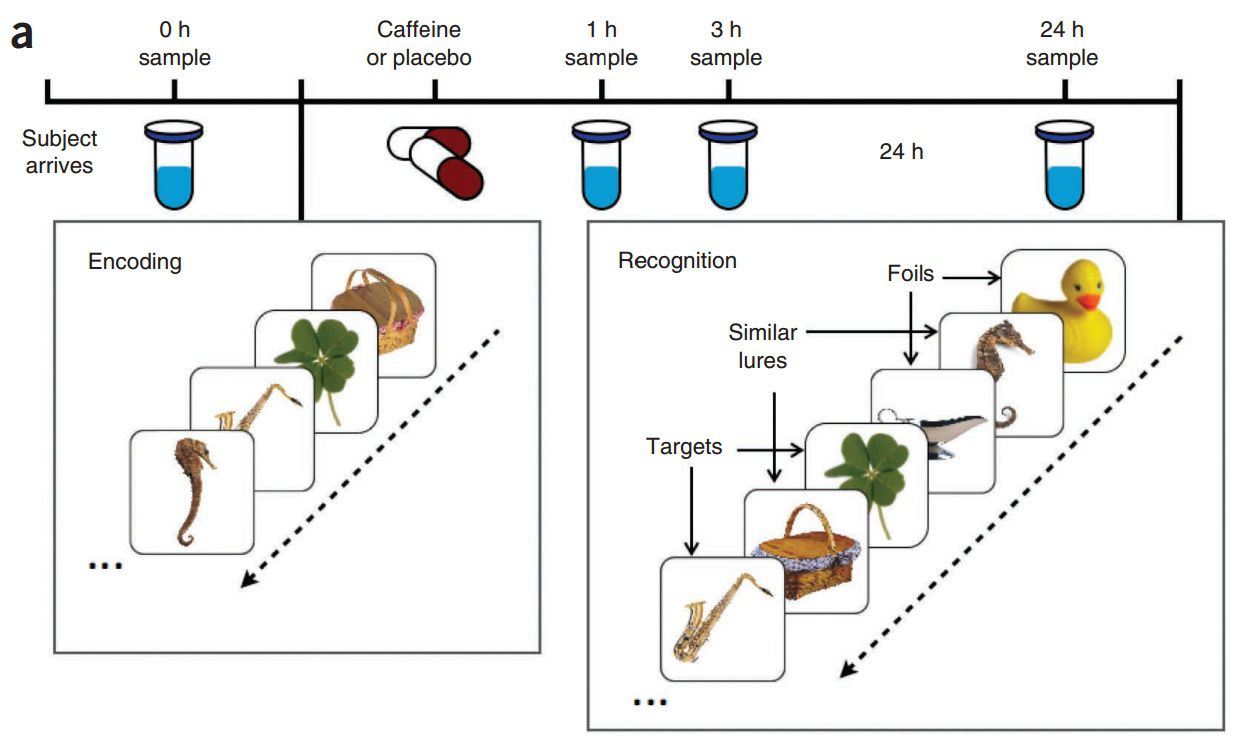 So how did they show that caffeine improves your memory? The methods are in the figure above, which is a timeline going from left to right. The experiment begins when the subject arrives and a saliva sample is taken, to make sure they have no caffeine in their system. Then the subject has to look at some pictures and try to memorise them, this is the learning phase. Following this, the subject takes a caffeine or placebo pill and more saliva samples are taken at 1 hour, 3 hours or 24 hours after the learning. Subjects then do a second task which is slightly changed from the first. This time researchers have added some new images, some are completely different and others slightly modified. So in this test subjects have to use their brains to remember if the image is ‘old’, ‘new’ or ‘similar’. This memory test specifically targets a part of the brain called the hippocampus which is vital for episodic memory. Episodic memory concerns several brain areas and is important for remembering autobiographical events, such as who, what, why, where, when and the context related to these events.

What the authors found was that people who had taken a caffeine pill were able to distinguish between ‘old’ and ‘similar’ images better than people who took the placebo. Take a look at the methods figure again. The picnic basket looks the same in both encoding and recognition tests. However, if you look closely you can see that in the recognition part of the test, the basket is slightly different. People who received the caffeine pill noticed this difference and said the image was ‘similar’ while the placebo group more often said it was ‘old’.

The authors also investigated the effect of concentration on memory. This is where it gets interesting… they found that at low (100mg) and high (300mg) caffeine concentrations the effect on memory wasn’t so great. However, at 200mg, the medium concentration, the effect was the greatest on memory consolidation. 200mg of caffeine is the equivalent of about 2 cups of coffee which is the average daily consumption of the majority of people. At the higher concentration used in the study, there was a big increase in the number of people who got headaches and the jitters, which probably didn’t help with remembering what they had learned just before.

So this is all great news, coffee can boost our memory but only if you get the right dose. Maybe we should consider finishing a late night study session with a nice caffeine pill… or not. I think that this study is just a beginning of a story that is likely to be quite interesting. What is the precise mechanism behind this effect of caffeine on memory? If we can find this out, maybe we could apply this knowledge to help treat people with intellectual disorders as well as perhaps delay the effects of memory dysfunction in people with diseases such as Alzheimer’s disease.

‘A Kick Against the Pricks: The Autobiography’ by David Norris.