It was just another cold, dark Friday night in Calgary. However, rather than spending my evening as I usually would, probably going for a few drinks with friends and getting far away from science, I volunteered to help out at a science night at the Calgary public library. On this night, hosted by the science communicator Jay Ingram, researchers from the Hotchkiss Brain Institute were invited to talk about the latest developments in neuroscience. It was a fantastic event, bringing researchers and the public together, which in my opinion doesn’t happen enough! The topic of the night was brain-machine interfaces and it was made clear that these are now a thing of reality and are becoming quite common. It is estimated that these devices have already had tremendous effects on the lives of hundreds of thousands of people worldwide.

The night kicked off with a talk by Dr. Zelma Kiss from University of Calgary who spoke about her work on deep brain stimulation and it was definitely the most popular talk of the evening because this ‘brain-machine technology’ is already being used in patients. Interestingly, even though this procedure is becoming common place, we don’t know a lot about how exactly it works!

So what is deep brain stimulation and why would you want it?

Deep Brain Stimulation (DBS) is a rather straight forward technique involving the implantation of electrodes into the brain, where electrical impulses function to stimulate specific brain areas known to be involved in the particular disease being treated. This procedure was first carried out in patients with Parkinson’s disease, which affects motor control and is characterized by tremors and slow, sluggish movements. In 1987, Dr. Alim-Louis Benabid carried out the experimental surgery on several patients suffering from untreatable Parkinson’s (where all drugs had failed) and inserted electrodes into these people’s brains in order to stimulate groups of neurons that are known to be affected by Parkinson’s disease. Once the surgery was complete, Dr. Benabid had to then find the right way to stimulate these people’s brains to treat and reduce tremors. He discovered that stimulating at high frequencies (100Hz = 100 times per second) did the trick and the tremors completely disappeared while the patients’ brains were being stimulated. The fact that this worked was quite interesting to begin with, and what proved even more interesting was the use of these high, non-physiological, frequencies of stimulation. Although neurons in the brain do fire electrical impulses, they do not fire at 100Hz. So how is this working?

It is believed that this high frequency of stimulation effectively short-circuits the brain pathways causing the abnormal motor movements, i.e. tremors, as I mentioned earlier however, the exact reason why this works remains a mystery. DBS works when drugs fail so there are obvious advantages to this treatment. Even when drugs are still effective in patients, one major advantage of this procedure over drug-therapy is that DBS targets specific brain areas whereas it is impossible to be so selective with drugs, which act on the whole brain and body potentially leading to unwanted side effects. 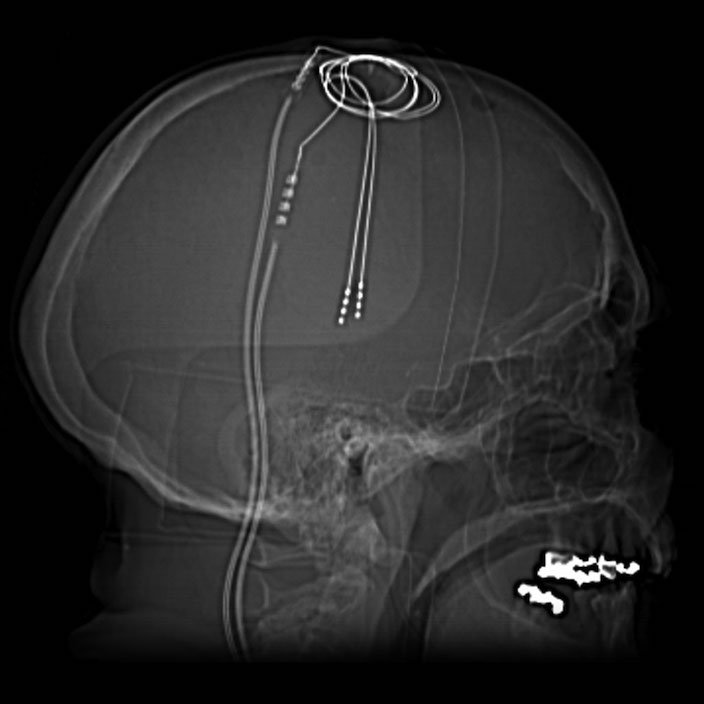 Nevertheless, since the early discovery by Benabid and his colleagues, not a lot has changed in the way this procedure is implemented and it is estimated that well over 100,000 people worldwide are now living with brain stimulation devices implanted in their bodies. The implantation involves a brain surgery where the patient remains awake, only receiving local anaesthetic to numb the skull. The brain itself contains no pain receptors, therefore it is possible to carry out the surgery on an conscious person which is ideal to ensure the electrodes are placed in the right spot. Everybody’s brains are slightly different so there is some trial and error even at the surgical stage, this is another reason why it is better for the patient to stay awake. As the doctors implant the electrodes into the brain, they can turn them on and if the tremors/symptoms subside, then they know the electrodes are in the right spot. These electrodes, once implanted in the brain, are hooked up to an impulse generator (brain pacemaker) which is normally implanted in the chest. Here doctors and patients can use a device to communicate with the stimulator in order to change the intensity and the frequency of stimulation, as necessary, to try and get the best results. Interestingly, it is not as simple as turning the stimulator on and all the symptoms disappear, in some people, yes this works instantly, but in others it may take weeks or months for any effect.

If you have a few minutes, it is really worthwhile taking a look at this video, showing how effective DBS can be in a man with Parkinson’s disease. After two minutes the guy in the video turns off his brain stimulator and his typical Parkinson’s symptoms return instantly.

If we now fast-forward to the present day, DBS has really kicked off and has been used to treat a wide range of different brain diseases, where classical treatments have proven ineffective, including; major depression, obsessive compulsive disorder, Tourette’s Syndrome and chronic pain. So as you can see this one technique has the potential to be a real game-changer in terms of how we deal with diseases of the brain. DBS has become so mainstream, that doctors have even broadcast surgeries across social media with a particularly famous case being the surgery on Brad Carter, a musician who underwent DBS surgery to calm tremors which stopped him from playing guitar. Pictures and videos of the progress of his surgery were posted online and you can see a lot of the action on the UCLAHealth Vine.

The second talk of the evening was given by Dr. Grant Gordon. He spoke about optogenetics, which is the latest technique that has been widely adopted in so many basic research laboratories. Optogenetics involves shining light onto neurons in order to to silence them or make them fire and was developed in Karl Deisseroth’s lab at Stanford University. The technique sounds rather straightforward, shine light on neurons to start/stop them firing, but first light-sensitive proteins have to be delivered into the cells you want to stimulate. This is done by high-jacking a virus, inserting the DNA of the light-sensitive protein (one of the most common is a light-sensitive ion channel taken from algae) inside the stripped-down virus, and injecting it into the brain region you want to study. Once the DNA is delivered by the virus, the neurons express the protein and you can activate or silence these neurons depending on the protein that you have delivered and also the colour of light you shine on the cells. The effects of optogenetic stimulation of certain neuronal populations can be very robust as you will see in the video below in the worm. That’s just one example of many you can find online.

So it’s clear that both DBS and optogenetics basically do the same thing. They are both capable of stimulating and silencing neurons. At the moment, DBS is far more straight-forward compared to optogenetics. There are advantages to both however. The beauty of optogenetics compared to DBS is that it is far more specific. By using specific ‘promotors’ or tags in front of the DNA we inject into the brain, we can target specific neurons. DBS on the other hand stimulates all neurons in the surrounding area. The hold-up is that optogenetics has not moved beyond animal research yet so it has not been tested on humans. This is understandable as in order for it to work you have to deliver foreign proteins into the brain, which would actually result in a sort of hybrid human species. The process of injecting a virus containing foreign DNA into the brain of patients and stimulating their brains with fibre optic cables, seems quite far away but who knows. Perhaps DBS will eventually give way to optogenetic therapy or maybe it will simply borrow ideas from optogenetics and become more specific in terms of the neurons which are stimulated.

Like the cyborg Neil Harbison, interviewed by Headstuff Science last month, who had an electrode implanted into his brain in order to ‘hear’ colour, brain-machine interfaces are becoming a reality and as we understand more about how they work, these devices are likely to become more common and potentially help millions of people.

Has Hollywood Given up on Drama? – A Review of Black Mass