At first I thought I would make some kind of infograph comparing and contrasting fact and fiction but this posed two problems. Firstly, I’m not an artist, and I’m especially not a digital artist; even if I did figure out how to make an infograph it would be revolting. It would be such an insult to the eyes that even if you did manage to decipher it you really wouldn’t thank me for it. The second problem is that autism is not as simple as black and white, fact and fiction, yes and no. It is intricate and complex and utterly individual.

So, instead, I’ll stick with words and give you an overview of the facts about autism.

In 1998, an article was published in The Lancet (a highly regarded medical journal) by Dr. Andrew Wakefield that investigated the link between bowel disorders and regressive development (the halt of typical childhood development and return to immature behaviours and characteristics). Dr. Wakefield based the study on 12 children. He used the anecdotal i.e. unscientific, evidence of parents of 8 of the children to imply that the MMR vaccine may trigger ASD. To cut a long story short, the media caught wind of this statement and spread worldwide panic like wildfire. As a result, confidence in the MMR vaccine fell and children were no longer being immunised. In the UK that year, for the first time since 1992, a child died from a case of measles. In 2000, three children in Ireland died in a measles epidemic that occurred as a direct result of decreased immunisation. In 2004, an investigative journalist, Brian Deer, discovered that the information presented in Wakefield’s publication had been manipulated and distorted. Below is a summary of what was discovered: 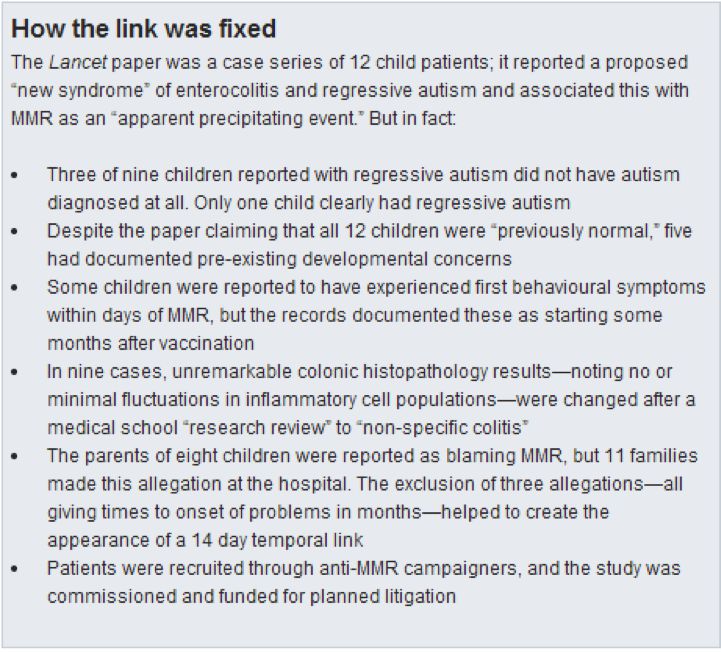 Putting it in perspective, to satisfactorily make generalisations about the wider population it is necessary to study a cohort of at least 30 people. Then that study must be successfully replicated by independent researchers. It took years of investigations, hearings, and unsuccessful attempts to independently replicate Wakefield’s research before, in 2010, the General Medical Council was able to conclusively disregard the findings, and revoke Wakefield’s medical license, and The Lancet retracted the published article.

What’s really scary is that this unfounded rumour, based on merely 8 children, ingrained itself so steadfastly that now the terms MMR and autism appear to go hand in hand. To this day parents are hesitant to give their children the MMR vaccine. However, what some people fail to see is that the MMR vaccine prevents death, brain damage, and severe learning disabilities. It’s as simple as that. It is proven to protect children from the highly contagious measles, mumps and rubella. It also indirectly protects those with weakened immune systems who take a risk everyday just going outside –it’s a social responsibility.

With that in mind I happened across a great website ( http://www.the-art-of-autism.com ) that showcases the talents of people with ASD.  One of the characteristics that people with ASD often show is that they can be very logical. This can stand in their favour a lot of the time as it can be used to analyse a confusing social situation. However, ironically, it can sometimes confuse situations, say for example, when a joke is being told. Jokes tend not to be logical – that’s the joke. So the geek in me was delighted when I found this abstract piece by Mitch Christian. It’s called ‘The Three Amoebas’. I hope you like it too. 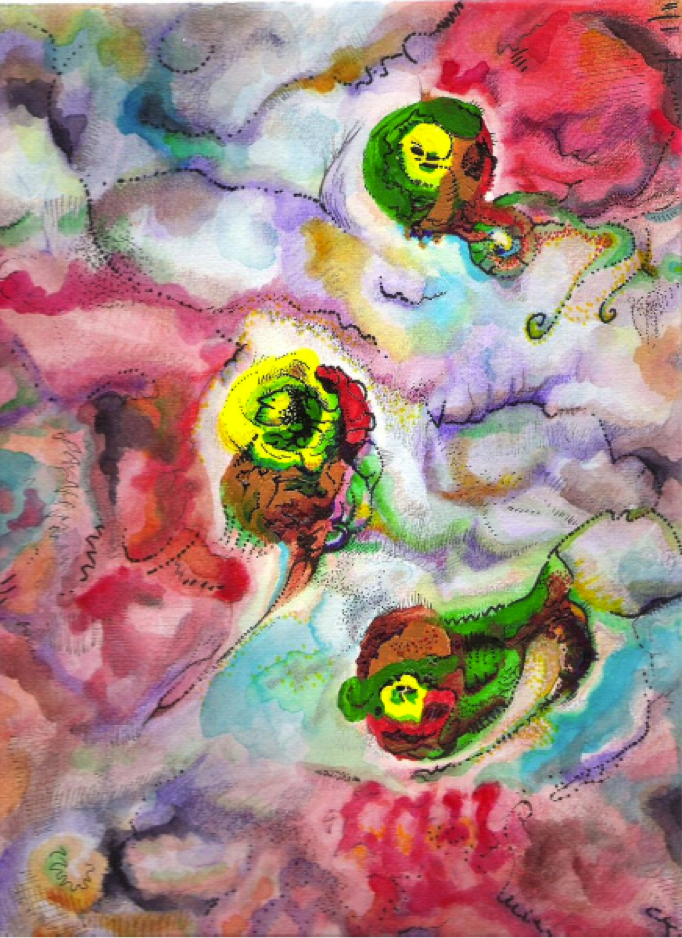 Please be aware that this article is meant as a basic overview.

To find out more about Autism Spectrum Disorder please follow these links:

For educated information about the MMR controversy, please follow these links:

Aoife Buckley is a Speech and Language Therapist who loves words in all their forms: foreign languages, psycho/linguistics, phonetics, writing words. Ironically, shes not much of a talker.
Her goal for 2014 is to help bring speech and language therapy into the mainstream (and hopefully get a job while shes at it).

Her twitter is @aoifetalksSALT and it would really make her day if you visited her new website: www.aoifetalksspeech.com