When the exit polls were released for the referendum on the Eighth Amendment, I was speechless. Never in my wildest dreams, had I considered such a strong Yes vote. On May 25th I would say I was cautiously optimistic, but even that hesitant hope was filled me with fear. I shed tears in the polling booth, feeling so afraid of what the result would be. I couldn’t face the thought of the No vote, I was sure that if the referendum passed it would be very, very close. Despite the positive responses from canvasses and on the streets, despite the positive indications of previous posts, the media coverage and my own worries had me fearful that it wouldn’t pass. I couldn’t believe my eyes after reading the Irish Times exit poll of a 68% victory for yes. Myself and my housemate were shaking, I was crying as he congratulated me. But I couldn’t believe it. I kept shaking my head and saying no, not until the announcement.

We tuned into the Late Late Show waiting for the RTE exit polls to be released. The connection was patchy and kept freezing, people all over the country were using the RTE Player, waiting impatiently to hear the numbers. And it was even higher, 69%. More hugs. More tears. But Ryan Tubridy’s declaration that ‘it has been a very civilised campaign’ made me scoff. What referendum was he watching? I remembered the man on my first day of handing out Together for Yes leaflets. He towered over me, backing me across the path and shouting at me. He called me a murderer, and his aggression left me completely rattled, wiping spittle off my forehead. I remembered all the names I’d been called on the streets, the looks of disgust, and the times my arm had been grabbed. And I would consider myself one of the lucky ones, I know people who took far worse abuse on the streets. I was determined throughout to rise above it, to remain calm and to represent the Yes side as best I could. There was never a time when going out to campaign didn’t scare me, but it was too important not to take action. Even if I was just helping with the visibility of the campaign, or reminding people to get out and vote it was still worth it. I’m no natural campaigner, if anything I’m the opposite. I am naturally quite shy and introverted, and I struggle with social anxiety. To speak to strangers or look them in the eye terrifies me.  Anxiety aside, it is not easy to have those conversations, particularly about such a sensitive topic, or to have to ask people to vote for your right to bodily autonomy. 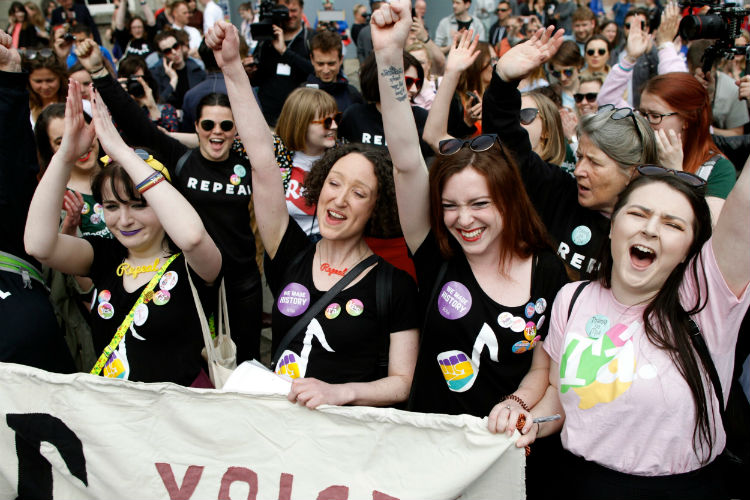 I don’t know if I’ve ever been as exhausted as I was in that last week of the campaign. Legs sore from being on my feet, arms aching from holding up signs at a Beep4Yes event, deprived of sleep from anxiety and bad dreams. Even now, I am still recovering from the emotion and effort of it all. On Friday and Saturday Sarah Maria Griffin’s ‘We Face This Land’ reverberated in my head, ‘Witches or women – these are our bodies which shall not be given up’. Seeing men and women wearing Repeal jumpers reminded me of the striking visuals accompanying that poem in Dave Tynan’s video piece. On my last long day of campaigning, seeing hordes of those jumpers gave me a similarly strong feeling, this time of solidarity. Seeing ‘Yes’ and ‘Tá’ badges, the thumbs up and smiles made me think that maybe things would be okay.

Walking into work on Saturday, the day of the results, I encountered one of the team leaders from the Dublin Central leafleting sessions. We hugged, she showed me a photograph of the first tally and I began to cry for the third time that day. I spent the morning at work blinking back tears and shaking. It was too busy for me to check updates until my lunch break, by which point the No side had conceded defeat, and the counts were rolling in from various constituencies. It all felt quite surreal, hugging other people in work and feeling an overwhelming sense of relief and support. Ireland had us. Later that afternoon, I watched the announcement of the official results. Wandering through the courtyard, seeing my storm of feelings mirrored in the other faces there. The mood felt celebratory – celebrating the end of a tough campaign, the payoff of hard effort, the feeling that Ireland was a safer place to be a woman in now. I mainly felt relief, like a weight had been lifted off me. 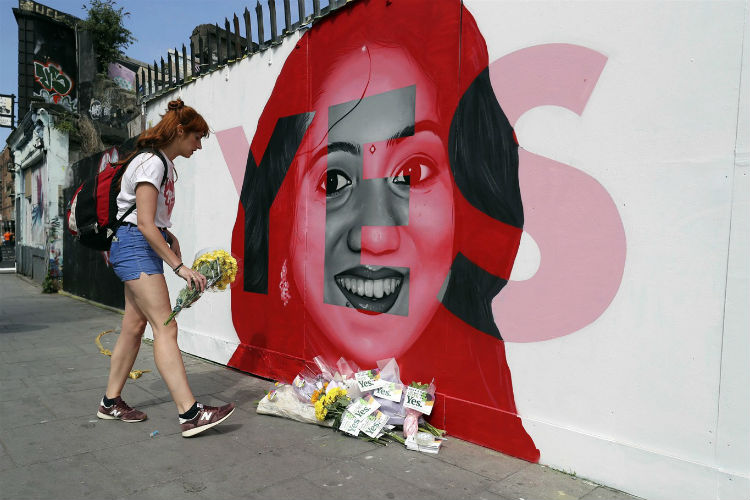 The campaign was described by Taoiseach Leo Varadker as a ‘quiet revolution’, but that’s not what it felt like to me. The chanting crowds on marches, the groups of campaigners out on the streets, the sea of Yes badges and Repeal jumpers. It wasn’t quiet. It was noisy and visible, obstreperous even. There have been so many brave people sharing their stories, so many events, so many passionate advocates. Wonderful groups like the Angels4Yes who have blocked graphic imagery, and have just generally been an uplifting sight. It has been a long road, people have been fighting for this for years, even in my own memory, never mind since the last referendum in 1983. Together for Yes formed a strong unified group, representing a broad range of grassroots movements that have pushed for abortion rights over the years. Seeing their thank you message in the Irish Times was a very moving moment. And the name is so apt – that sense of togetherness was something I really took away from the campaign. Throughout it I felt that the other campaigners had my back, and we all stepped in to help and support each other.

Since the campaign, there’s been a sense of exhaustion among campaigners. Everyone I’ve spoken to feels drained by it, and burnt out. Yet, there is also a consciousness that the referendum was not an end point. The importance of making the legislation trans-inclusionary for example, to ensure that all people with crisis pregnancies will be protected. Making provisions for exclusion zones and remembering the importance of the first term in ‘Free, Safe, Legal’ with the revelation that abortions here will cost about €300, meaning they would still be inaccessible to many people. And, of course, there is still work to be done for abortion rights in Northern Ireland. The posters may be gone, and it has felt strange not to be handing out leaflets before work, but this by no means over yet.

Roe McDermott’s opinion piece ‘I’m a pro-choice woman but I don’t feel joy after the referendum’ has been very helpful to me since the vote, as has talking to friends and other campaigners on Twitter about their experiences. The relief has been mixed with awareness of all the suffering people have been through for us to reach this point, all the work that’s yet to be done, the emotional toll the campaign has taken.  The responses to the mural of Savita Halappanavar alone show this. As McDermott writes, ‘Real change won’t come from powering forward in self-congratulation, but by looking back in order to truly understand, to truly reform.’

Jenny Duffy is a tour guide, reviewer and writer based in Dublin. She can often be found dancing, crafting or wandering around art galleries. She tweets at @Jenny_books_art and her blog is https://thebookstheartandme.wordpress.com

#21 | Birthday Party: Insect Cake, Drop Everything & A Year In Review