Pro-Choice Campaigners Need All The Help They Can Get

In June, it was reported that a woman in Northern Ireland had been arrested for supplying her daughter with abortion pills. A few weeks later (last Wednesday evening, to be exact), Re(al) Productive Health and the Worker’s Solidarity Movement organised a protest calling for the charges against this woman to be dropped, or to prosecute the other 200 or so women who have recently admitted to using or procuring pregnancy termination pills themselves. However, while the events of the protest confirmed that the solidarity among pro-choice campaigners is incomparable, it also proved that they need every bit of help they can get. 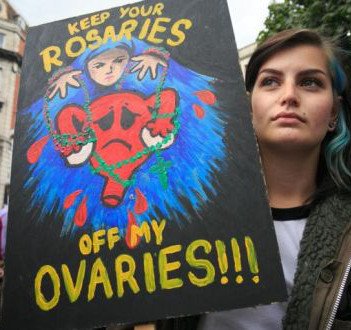 I have to be honest; when I first started reading article after article about how pro-life campaigners felt they were being bullied, censored and ignored by Irish media, it annoyed me. Partly, because I was forcing myself to read about the supposed plight of these people and their distorted ideas about human rights. But mainly, because it was clear they weren’t being ignored at all. They didn’t have to fight for a voice – they were being offered one. Eventually, I began to see these (very) well documented anxieties surrounding so-called censorship for what they really were – an accurate and undeniable representation of every single irony that the pro-life campaign has been built on. However, it would seem that the opposition to pro-choice campaigners doesn’t belong exclusively to pro-life groups.

I went to last Wednesday’s protest to show my support. I also went with the intention of writing an article based purely on the strength and solidarity exhibited by those in attendance, as they came together to demand that police in Northern Ireland #DropTheCharges. To be honest, I still could. I could write an article all about how members of ROSA (for Reproductive rights, against Oppression, Sexism & Austerity) and the ARC (Abortion Rights Campaign), gave impassioned speeches proving their support for women all over Ireland. I could fill a couple of paragraphs describing the posters that people held, as they chanted in unison – “My body, my choice.” I could pretend that the protest was such a massive success, that the charges against the woman have been dropped. I could act as if a group of activists weren’t violently detained by Gardaí on Henry Street for attempting to drop a banner off the GPO. I could say that the pro-choice campaign are getting every single bit of support they so rightly deserve. Their dedication is incomparable. Their rationale is undeniable. But it’s becoming more and more clear that pro-lifers aren’t the only ones opposing the fight for choice.

Pro-life groups seem to like claiming that their voices, events, and beliefs are being underrepresented by national media, but if I remember correctly (which I do), last month’s ‘Rally 4 Life’ made it onto RTE’s Six|One, while the Drop the Charges protest has only been covered by online publications. But it’s not just the coverage and support of pro-choice issues that needs a boost – it’s an understanding of this country’s strict abortion laws as a whole. Out of the few people I managed to talk to at #DropTheCharges – before four squad cars and about ten Gardaí arrived to arrest someone for trying to drop a banner – most had been unaware that abortion (unless a woman could prove her life was at immediate risk) was illegal in Northern Ireland. This time last year, I wasn’t even aware of it myself. It doesn’t bode well for women’s rights campaigners that this kind of information isn’t common knowledge. How are these groups supposed to grow when the general public doesn’t even know there’s an issue worth fighting for? How are they supposed to gain the support and recognition they deserve when someone can get pepper sprayed for hanging a banner off a building? 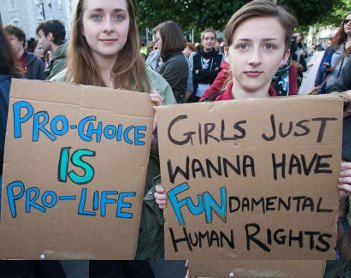 According to Gardaí, the four men were arrested under Public Order Offences; which is ironic considering just how utterly peaceful the protest was up until that moment. In a statement issued by the Worker’s Solidarity Movement, it is suggested that banner drops occur frequently during public demonstrations, and that never before has somebody been arrested for doing so. Perhaps it should be illegal to prosecute a woman based on an outdated law from the nineteenth century. Maybe, instead, it should be an offence to deny women fundamental human rights.

When I asked the ARC about the importance of solidarity within their group, they explained that they weren’t fighting for the rights of a few Irish women, but all Irish women.

Women on Web and Women Help Women (two organisations that distribute the Abortion Pill), are unable to post the Abortion Pill to the Republic of Ireland and ask instead that people supply an address in Northern Ireland. When the abortion pill successfully reaches someone in the South, it is only because someone in the North broke the law there and provided assistance (…) If she (the woman) is prosecuted it will have a chilling effect on those who need to access the abortion pill, and on those who help people access the pill.

The ARC’s response, as well as the protest, proves that the work of pro-choice groups is not only commendable, but courageous too. Such bravery has already ensured the health and safety of thousands of Irish women – but if abortion is ever going to become decriminalised, pro-choice campaigners need all the help they can get. When pro-life groups claim they are being censored it’s easy to refute. Similarly, when pro-choice activists are pinned to the ground and handcuffed, it makes you wonder who is truly being silenced. Regardless, an attempt at systematic oppression does not mean that progression is unattainable, and it definitely does not mean that equality cannot be achieved.