By Aaron Vallely Last updated May 15, 2015
Share
Celebrities like Miley Cyrus, Bruce Jenner and Jaden Smith are becoming role models for LGBT youth by being proud and unapologetic when facing the scrutiny of the public.
“Being who you are,” writes Miley Cyrus, “and who you want to be has nothing to do with gender, sexuality, body type, race, or age.” This line is lifted from an op-ed piece Cyrus recently penned entitled ‘Innovators and Dinosaurs’. One can, if curiosity begets them, read it on a new website for The Happy Hippie Foundation, Cyrus’ new non-profit organization supporting homeless Lesbian, Gay, Bisexual, Transgender, and Questioning youths. 1.6 million youths are made homeless every year in the US, 40% of which identify as being from the LGBTQ aspect of society. These are people who have been discredited, rejected by their loved ones, seen as being tainted and in some 25% of unfortunate cases, abused; physically, sexually, or both. The Happy Hippie Foundation supports strategic programmes that will focus on prevention, immediate needs and awareness around what is happening to so many misunderstood and discredited young people.

“Being a girl isn’t what I hate, its the box that I get put into…

In a recent phone interview with Sandy Cohen of the Associated Press, Cyrus stated that not all her past relationships were “straight, heterosexual” ones. Cyrus is someone who gets it. She gets that a person cannot be confined by their sexual preference, because it is a trivial human act. Our race is generally divided into male and female. Many people enjoy sexual relationships with people of the same sex, many do not, and many respond to both sexes. This diversity is a simple fact of human nature that is entirely natural, for if it was not, it would not occur. Culturally inherited stereotypes, which one learns at a young age, largely is a variety of compositions of over-generalisation, prejudice, and a refusal to acknowledge observable acts of human nature. These stereotypes are largely irrational and can be dangerous.
In another interview, Cyrus declared that she does not identify with any particular gender. “I don’t relate to what people would say defines a girl or a boy,” Cyrus explained, “and I think that’s what I had to understand; being a girl isn’t what I hate, its the box that I get put into. The definition is what I don’t like. The box is what I don’t like. It’s the [stereotype of] weakness, and the vulnerability. I don’t want, in my life ever, some prince dude to come save me. I don’t need to be saved. I’m my own person. I’m strong. As you get older I think I just started to celebrate it, because I learned more about what women really are.” Cyrus also nominated Bruce Jenner as her current idol. 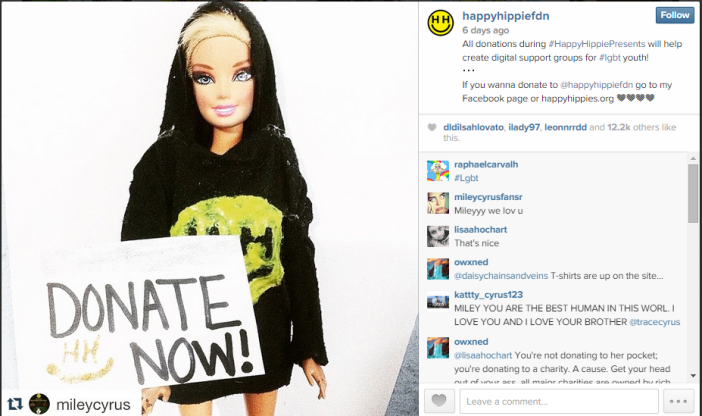 In an interview with Diane Sawyer of ABC news, Bruce Jenner, the famous former Olympian who was at one time coined ‘the greatest athlete in the world’, but who is now better known as the Kardashians’ stepfather, bravely revealed after years of silence that he is, in fact, transgender. (I say ‘he’, because although Jenner described himself as for all intents and purposes a woman, he has not yet specifically requested that he would like to be known by a new name or female pronouns, so, just like Diane Sawyer maintained throughout their interview, I have also elected to use the male pronoun.)

“Cyrus and Jenner are, in ways, products of the celebrity establishment, corporate interests, and public amusement, but they are now claiming something else.

Jenner conducted himself throughout the interview with commendable veracity, and with an unguarded declaration of his own identity. There were no apologies, no pathetic indulgence of pity on himself, and there was a determination to change the perceptions in peoples’ minds. To survive, to have sustenance, after all, one’s own self-evaluation of the world, is the evaluation that must triumph above that of others. Having the luscious advantage of celebrity, he can reach a grand audience that the average, as it were, person, cannot. Cyrus and Jenner are, in ways, products of the celebrity establishment, corporate interests, and public amusement, but they are now claiming something else. They are claiming to take control of their own identity at the potential expense of these estates’ presumed agenda. They have conformed long enough, and now seek to redirect the implementation of their fame for the betterment of themselves and for those of a marginalised portion of society.
It was, of course, John Stuart Mill, whom wrote precisely in ‘The Subjection of Women’ (1869): “Of all difficulties which impede the progress of thought, and the formation of well-grounded opinions on life and social arrangements, the greatest is now the unspeakable ignorance and inattention of mankind in respect to the influences which form human character.” All of us have multiple selves, understandings, aptitudes and desires. The active self, those characteristics from different constituencies of the psyche at any one time, alter momentarily depending upon one’s immediate social environment.

“The self-evaluations, aspirations, and career performances of many devalued people are all enhanced by the increased success and example set from similar role-models.

And language, our communication system, developed over a long process of evolution, is used to attempt to control the complexity of the world by describing it. We have a weakness for categorisation. When language is exposed as being incapable of accurately describing the complexity of the world, we are confronted with instability. Our definitions have failed us, and to admit that is too great a concession for our species and it’s game. We cannot admit it is out of our control. We are the masters of the world, except that we’re not. The natural world has an implicit indifference to our charade of mastery, for it, it dictates the laws of nature.

People like Miley Cyrus, Bruce Jenner, and Jaden Smith – the sixteen year old male actor and rapper whom tweeted that he went to Topshop “to buy some girl clothes, I mean ‘clothes'”, and then wore a dress to school – are doing something significant. The self-evaluations, aspirations, and career performances of many devalued people are all enhanced by the increased success and example set by similar role-models, those who have an identity pressed upon them by cultural stereotypes. The journey continues for these famous strangers, we hope they succeed. They are creating a dialogue that could be a catalyst for cultural change, a new code of ethics, an enemy of stereotypes, and a beacon of hope for so many failed by the mistaken categories of a rich, yet inadequate, language. They are wealthy, famous, brave, and vulnerable. Things we all have the potential for. Life, at best, demands a certain virtue for dealing with oneself. The greatest challenge might be to accept oneself. Miley Cyrus fought her fight in public, and has proven to those who admire her that they can do the same, and with much less public scrutiny.

I am a Writer and Journalist. I champion liberalism, freethinking, and equality. I write mainly on Human Rights Issues, Politics, and Culture.

Lost – What Was the Point of the Most Divisive TV Show in Recent History?

How We Can Better Support LGBTQ Homeless Youth