I celebrated my 26th birthday in style. Surrounded by nurses and doctors giving me drugs and trying to stick suppositories up my arse. Sounds like a regular night in Coppers but thankfully I was in the hospital and everyone was sober. I had just been diagnosed with Crohn’s disease. Happy Birthday! I had been sick for quite some time before I sought out help that I had become somewhat normalised to feeling so sick. The symptoms that I experienced included nausea, extreme abdominal pain, fatigue, weight loss, diarrhoea, oh yeah and occasionally shitting myself. At the time I remember my mam saying ‘now there’s no need to be talking about this kind of thing onstage in your comedy, Andrea’, in reference to my little accidents which were mainly due to not being able to trust a fart. It only happened twice but if respected athletes like Sonia O’Sullivan and Gary Lineker can do it in front of thousands of people and have a laugh about it so can I. 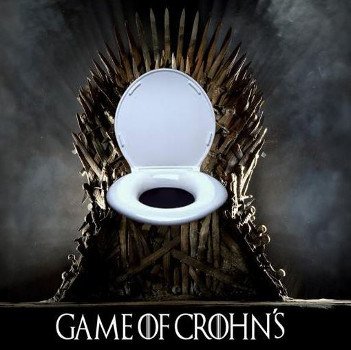 I was embarrassed about it at the time of course because there is such a social taboo in admitting to bowel troubles and shitting yourself. Shitting yourself is HILARIOUS in hindsight, and nobody ever admits that for the first 6 seconds it feels pretty nice. I started cancelling gigs and meetings with friends while I tried find a solution to my problem. I had to give up my job and was housebound, afraid to leave in case I wouldn’t make it to a toilet on time. My GP prescribed me some Xanax and told me it was psychosomatic. I went home to my parents house after I was no longer able to take care of myself because I had grown very weak. They brought me to hospital that night. Mammy knows best.
I would spend the next 4 weeks in hospital. I had to have a colonoscopy and MRI scan before being diagnosed. I woke up during the colonoscopy and saw my insides on the big tv as the doctor guided a camera through my bowels with what looked like a Nintendo 64 joystick. I asked the doctor ‘What’s this film called? Maid in Manhattan or something? Can I get a lend of the DVD?’ Well that’s what I wanted to say. But I was so drugged up that what came out of my mouth probably sounded very different. I remember the doctor laughing anyway. I was pretty happy at the fact that I could still be funny under the influence of a strong sedative. Then came the MRI. I hated getting an MRI scan of my body, not because I was strapped down on a table in a tube with earphones on to block out the really loud noise of the machine. The worst part was that they had the radio playing through the earphones and I had to listen to Live Line for 45 minutes. That’s right. I was strapped to a table and forced to listen JOE DUFFY’s LIVE LINE. It was a new level of torture that has yet to be used in Guantanamo Bay.

After being diagnosed friends and family started Googling Ulcerative Colitis and Crohn’s disease. Then the advice and food suggestions began, and although I was really grateful for everyone’s concern I was overwhelmed with the fact that I would be seriously limited in what I could eat. I was told to eat lots of cabbage as it’s a natural anti-inflammatory. This is true, but all I could think about was a teacher I had in primary school who used to eat raw cabbage every day. We called her ‘The Cabbage’. I didn’t want to be The Cabbage! However, a wonderful dietician in the hospital told me not to develop any anxieties towards food. We are all different and what foods trigger a flare up for me might not trigger anything in you. I started to keep a food diary and made sure to only introduce new foods one at a time. I do enjoy cabbage soup quite regularly now and I’ve been feeling good. The Cabbage knew how to treat her bowel well. Good woman.

Over 20,000 people in Ireland suffer from this chronic illness according to the Irish Society for Colitis and Crohn’s disease. 49% of sufferers have lost or have had to leave their job because of the condition.  So, as World IBD Day (19 May) fast approaches I hope that by having told you a little bit about my bowels you might do me the favour of talking about yours with your family, friends, GP and TD. You can show your support by wearing purple or buying a purple trinket from volunteers you see fundraising on the day. We need to put pressure on the HSE to formally acknowledge this disease by adding it to the Long Term Illness Scheme list. It’s more than just a pooing disease. In Northern Ireland Belfast Castle, Newry Town Hall and Derry Council Offices will be lit in purple on World IBD day. They’re putting us to shame down here so let’s see how many building we can light up purple! If they’re not up for supporting the day just tell them it’s a tribute to Prince.

Thankfully I am in remission at the minute and my Crohn’s is under control with daily immunosuppressant medication, watching what I eat and exercise, albeit extremely gentle exercise as the fatigue is a bitch. Although this is a lifelong illness it doesn’t have to be a life sentence. If you are diagnosed with Crohn’s/Ulcerative Colitis there is support out there. The Irish Crohn’s and Colitis Society of Ireland are great and arrange regular meetups and information nights around Ireland. Don’t be afraid to post about it online in forums. Let’s not be embarrassed anymore! It’s such a shite disease (literally) but it doesn’t need to define you.

Andrea Farrell is a comedian from Dublin. She hit our screens in 2013 when she became a finalist in Rté's New Comedy Awards going on to support Maeve Higgins and perform at the Vodafone Comedy Festivals, The Edinburgh Festival, Kilkenny Cat Laughs and Electric Picnic alongside acts such as Tommy Tiernan, Andrew Maxwell and Joe Lycett. She performs regularly at the International in Dublin where her iconic style and affable stage presence has been bowling over audiences. 'Charming and endearing with plenty of laughs.' The Skinny 'One to watch.' The Independent.