Lately, there’s been a lot of talk about breastfeeding. People are writing about it, websites are making polls about it, women are doing it. Even so, it seems that breastfeeding has been branded a ‘non-issue.’ Women have been breastfeeding their children, well, as long as women have been having children. In this country, there is actual real life legislation protecting women who wish to breastfeed in public. It’s natural, and it’s lovely, and it nourishes little babies. And yet, we can’t seem to stop talking about it. We can’t stop debating whether a woman should be able to feed her child in public without being deemed inappropriate. We can’t stop trying to figure out whether or not a boob is offensive (spoiler: it isn’t). This is not an article about breastfeeding. This is an article about the objectification of the female body that uses the weird stigma around breastfeeding as an example. It’s not an issue after all, right? 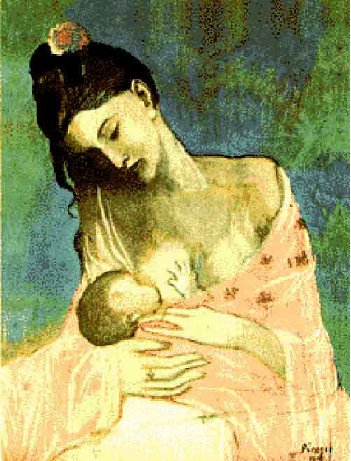 In May, Newstalk presenter Dil Wickremasinghe had a baby. A couple of months later, when Wickremasinghe appeared on TV3’s Midday, that baby got hungry. Wickremasinghe decided to breastfeed her baby on live television. The baby was no longer hungry. Everyone was happy. Except, everyone wasn’t happy. While Wickremasinghe received a lot of positive feedback (which was great), there were those who didn’t take too kindly to seeing a portion of a real life breast (!!) on daytime TV.

“Ever heard of a breast pump?” was the comment that found itself as the headline of a good few, if not the majority, of articles written about Wickremasinghe that day. Now, considering how positive the general reaction to the programme was, you’d have to wonder why everyone seems so determined, and so utterly desperate, to repeatedly share one viewer’s apparent disgust with the top half of the female body. Was it purely for clickbait purposes? Surely, nobody else agrees. Surely, a wildly progressive nation like Ireland would have more sense than to be offended by a boob on the telly. But, they do. And it doesn’t.

A couple of days ago, mothers from all over the country took part in what was called a “non-event event,” where they breastfed their children in public, shared the photos on the internet, proved that nobody cared, and thus, broke the illusive breastfeeding taboo. Great. Except, the real issue is that a taboo exists at all.  Somehow, it almost seems natural to assume that one would be taken aback by seeing a woman breastfeeding – or indeed, a pair of breasts in general – in the middle of the day with no prior warning. Breasts are sexual, after all. They’re used in sex. Female nipples turn people on. That is their primary function. They are inherently different from male nipples, because they are attached to a woman.

Sounds silly doesn’t it? That’s because it is.

It would be wrong of me to suggest that nipples aren’t sexual at all. Because they are. They are an erogenous zone, and sometimes they make people aroused, and that’s fine. What’s not fine is that the sight of a female nipple is so much more controversial, so much more distasteful, and so much more shameful, than a male one. I am not a nipple expert. Nor have I ever claimed to be one. But if a lot of Googling (and a B3 in higher level Biology) has taught me anything, it’s that the only thing differentiating a female nipple from a male nipple is oestrogen, and the ability to produce milk. So if the sexualisation of the female nipple isn’t actually biological, then that means it must be a societal construct – formulated, distributed, and normalised, by good old patriarchal culture.

It seems that the only way a woman’s nipple can be ‘accepted’ is if it’s objectified. For years, no one batted an eyelid at the Page 3 Girls who graced The Sun’s readership with their presence everyday. Nobody seemed to mind that topless women were smiling at us from the top of the magazine stand down the back of the newsagents. But as soon as a woman makes the conscious (or unconscious) decision to bare her chest all hell breaks lose. Imagine, just for a second, if a man was ridiculed for finding himself victim to the ever-so-unfortunate ‘nip slip’ scenario. Imagine if a young boy was sent home from school for wearing a too-revealing-and-very-distracting tank top. You can’t, can you? It wouldn’t happen. It doesn’t happen.

A few years ago, feminist filmmaker Lina Esco launched the ‘Free the Nipple’ campaign, which aimed to remove the stigma and hypocrisies associated with the sexualisation of the female nipple. Although some have criticised the movement for being exclusively concerned with ‘white feminism,’ and unintentionally advocating for the continued objectification of women, the campaign’s attention to the internet’s censorship of the female nipple is worth noting. In an attempt to combat Instagram’s nudity policy (which removes any photo where a female nipple is visible), some women have started photoshopping male nipples over their own, to ensure that their pictures adhere to Instagram’s community guidelines, and to prove just how hypocritical these guidelines really are. Artist, Micol Hebron, even made a special male nipple template to make it easier for users to express their distaste. It was all quite logical, and undoubtedly very clever, but it didn’t really solve the underlying problem of sexual objectification.

All this isn’t to say that male bodies aren’t objectified – because they are (just watch any RuPaul music video ever). But it’s hard to deny the fact that the sexual objectification of the female body has not only been normalised, but endorsed, by society. Just look at every advert, movie, and music video where the scantily clad woman throws herself around the frame, existing only for the benefit of her male counterpart.

And why not, right? Sex sells. And after all, the naked female body is nothing but pure, unadulterated sex. It has no other function. Want to wear a pair of shorts because you’re too warm? Sorry, your legs are too distracting. Fancy feeding your child when you’re out and about? Nah, put your nipple away, something so painfully erotic should never see the light of day. We live in a world where people don’t ask what a women’s body can do, but what a woman’s body can do for them. It’s an objectification that is so engrained that it probably can’t be solved by simply ‘freeing the nipple.’ But maybe, it’s a start.

Out Here | 9 | The Noisy Silence of Galway City Library