Disasters and Social Media; Are You Safe?

In the wake of the terror that shook Paris last Friday night, Facebook activated its ‘Safety Check’ service, allowing people in the area to let their social networks know that they were okay. Welcome to the relatively new world of InstaSafety.

Safety Check was rolled out last year and is a project from Facebook’s Social Good team. Headed up by long-time employee Naomi Gleit, the team’s remit is simple: how to use the massive reach of Facebook to do, well, social good. Some of their other services include sending out amber alerts for missing children in the US, and raising money for charities during times of crisis. 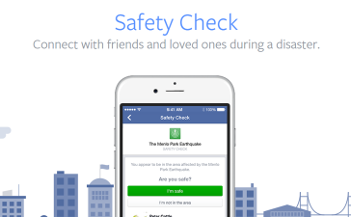 The Safety Check feature builds on work done by Facebook following the tsunami in Japan. The feature is not a unique concept. It is, however, full of potential. Facebook has an unprecedented scope with more than 1 billion users worldwide. A very large chunk of your friends and relatives are on Facebook, and the ability to send out a quick “I’m safe” message in times of disaster could save hours of stress and worry.

It’s a relatively simple process. Facebook determines if you’re in a dangerous area then sends you a notification. “Are you okay?” it asks. You click “yes, I’m safe” or “I’m not in the area.” Immediately, everyone from Aunty Vera to your old high school maths teacher (friended during a drunken bout of nostalgia) knows that you’re safe.

Facebook has an unprecedented scope with more than 1 billion users worldwide. The ability to send out a quick “I’m safe” message in times of disaster could save hours of stress and worry.

Social media has a new role to play in disaster response and recovery. When events are unfolding fast, Twitter is more up-to-date and reliable than regular news providers. A few pictures on Instagram will convey a sense of what is really happening on the ground.

At an even higher level, analysing what, where and when people say things on social media can allow disaster response teams to actually map what’s happening and deliver aid to appropriate areas. A project called Floodtags uses an algorithm to create flood maps. Ushahidi, a non-profit crowd-sourced disaster mapping organisation, plotted 4,000 events during the Haiti disaster, and has run similar projects in Chile, Christchurch and Kenya.

Of course, social media isn’t just used in the aftermath of disasters. It can also be used to stimulate or provoke action. Following the killing of Michael Brown a year ago, the people of Ferguson didn’t wait for the mainstream media to make their voices heard. They used their social networks to air their frustrations at a national and even international level – a feat which would not have been possible only a few years ago. They needed no one’s permission to speak in their own voices directly to the whole world. Speak, they did, and the world listened.

Following the killing of Michael Brown a year ago, the people of Ferguson didn’t wait for the mainstream media to make their voices heard. They used their social networks to air their frustrations at a national and even international level.

Facebook did face some criticism that they rolled out Safety Check for Paris, but not for Beirut. The Paris attacks marked the first time that Safety Check had been used in something that wasn’t a natural disaster. Vice President of Growth, Alex Schultz, responded to the criticisms, by saying “There has to be a first time for trying something new, even in complex and sensitive times, and for us that was Paris.” Mark Zuckerberg added that “Until yesterday, our policy was only to activate safety check for natural disasters. We just changed this and now plan to activate safety check for more human disasters going forward as well.”

Now that Facebook has activated Safety Check in a non-natural crisis for the first time, it will be interesting to see where they go next. You can easily envisage a feature for refugees to check in with family back home, or safe routes out of war-torn areas, or even people getting home safely after a night out with friends. But the question that still remains is, when it comes to social media, are you really safe?

Nat Newman is a freelance writer and editor from Australia. She has lived and worked in the UK, China and New Zealand and now lives in Croatia where she is attempting to learn its impossible language while working on her first novel. She blogs about travel and writing at www.lividlili.com and can be found on Twitter @lividlili

Clodius, King of the Streets of Rome

Is the Back-to-the-Land Movement Experiencing a Resurgence?