Are we really that surprised that Pope Francis met with Kim Davis?

In 2013, TIME magazine named Pope Francis their Person of the Year. They dubbed him ‘The People’s Pope,’ praised his spiritual embrace of those stricken by poverty, and admired his compassion towards those who arguably needed compassion the most. TIME recognised that he gave the same old answers to the same old questions about homosexuality and the possibility of female priests, and yet, they were adamant that this Pope’s attitudes were more progressive than his predecessors’. They seemed fairly certain that by “agreeing to disagree” about certain issues, this new Pope could actually transform the way the world viewed the Catholic Church. And for a while, it seemed like they might have been right. 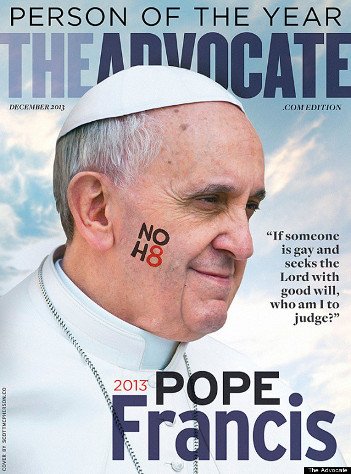 Pope Francis’s first year of papacy was one of selfies, sacraments, and salutations. He expressed his concerns about climate change. He got fan pics with people at the Vatican. He drove around in used cars. He was always smiling and seemed generally sound. Everyone liked him. They even started calling him the ‘Cool Pope’ because of his apparently progressive attitudes and humble nature. In 2013, he stated that “If someone is gay and seeks the Lord with good will, who am I to judge?” and it landed him on the cover of LGBT magazine The Advocate. They knew that the Pope was not “pro-gay,” but still recognised his supposed unwillingness to condemn the gay community, photoshopped a NOH8 campaign symbol on his cheek, and called him their Person of the Year too.

Before becoming a priest, Pope Francis worked as a bouncer in an Argentinean nightclub. Later this year, he plans to release a Christian rock album called Wake Up!, composed of speeches and hymns layered over some pop-rock music. As far as Popes go, he does seem pretty cool.

That was, until, last week when he decided to secretly meet with Kim Davis – the Kentuckian clerk who refused to issue same-sex couples marriage licenses back in July. Davis claimed that she was acting “under God’s authority,” when she started denying same-sex and straight couples their licenses. She was subsequently brought to court by four couples and detained for a grand total of five days for failing to obey court orders.

Since the US Supreme Court’s ruling that the fundamental right to marry should be offered to any couple irrespective of their gender, fifteen counties in three different states have failed to issue marriage licenses when requested. Most have claimed to have had problems with paperwork or staff, but Kim Davis of Rowan County had no problem at all admitting the real reason for her aversion. In her defence she stated that her religious beliefs have stopped her from providing gay couples with marriage licences, as she would not only be violating Scripture, but also her conscience too. Davis’s lawyer made similar comments when he asserted that his client must not lose her “constitutional liberties” just because she works for the government. He then proceeded to compare her situation to the oppression and subsequent extermination of the millions of Jews who lived in Nazi Germany.

So, it’s not really that surprising that a lot of people were shocked to hear that the ‘Cool Pope’ had elected to meet Kim Davis during his tour of the United States. Or was it?

Despite Pope Francis’s inherent coolness, and his promise to never judge any individual based on their beliefs, he has still openly supported the church’s rejection of homosexuality as a sexual act. And why wouldn’t he? He is the leader of the church after all.

Prior to his papacy in 2010, the Pope (then bishop) wrote a letter to some nuns regarding the possible introduction of a same-sex marriage bill to Argentina. In it, he expressed his concerns for the stability of the nuclear family, and feared the supposed discrimination that the children of a same-sex marriage would face. He called same-sex marriage a “destructive proposal to God’s plan,” and claimed that it would “confuse and deceive the children of God.” He made similar comments this year in St. Peter’s Square, as he exhibited his support for the Slovak referendum to ban gay marriage, and encouraged the country’s citizens to “continue their efforts.”

According to Davis’s lawyer, and Davis herself, Pope Francis expressed identical approval of her actions during their meeting. Davis stated that the Pope respected her courage, and told her to “stay strong.” In an interview with ABC news, she said “Just knowing the Pope is on track with what we’re doing (…) it kind of validates everything…”

Pope Francis has always defended the right to conscientious objection – the freedom to choose inaction on the grounds of freedom of conscious or religion – and for a few days, it seemed like his meeting with Kim Davis reflected just that. It’s fine if you don’t want to do something because of what you believe in, but should your own refusal have the power to actively impede the human rights of somebody else; say, someone who has the legal right to get married and who doesn’t even practice your religion? Probably not. In an article for the National Catholic Reporter, Sean Winters argued that Davis should not act as a representative of conscientious objection. “(She) was not jailed for practising her religion. She was jailed for forcing others to practice her religion,” he said.

It took awhile for the Vatican to actually respond to Davis’s allegations concerning the meeting, but when they did they surprised a lot of people (sort of). In a statement issued a few days ago, they swiftly downplayed the whole affair, and claimed that Davis did not have a secret meeting with the Pope, but with several dozen other people who had been invited by the Vatican’s ambassador, and not the Pope himself. They also stated that the only people Pope Francis gave an audience to were his friends and family.

Conveniently, one of those friends happened to be a gay former student, Yayo Grassi, who also brought his boyfriend along to receive a hug from the Pope. Grassi spoke to the BBC about his meeting in an attempt to clear up any suggestions that his old friend supported the views of Kim Davis. He said that he did not believe the Pope had been fully briefed on who Davis actually was, and that he definitely would not have been happy knowing what she had done. Grassi also spoke of an email he had received from his friend some years ago regarding gay marriage, where the Pope had apparently said “I can guarantee you one thing, there is no place for homophobia in my work.”

Irrespective of whether or not Pope Francis did or didn’t know who Kim Davis was, he still met with her. And he’s still the leader of the Catholic Church. And Davis is still going to milk her meeting for as long as she can. In some ways, the Vatican’s disassociation with the Rowan County clerk was unexpected. I, for one, assumed they would have been only delighted to use a bigoted, homophobic, same-sex marriage denouncer as representative of their views on conscientious objection. Maybe I’m wrong, and Pope Francis’s influence is actually changing some of the church’s outdated ideologies. Or maybe, they simply panicked upon seeing the ‘Cool Pope’ image being compromised, and decided they had better send in the token gay friend to balance things out.

Either way, it doesn’t really matter. Pope Francis may seem a whole lot sounder than some of the other Popes, but he’s still the Pope – and Popes aren’t supposed to support gay marriage. And this one doesn’t – it’s not surprising. Just like Kim Davis, he’s acting under “God’s authority,” but unlike Kim Davis, a lot of people still seem to think he’s actually alright.

There are two things we know for certain though. The first is that the Catholic Church is probably never going to be overtly pro-gay… And the second is just because someone takes a couple of selfies, it doesn’t mean that they’re cool.

Charmed – The Sisters and the TV Magic

Episode 15 – B. Dolan and Buddy Peace