The CBI conference is a real treat for anyone who writes for young people. The theme for this year’s conference was Belonging, a theme close to my heart and one which comes up frequently in my YA books. I was keen to hear from the writers at the conference because to talk about belonging means you have to also talk about not-belonging, and I think that’s a common feeling among artists, for better or worse.

Kwame Alexander, Newbury prize-winning author of The Crossover, spoke of the confidence instilled in him by his parents who taught him the value of words. He learnt to believe in in himself as a wordsmith (‘I am the greatest, not because I am better than anyone, but because no-one is better than me.’) and as a result he refused to let his work go unpublished. In a story that reminded me of Walt Whitman’s dogged pursuit of the publication of Leaves of Grass, he spoke about so many rejections but the belief that prevailed- that he belonged to this world of literature. We are the better for his refusal to stop, and I thought about those of us from the North who traditionally struggle very hard with self-love when it comes to art. Could we ever get to a point where we truly felt that nobody else had more right to write than ourselves? Kwame made me consider our cultural differences but added, in a note about diversity and against the pigeonholing of children and literature, that ‘books are mirrors, but they are also windows’. So, I am grateful for the window into his writing life that he brought, and it made me consider what people see when they look through mine.

Daisy Hirst and later Jarvis, both picture book creators, shared something of their journey into writing and their creative process. I absolutely love it when writers and artists show us how their pictures and stories began as random doodles and silly rhymes or overheard jokes or accidents. Jarvis did a live drawing creation of a new character helped by the audience. I’ve seen this at the CBI conference before- artists creating on the spot, showing us how it’s done. It serves to demystify their process but it also demonstrates their skill and uniqueness and my take away question from both presentations was how can I do this?

Is it possible for someone who writes prose for older children? I’ll let you know when I find out!

Celia Rees spoke about her historical research into the Brontës, and writing fantastical stories. Her advice to writers: write what you’re passionate about, don’t worry about trends and publishing- just make sure it’s compelling, make sure your story has an edge that other books don’t have. I enjoyed hearing about how the Bronte children took their world building so seriously, and I had not realised that they had continued to write the same characters into adulthood, allowing themselves complete freedom to imagine any scenario possible. Rees spoke of how when they came to publish their adult novels people were amazed at how complete they were, but that it was unsurprising given how much work they had put into storywriting over the years. I liked the continuity of their story- for them, in terms of work, there was no childhood/adulthood divide- it just continued. We make such a big deal of adulthood, as if it is something more important than childhood and therefore we can’t possibly listen to people like Greta Thunburg, rather than seeing adulthood as simply a continuation of a life which should have been seen and experienced as important all along. 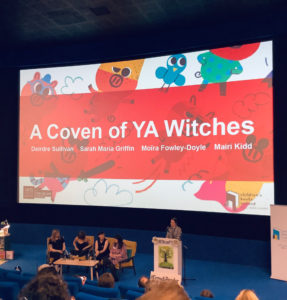 Deirdre Sullivan, Sarah Maria Griffin and Moira Fowley-Doyle spoke about their wonderful Irish witchy books and feminism in a panel discussion which became about women and outsiders. I was glad that the day didn’t pass without the mention of queerness in writing for young people, and, appropriately, these women writers seemed to embody the confidence that Kwame had spoken of at the start of the day.

If you put a huge collection of writers in one room at the same time I don’t know if the result can ever be that they feel like they ‘belong’ together; so many of us write well about youth because we understand the feeling of being an outsider. But it was good to consider the theme. Children’s Books Ireland’s relentless promotion of literacy, especially to disadvantaged communities, is something that I always want to hear about, and there is something is the reaching-out to those children, and the reaching-out of the artists on the stage, that reminds me that to belong is also to offer belonging.

Many thanks to CBI for another excellent conference. 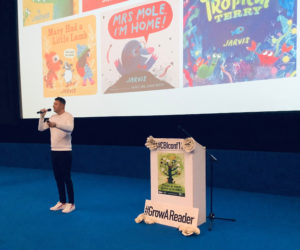 Shirley-Anne McMillan is an author of contemporary Young Adult fiction. She lives in Co Down with her family where she writes, tutors, and works in the local Integrated school as an Alternative Chaplain. Shirley-Anne's third novel, Every Sparrow Falling, will be published by Atom in 2019.

Cleo and the Sea