Full marks on Pitchfork. Hailed by the man himself as “perfect”. Kanye at the very peak of his powers? Craig Fitzpatrick finds that the crown fits like a velvet glove… 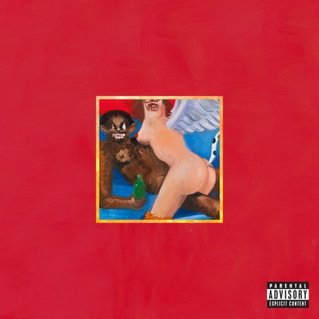 A feverish Virgil, back in the BC day, was having serious doubts about his latest work. Raging over The Aeneid before he died, he departed with the wish that the manuscript of that most epic of poems be burnt. “Kill it with fire!” he would have tweeted two millennia later. Luckily, Emperor Augustus was having none of it and promptly had it published, with the Roman masterpiece available for mankind’s enjoyment and enlightenment ever since.

Am I really beginning a piece on Kanye West’s fifth album by comparing the Chi-Town star to one of the greatest poets of all time? As a Ye stan, I’ve certainly been capable of similar hyperbole on occasion.

While I’ll leave the debate over whether it is The Aeneid or My Beautiful Dark Twisted Fantasy which boasts the better lines for another time – “the only hope for the doomed is no hope at all” is pretty good but where are the Alec Baldwin and Kelly Rowland references? –  the ancient tale is an fine example of why an artist’s opinion of their own work can’t be trusted a jot.

As Jon Landau sighed down a phone line to Bruce Springsteen when a young Boss was sick to his back teeth of Born To Run: “Look, you’re not supposed to like it. You think Chuck Berry sits around listening to ‘Maybelline’?”

Now, it’s not hard to imagine Kanye sitting down to enjoy his own beats with a Cheshire cat grin on his face and tumbler of Hennessy in hand. And he’s certainly never seemed plagued by the same destructive self-doubt as Virgil. That said, he’s recently been underplaying the magic and merit of what is widely considered to be his magnum opus. It didn’t, he argues, move the goalposts like 808s & Heartbreak, or push buttons like Yeezus. In truly Westian fashion, he’s somehow batted it to one side by suggesting it’s too perfect.

These words were part of the “soon as they like you, make ’em unlike you” narrative he was pursuing with Yeezus, of course, and it’s worth pointing out that the boom-bust cycle he experiences with public approval only became a talking point when the sonic boom of My Beautiful Dark Twisted Fantasy went off, spectacularly, in 2010.

If there are no second acts in American lives, nobody told Mr West.

Not only did he recover from ruining Taylor Swift’s golden VMAs moment and subsequently taking shots from Saturday Night Live, South Park and US President Barack Obama, he used it as rocket fuel to fire himself back into orbit. Could he get much higher? Turned out he could. If Virgil was romanticising and immortalising Roman history, Kanye was seeing his own personal struggles as material fit for the same mythical treatment.

His ‘man of the people’ approach had endeared him to music lovers on 2004’s The College Dropout, shifting hip-hop’s mindset from six pack aggrandising to backpack dreaming – a victory that was formalised three years later when 50 Cent squared up to Yeezy in the Curtis vs Graduation showdown which resulted in Fiddy being chased off the charts forevermore. Now Kanye was relating less to the frustrated stockroom worker and more to the king worried that his head was about to end up on a chopping block. The sky-scraping new stakes, the superhero theme music? MBDTF was fare of near-Biblical proportions, proving itself to be irresistible in an entirely different way to the aspirational, preppy odes of old.

To pull it off, Kanye knew he had to go all in, mining everything he had learnt as lyricist, producer and musical director over the years. The culmination of that 10,000 hours of practice to get him back in the game. He says he was offering up a “bouquet”; bringing together all the winning elements that had made his name in one 70-minute collection to remind people of his greatness and forget the foot-in-mouth tendencies.

When he goes so far as to call it an “apology”, however, we need to reassess.

If he was determined to be nothing but contrite, why the “fuck SNL and the whole cast!” sneers on comeback single ‘POWER’? By verse three, he’s almost gleefully recognising himself as “the abomination of Obama’s nation.”

‘Runaway’ is reflective, for sure, a centrepiece that pushes the weepy autotune existentialism of 808s… to its zenith, eventually transcending words and logic to lose itself in an indecipherable digital roar of anguish. But he’s still raising a glass to the douchebags. Elsewhere, he’s accusing the US government of AIDS-related genocide; he’s the black Beatle; he’s the guy in the fancy restaurant shrugging off a moody girlfriend with “cat got your tongue?” quips on the dark CD-turned-sour soul of ‘Devil In A New Dress’; he’s the celebrity clued-in and daring enough to channel Gil Scott-Heron’s cry of “who will survive in America?” and posit that the whole game is rigged to trip everybody up eventually.

A control freak to the last, he’s also taking perverse solace in the notion that he’s sending the girl he spends a record pining over, Amber Rose, off into the world better equipped to make the next man happy. By the way, if you doubt how pervasive the lore of MBDTF still is, remember one of the most memorable moments in the run-up to his latest release has been a Twitter squabble with both that next man, Wiz Khalifa, and Ms Rose.

As shorthand, think on this: Kanye’s big “apology” record hit shelves (in the stores not censoring it) boasting a cover that depicts a naked West being straddled by an equally in-the-nip phoenix/angel/white she-devil. Rather than being an olive branch, this is the best-executed Trojan Horse in pop history. West would concede that it was a backhanded apology, but really he’s playing to his strengths and on his own terms all the way. So ignoring the artist and going to the comedian that plays the role of “the next man” on ‘Blame Game’, here is Chris Rock’s less biased assessment of My Beautiful Dark Twisted Fantasy [jump to 5:25]:

Greatest hip-hop album of all time?

We know Yeezy would happily take any MJ comparison  –  hell, the late King of Pop even gets his own parade float, illuminated by fireworks, in the ‘Runaway’ video accompaniment to the LP. But it’s Purple Rain that seems like a closer relation, as Prince’s grand, kitchen-sink productions and triumphal pop songs coalesce to create an all-encompassing fantasy. Dial it back a decade and Bowie was doing similar, conjuring up this mythical tale of a star beamed down from… somewhere else entirely. So Ye is Prince without the cocksure moves of a sex nymph. Ziggy without the detached alien cool. But way funnier than both. Like those icons, he wants to connect with the youth.

So we have Nicki Minaj brilliantly distorting a Roald Dahl rhyme to get things underway. And that seance in the mall as the fantasy unfurls? No parents allowed. His “listen to the kids bro!” speech upon receiving the VMA Vanguard Award in 2015 was old ground for ‘Dark Fantasy’ listeners.

From that bold opening gambit, there is scarcely a misstep to be found. It helps that this was a collaborative effort focused into laser-beam vision. This album was workshopped and workshopped. This was Ye in Dre mode; not just producing beats, but directing people. This was Kanye gathering all the talent at his disposal to plunder their brains. Dish out encouragement and tough love when required to make them the best that they could be. Coach Kanye.

Retreating to Hawaii after grabbing the mic from Taylor, Kanye was digesting the backlash and licking his wounds as he set about creating his own Rap Camp. Kid Cudi was there, habitually avoiding pre-studio basketball games. RZA was there, spreading the good Wu word. Nicki Minaj was simultaneously receiving pearls of wisdom and learning that Ye didn’t care who knew about his internet porn obsession in studio. “He has nothing but pictures of naked women on his computer that he’d invite me to look at,” she told Complex. That weirdness resulted in the performance of her career, as she laid waste to everyone, including Jay Z, on über banger ‘Monster’. Its legend lives on:

There were many, many others floating in and out. The-Dream located the hook for the colossal ‘All Of The Lights’, a song Kanye couldn’t find the perfect singer for, instead enlisting 14 world famous vocalists to sing on it and still managing to keep the spotlight on him. As for Ye, he’d seldom leave the studio. Sleep was relegated to 90-minute catnaps before he was back making adjustments at the desk, or skipping to another room to agonise over the words to another song. Not quite Fitzcarraldo dragging the SS Molly Aida over a mountain to make his dream opera house a reality, but a Herculean effort nonetheless.

The result somehow amounts to a streamlined sphinx rather than a dramatic pop folly. It sounds massive but is remarkably flab-free. Forget evolution, Kanye West was now an apex predator. MBDTF devoured everything.

Its the gilded fulcrum of his discography for a reason. The College Dropout’s influence was cemented once-and-for-all when the one production aping that era –  the Bink!-supplied ‘Devil In A New Dress’  –  had nothing to do with Kanye. Late Registration’s orchestral manoeuvres morphed into ornate standalone instrumentals. The opulent synthetics of Graduation found a home in even more palatial settings. The autotune croon of 808s… became Jimi’s fiery, soloing Strat.

Jay and Ye couldn’t have encored ‘Niggas In Paris’ into eternity had Kanye not taken some pills, kissed an heiress and woken up in The City Of Light a year before. ‘I Am A God’ declarations don’t happen without at least asking the ladies if they’re up for some pharaoh love first.

The Kimye saga starts here too, if you’re so inclined, as our hero rides ‘Lost In The World’ and the album out with the words he’d email Kardashian as they began their courtship: “You’re my devil, you’re my angel, you’re my heaven, you’re my hell.”

That yin yang conflict is at the core of My Beautiful Dark Twisted Fantasy. Forget the drugs, maybe all he needs is… pussy and religion? Is he the asshole? Is it all one big joke? He’s being battered by a grown-up world as he clings to “child-like creativity, purity and honesty” for dear life. To paraphrase some old poem that nearly never saw the light of day: through his own pain, Kanye had learned to comfort suffering men. The Devil and Jesus were raging inside his head. Outside, he was “lost in translation with a whole fucking nation” and trying to get back on speaking terms. Not apologise, but communicate something bigger. The results were heavenly. Perfect 10s from the critics and a reservation at the summit of the Billboard 200 could only follow. Pop music as high art.

A freelance journalist who came up through the Hot Press ranks, much like the current President of Ireland. Despite this special bond, Michael D still occasionally gets weird about letting him crash on the Áras couch. Favourite interviewees include Vampire Weekend, Danny Brown, Stewart Lee and Ray Davies. Favourite interviewers include Charlie Rose and himself. Favourite Twitter account: @craigyslane

“I Wanted to Get Help, I Was Just Too Scared” | Interview with a Student Suffering from Anxiety

THE PLAYLIST | Shipped Out To Stardom: Irish Americans