Biting social commentary blended with celebratory excess of the highest order. Jay Z and Kanye West’s gold-drenched team-up was certainly memorable, but was it any good? Aidan Hanratty looks closer… 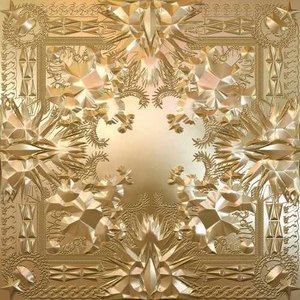 On first listen, these words from ‘Murder to Excellence’ sum up the major themes of Watch The Throne, the 2011 collaborative album from Kanye West and Jay Z. From start to finish, the pair boast of their wealth and possessions: Rolls Royces, Maybachs and other, other Benzes; watches by Audemars, Hublot and Richard Mille; suites at hotels you’ve never heard of. These are things the majority of us can’t even fathom, let alone experience. “I wish I could give you this feeling; I’m plankin’ on a million.” But think of where they’ve come from. “How many people you know have made it this far?” intones Beyoncé on ‘Lift Off’. “They said by 21 I’m supposed to die,” Jay explains, “so I’m out here celebrating my post-demise.”

Watch the Throne dropped in 2011, a year after Kanye’s earth-shattering My Beautiful Dark Twisted Fantasy, and two years before the electro snarl of Yeezus. For Jay Z, it was midway between the pleasantly acceptable Blueprint 3 and the utterly forgettable Magna Carta Holy Grail. That year saw heavyweights like Lil Wayne and Drake release huge sellers (Wayne’s Tha Carter IV sold nearly a million copies in its first week), while LA crew Odd Future caught worldwide attention after several years of slow-burning online successes and Kendrick Lamar quietly released his debut album. Watch the Throne somehow managed to communicate with both of these ends of the rap spectrum – a huge, expensive enterprise that reached out to newcomers, giving them a voice on a grand stage.

A victory lap of sorts for both, the album provided them with the perfect pretext for a world tour, as they performed some 60 shows together (59 shows proper, as well as a Kanye guest spot on Jay Z’s performance at the BBC Hackney Weekender). The shows were riotously enjoyable, racing through hit after hit, not just from Watch the Throne but from their entire collective oeuvre, bouncing off each other and generally having the time of their lives. Highlights (among highlights) included Kanye jumping on as the cop on ‘99 Problems‘, as well as Jay Z performing the late Pimp C’s verse on ‘Big Pimpin’ a cappella. That’s without mentioning the multiple renditions of ‘Ni**as in Paris’ (Dublin got four; Paris got 11 and 12, fittingly). But enough of the narrative, what of the record itself?

Coming with a lavish gold cover by Givenchy’s Ricardo Tisci, which hints at the “couture-level flow” and “luxury rap” within, it comes to life with a melancholic 80s guitar line, a thumping kick and a vocal from Frank Ocean. Back in 2011, before he become the most elusive star behind the most anticipated second album of the decade, he was an understated Odd Future affiliate with one mixtape to his name, which featured his crooning over tracks by Coldplay and the Eagles, as well as genuine hits like ‘Swim Good’ and ‘Novocane’. Throne had the prescience to feature him on two tracks, not least making his voice the first to be heard on the album altogether. The sound is cinematic, if you’ll forgive the cliché — this track was used to push The Great Gatsby, and even now it features in a TV ad for the Audi Quattro (somewhat more affordable than the Rolls mentioned here).

Right from the off, Jay Z’s lines are wonderfully grand and opaque. “Tears on the mausoleum floor, blood stains the Colosseum doors.” This is more than just that ignorant shit you like, with references to Socrates and Plato, Picasso and the MoMA littering Jay’s lines throughout. Kanye’s carnal urges are a major force from the start, however, as he redefines “jungle fever” (“Coke on her black skin made a stripe like a zebra”) and forms a new religion (“no sins as long as there’s permission, and deception is the only felony – so never fuck nobody without telling me”). It feels like a perfect segue from MBDTF’s ‘Hell Of A Life’, in which he and his new porn star bride “both screwed the bridesmaids”.

This polyamory returns later in ‘That’s My Bitch’, (“the second girl with us, that’s our wife”) and ‘Who Gon Stop Me’ (“heard she fucked the doorman, well that’s cool I fucked the waitress”) and even ‘Ni**as In Paris’, albeit in jest (“Prince Williams ain’t do it right if you ask me, cause I was him, I would have married Kate and Ashley”). Sex and religion, cars and coke, this the life that everybody asked for (to quote ‘Run This Town’).

Throne is full of peaks and troughs, from the bloated hot mess that is ‘Lift Off’ – which involved Beyoncé, Seal, Bruno Mars, Q-Tip and more yet still failed spectacularly – to the nimble excitement of ‘Ni**as In Paris’, a flawless victory produced by a then unknown Hit-Boy. There’s ‘Otis’, a thrilling off-the-cuff MPC workout made at the last minute, and the standard but safe Neptunes contribution, ‘Gotta Have It’. Just why is it that Kanye and Pharrell have never made a truly great track together?

‘New Day’ is another track with a heavy hitter behind the boards that falls flat, despite its endearing qualities. A paean to their unborn children, Kanye uses it to reflect ruefully on his past mistakes, joke about his public persona (“I might even make him be Republican, so everybody know he loves white people”) and be a dick about strippers in one verse. It’s interesting to look at some of these lyrics in light of his recent tirade against Wiz Khalifa and Amber Rose (staged, managed or whatever you call it, he still tweeted this). He says he’ll never let his son “ever hit a strip club, I learned the hard way, that ain’t the place to get love” — not because it’s a place where women perform a certain mode of femininity and emotion in order to earn money from paying punters, but seemingly because he thinks that only certain types of women work there. Taken with that line about “permission” on ‘No Church In The Wild’, it shows a dangerously possessive nature, and a twisted view of women — no great surprise, perhaps, but important to note all the same.

Tributes abound, in fact: Jay Z celebrates women of colour like the cast of Good Times and Halle Berry and Salma Hayek, then remembers fallen icons like Biggie, Pac, Pimp C and Michael Jackson. Kanye references Too $hort and Monie Love as well as giving a nod to an old André 3000 line. It’s a celebration of black excellence. That’s why Jay is so keen to emphasis his drug-dealer work ethic – “I went through hell, I’m expecting heaven.” Kanye introduces the theme of black poverty and violence on the otherwise unremarkable ‘Who Gon Stop Me’, a brash display over a disgusting EDM-riffing beat. : “This is something like the holocaust: millions of our people lost.” That’s why Kanye says “till I die I’mma fucking BALL“.

This idea reaches its apex on ‘Murder to Excellence’, a two-parter in which the duo proves that they may be sitting on the throne, but they haven’t forgotten about their listeners. Before Sandra Bland, Eric Garner or Mike Brown, whose various deaths lit up international social media as well as long-running protests on the ground, there was Danroy Henry. In October 2010, the Pace University football player was shot by police who had been called to an altercation in a bar in Thornwood, New York. His car was parked nearby, and he was shot as he attempted to drive away after an officer tapped on his window. No charges were pressed against police, who had also handcuffed him and refused him medical attention following the shooting.

This was by no means the first such death, but it is to him that Jay Z dedicates this song, which ruminates on black-on-black crime and how this originates in the perilous living conditions of inner city America. Murder rates higher than the death toll in Iraq, underfunded schools where students carry guns, the misplaced focus of that very term “black-on-black crime”, these are all symptoms of a racist system, in which black poverty is high and white cops can sue the families of their dead victims. But Kanye’s a self-centred asshole, right?

The track flips, though, as Jay moves from name-checking people killed by police like Henry and Black Panther Fred Hampton (who was killed the day Jay was born) to lamenting the dearth of people of colour on his financial level (“What’s up to Will? Shout out to O“). It’s lonely at the top, and he longs for the day more can join him in the “new black elite“.  So while that line that opened this piece looms heavy over this album, with its stink of success, so too does the pain that Kanye feels in his home city. That’s why he wants to savour this moment in the promised land of OGs.

“How you rate music that thugs with nothing relate to it?” Jay asked on ‘Renegade’ a decade before Watch the Throne. It’s a fair question to ask here. The album is unbalanced, at times wilfully obtuse, its braggadocio off-putting and unrelatable. It features no guest verses but boasts an enormous cast of contributors, and feels bloated and overcooked throughout. There are moments of genius, and real expressions of heartfelt pain, but it’s far from their best work. It’s also aspirational, actively encouraging success, and it seeks a different truth to the dominant narrative. Hey, even if it just set the stage for the tour, that was one fucking tour.

Aidan Hanratty is a Dublin-based writer for various sites, as well as providing weekly content in his music mailout Bandcloud. His interests can be described as bleepy bloop, monastic chant and rap.

Campbell Versus Campbell, in the Divorce of the Century