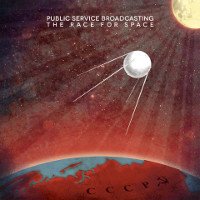 The Race For Space

“If we have a social message, it might be a slightly too vague one about positivity and belief in human endeavour and human achievement and technological progress… I think you have to find new ways of saying new things.”

The words of Public Service Broadcasting’s J. Willgoose, Esq. shortly after the release of 2013’s Inform – Educate – Entertain; a stirring debut and a statement of intent. It presented a driving sound spliced with samples from old public information films, archive footage and propaganda material. In essence, it found a new way to say old things. While an impressive, engaging and clever listen, there was the sense that this could be a ‘one and done’ project, that such a niche concept may struggle to sustain.

Enter The Race For Space and the legitimate prospect of the ‘difficult second album’ cliché. Cue a band flourishing and truly finding their footing. The basic template remains, only now the sounds and subject matter carry more weight. With the focus lifted from a more generalised vision and shifted firmly towards the Cold War-tinged space race of the 1960s, Public Service Broadcasting come into their own. Radio transmissions of the Apollo missions and newsreels mesh with PSB’s more vibrant sound.

There’s a story here, a highly compelling one that starts with John F. Kennedy’s 1962 “Address at Rice University on the Nation’s Space Effort” in which he clamoured for public support in his bid to one-up the Soviet Union and put man on the moon. It is a story which takes no sides, which pays tribute to all involved in this heated battle. As such, ‘Sputnik’ takes the baton of the title track – itself a knowing mix of Kennedy’s speech and heavenly choral refrains – and delivers a house jam history lesson that swells organically prior to an almighty burst. Immediately it is clear that Public Service Broadcasting have raised their musical game. Inform – Educate – Entertain doesn’t necessarily lack sonic acumen but The Race For Space makes its own significant leaps. As it should; Willgoose and his faithful drumming companion are in the cosmos, after all.

Further recognition comes in the form ‘Gagarin’, named for the first man in space. You’d be forgiven for thinking that Yuri Gagarin, for all he inspired, was unlikely to prompt the kind of wild funk celebration that Nile Rodgers might covet, but here we are. Triumph turns to tragedy, however, as a static-fuelled report of the deaths of the Apollo One crew plays out over delicate string work. It’s a testament to The Race For Space that this marriage never approaches exploitation or feels ill-judged. Instead, it makes for a sobering, sharp juxtaposition, one that recalls the balance of The Evpatoria Report’s beautiful ‘Taijin Kyofusho’.

It is an album that can move from one extreme to the other in a matter of seconds and never once feel jarring. The charge and rhythm of ‘E.V.A’ and the pop masterpiece of ‘Go!’ float side by side with affecting efforts like the aforementioned ‘Fire In The Cockpit’ and ‘Valentina’, the latter gifted enchanting life by Katherine Blamire and Jessica Davies of Smoke Fairies. “There’s a cheer in this room“, notes a typically stoic overseer as ‘The Other Side’ ascends into its dizzying stratosphere. He keeps his cool even after he informs those listening of a major breakthrough in technology, history and human achievement. It is a moment in which emotion bubbles beneath the surface, where awe and endeavour gracefully embrace. A new way to say an old thing. A new way to say a new thing, the “inform, educate, entertain” maxim realised to full, captivating effect. Add it to the curriculum.

FOUR OUT OF FIVE

Space Week | THE PLAYLIST #13 | The Skies, The Stars and Everything in between…

Review | Naoise Roo casts a spell over The Workman’s Club