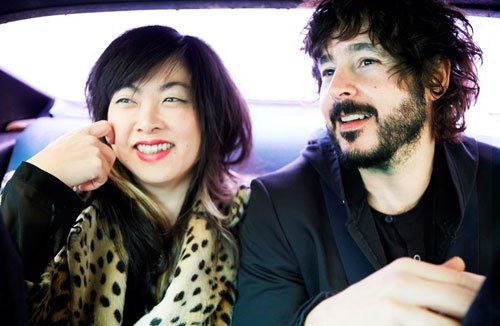 Straight from the infamous Rancho de la Luna studios, which brought you the gritty desert sound of Arctic Monkeys and Queens Of The Stone Age; mixed by the producers/engineers behind Nirvana and Foo Fighters comes yet another stoner-punk progressive psychedelic opus of an album, Enduro.

Enduro, which features members of Eagles Of Death Metal, Sound City Players and Broken Social Scene is second to Hawk Vs Pigeon, the first full length release by the rasping guttural punk union that is Dearly Beloved.

Dearly Beloved’s Niva Chow and Rob Higgins have lived for two years by the mantra ‘hard work is its own reward.’ They have spent over 18 months with their feet firmly planted on a greasy, dominated stage, in a van or on the dusty floors of the Joshua Tree studios, working, working, working.

Out of this relentless dedication to the craft has come a band who are fully ripened and prematurely inveterate; a band who’s blood, sweat and – I won’t say tears – have earned them a sound akin to a well seasoned punk rock group.

Enduro has been described as “… a bristlingly anti-social punk-metal juggernaut with an old school rock n’ roll soul that sounds as wild-eyed as a record made at the end of nearly two years of roadwork should.”

And I do agree; Enduro is an incredibly mastered album that sounds confident and bursts at the seams with raw know-how and style. It takes you on a drag race through the lusty deserts of California and leaves you feeling thrilled and almost satisfied that a sensation similar to something only Queens Of The Stone Age or Eagles Of Death Metal could evoke in you has somehow been slightly recaptured by Dearly Beloved.

But only slightly. As someone who was bottle-fed on bands like Queens Of The Stone Age, The Distillers, NOFX, The Pixies, Misfits and the like, my only criticism of Enduro is despite all the hype and the obvious graft in this album, as a fan of similar groups there is for me, a little something missing.

Though I admired the grainy vocals and psych sound, the intensity I crave and expect from a work that was produced in Rancho De La Luna just wasn’t there. Like a love interest that just doesn’t quite ‘do it for you’ I didn’t experience the same lucid dream-like effect I did with Queens Of The Stone Age or even Brody Dalle’s solo work.

A stoner group isn’t just a band to light up to. It’s a metaphor for the type of reaction it should stir in you. I expected the album to produce that ‘umph’, that dream-like state that music sometimes brings about where the world around you whirls into obscurity and your spine tingles with those chills you get from a sound that responds to you on a level nothing and no one else can reach.

Maybe I’m being dramatic, but as a die hard fan of all facets of punk rock, this album was fun and entertaining but it wasn’t magical.

Enduro is however, reminiscent of that past magic and it is an incredible piece of music by a very talented band and I do believe there is bigger and better things to come from Dearly Beloved. They are a group you’d need to see live before making a final verdict on and though they are highly developed I still think they have a tiny bit more developing left in there somewhere.

Maybe that’s a contradiction, but that’s what punk rock’s all about isn’t it?

The track from Enduro that stood out to me the most was Olympics Of No Regard. It’s the most hard hitting track on the album and sort of sums up Dearly Beloved’s spirit and their sheer musical ability. The long distant throaty howl is what makes this genre for me and the mix of female and male vocals is a nice edge to their sound.

Enduro is a record worthy of your hard earned buck and will induce some pleasant nostalgia, however I have a feeling the best is still yet to come from Dearly Beloved…

I'm Lauren. Writing is my life-long passion and compulsion. Music, art and travel are my other part time ventures when I'm not in college and I also do a bit of community radio. I hope you enjoy my posts!

Album Review | Thorin Loeks & The Dreamy In This Place

Album Review | Moon and Bike Deliver The Ambient One