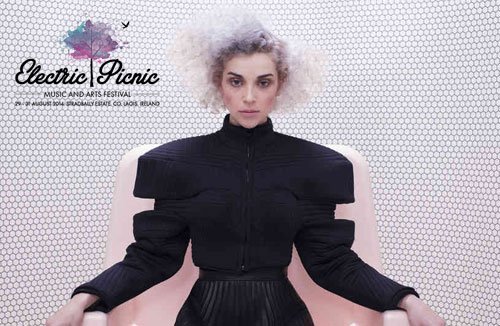 She’s a Cyborg, But That’s OK

If, like me, you’ve sometimes wondered what happened to Young-goon – protagonist of Park Chan-wook’s dark South Korean rom-com from 2006, I’m a Cyborg, But That’s OK – then the release of St. Vincent’s eponymous album earlier this year gave you a glimpse into the alternate reality in which she became a musical maestro, a performer in complete control of her craft.

With the release of her fourth solo album – and subsequent touring and promotional appearances, including her upcoming set at Electric Picnic – St. Vincent has combined many of the elements that make her such an enthralling artist and, in doing so, created the pinnacle record in her oeuvre to date.

I’ve been intrigued by St. Vincent since the first time I saw the video for her song ‘Actor out of Work’. It was how the rampant music and lyrics jarred with the unmoved, almost androidal, appearance of St. Vincent. This is something that has continued to be a thematic element in her albums and performances since then, in songs like ‘Cruel’ and ‘Surgeon’, from the album Strange Mercy, and ‘Birth in Reverse’ and ‘Digital Witness’ from St. Vincent. Even in the more obviously personal songs, such as ‘Year of the Tiger’ and ‘Severed Crossed Fingers’, she remains somewhat distant or standoffish; but this only serves to draw us in closer.

When St. Vincent performs, she performs. She becomes as much an instrument for her songs to be played through as the creator and performer of them. Her robotic movements are every bit as hypnotic as the music. Yes, she’s a cyborg, but that’s ok – in fact, it’s f**king fantastic.

Michael Naghten Shanks lives in Dublin and online. His writing is featured or forthcoming in publications such as Gorse, The Penny Dreadful, 3:AM Magazine, Poems in Which, New Irish Writing, The Quietus, 30 Under 30 (Doire Press), New Planet Cabaret (New Island) and elsewhere. He has read at events in Ireland and the UK and been listed for various prizes. He is editor of The Bohemyth.

Guardians of the Galaxy | Review