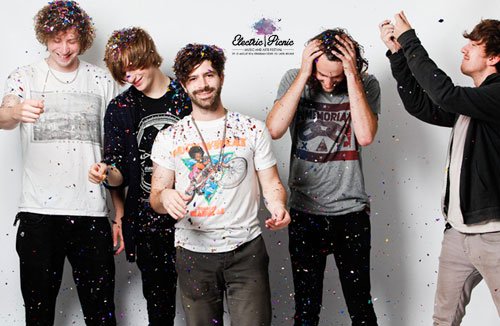 It’s been almost a year and a half since Holy Fire was released but Foals are still on the tip of the industry’s tongue. Having released three impressive UK top ten studio albums since their formation, their sound has established a unique benchmark to which current indie rock groups hold themselves. The live element of the group has not gone unnoticed by publications such as Q and NME, with Foals picking up Best Live Act awards and nominations, meaning that the lucky ducks heading to Electric Picnic this year have an award-winning set to look forward to.

Foals are all about the catchy hooks that embed themselves into your head for days, but you just don’t seem to mind. Leaning on the heavier side of indie-rock, their math rock, electro, Talking Heads influenced sound is wholly unique and nuanced, with each album’s production more exceptional than the last. Holy Fire opens with a Mogwai-esque introduction, which gradually layers dream-like melodic guitars and cut up illegible dialogue, until the album fully kicks off into pure scratch tone bliss. Suddenly, an addictive and slivering melodic hook is introduced with Inhaler, a gorgeous blend of the electronic, post-rock and independent influences and elements that make up Foals sound. Inhaler was written for a festival audience, with the capacity for one to pinpoint the exact moment that the crowd surges into a moshing clusterfuck of drunken angst. Another gem that will have festival goers hooked from the get go is the hugely popular My Number, which seems to be oddly self-aware of its ‘indie pop music’ vibe, inviting the curious to the album, and locking them into the darker realms of the genre.

Yannis Philippakis is everything you could want in a festival front man; confident, talented, vulnerable and entirely humble all in one. His is a multifaceted performance, with rock-god personas emerging during heavier tracks, and his helpless exposed singer-songwriter identity peeking through in others. The gorgeously politically charged Moon uncovers the poetic capabilities of Philippakis’ penmanship, and the ability of the group to capture an instance of a mood or feeling, and build upon it until it is entirely developed and yet indescribable. The melodic post rock timbres lie at the heart of Foals in an inferno of emotion and despair, evoking a feeling that you’re sure you’ve felt before, but have no idea where or why or how. They have the tendency to break your heart and then take you out on the town to rebound all during the span of an album.

Fans of the band do not need to be told to see their set this year; it will be electric, brilliant, emotional and cathartic. However, to those that are unsure, those who know a song or two from an advert or a Skins OST, treat yourself to one of those rare occasions where the music and performance of your new favourite band unfolds before you. In a field. In Co. Laois. Sure where else would you get it.

Andrea 'Dre' Cleary is the Music Editor at HeadStuff, and founder and current CEO of Aftermath Entertainment and Beats Electronics. Her favourite drink is an old fashioned, her favourite album is Graceland, and she has never settled on a favourite Beatle.
Twitter: @MidnightDreary_