In Conversation | The Devil in Bob Gallagher

When I was trying to arrange an interview with music video director Bob Gallagher, he had one request; we were to go somewhere that serves Fat Frogs. Unfortunately, due to scheduling conflicts, we never made it to a pub but Bob upheld the charade that he was sipping on the sugary, bright green elixir as we emailed back and forth to discuss his work. If you’ve been following the gloriously guttural sounds of Dublin group Girl Band, whose debut album Holding Hands with Jamie is tickling the fancy of many, you’ve probably seen Bob’s work. And if you’ve seen it, you definitely haven’t forgotten it.

His videos with Girl Band jokingly toy with the macabre and as the plots thicken, things get very, very dark, adding to and exaggerating their already twisted and grainy music. For example, ‘Why They Hide Their Bodies Under My Garage’, a Blawan cover, sees a pathologist dissect and examine a greying corpse and as the song builds to a thudding climax, the two bodies engage in a demented dance often seen at a family wedding when AC/DC comes on. Bob finds a way to take a subject matter, warp it and then, somehow, make it relatable. Uncomfortably so.

His videos are hypnotic and Girl Band’s music penetrates your mind – with full consent – so for Girl Band and Bob to have found each other is a match made in heaven. “I think tonally we match up well in that, between us, we’re prepared to go quite weird with subject matter, but we we also try to retrieve it from the the dark corners with a bit of humour,” he explains as he knocks back his first Fat Frog. “I met Geoff at Rough Trade [Geoff Travis, founder of Girl Band’s label Rough Trade Records] after the first video came out and he said he’d be interested to see where Girl Band and I would draw the line with the next video. I said I don’t think there really is a line as long as we all find it funny, which I think is still a fair assessment.” 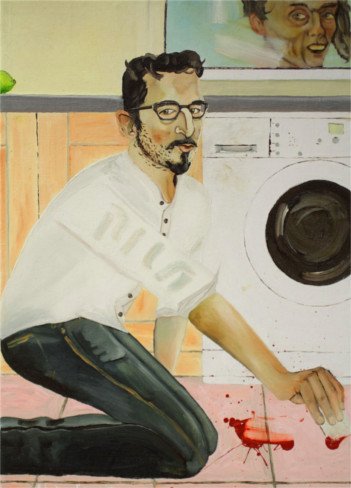 Bob’s showreel includes videos with some of Ireland’s most exciting and interesting musicians like Le Galaxie, Floor Staff, Participant, Spies and Elaine Mai. As bands reappear on the showreel and his client list expands, the same actors keep on cropping up. “You can’t help but bond with people once you’ve wrapped them in cling film or watched them being spanked or autopsied,” he says. “I think with casting if you find people who are good actors, and who you can have fun with on set that’s absolutely invaluable so I do tend to work with the same people a lot.”

Although there is a strong loyalty between Bob and the musicians he works with, there is a rumour going around Dublin that he may, in fact, be the devil. He quickly dismisses this: “I think that when someone makes an outrageous claim that ‘you’re the devil’, you have to ask ‘who’s profiting from this, and how?’” The rumour has gained extra strength since Bob commissioned an oil portrait of him as a devil by Dublin artist Salvatore Fullam.  When it comes to Bob’s work, it’s hard to tell if there’s actually dark magic involved, if it’s just true effects of WKD-based cocktails coming to light or if he’s just one a very special kind.

At the core of many of Bob’s videos is love and relationships. Spies’ ‘Sea Creature’ and Particpant’s ‘Shelter’ are, in a way, romantic shorts but instead of a guy winning the girl, we’re dealing with the love between a man and a mermaid and the bittersweet relationship between two snails. I ask if he would ever consider bringing his view of romance to the big screen. “The heteronormative love affairs of rich, good-looking white people could be interesting, I suppose,” he says. “It certainly seems to be more lucrative. I think my sensibility is better suited to snails though.”

Bob grew up in the 90s and that was a hugely important time for music videos. Directors finally realised that they could use more than hot girls on cars and explosions to tell a story and music videos could be a work of art. Iconic videos by Jonathan Glazer (‘Virtual Insanity’ – Jamiroquai, ‘Karma Police’ – Radiohead), Chris Cunningham (‘Frozen’ – Madonna, ‘All Is Full of Love’ – Björk), Spike Jonze (‘Praise You’ – Fatboy Slim, ‘Drop’ – The Pharcyde) and Michel Gondry (‘Let Forever Be’ – The Chemical Brothers, ‘Human Behaviour’ – Björk) all had heavy rotation on MTV but it was R.E.M.’s ‘Losing My Religion’ by Tarsem Singh that had the biggest influence on Bob.

“I do remember as a child being particularly struck by religious imagery in videos being taken out of a context that was very familiar,” he says. “The way the song combined with the visual was really magical. I remember being able to comprehend that the dancing man doing the singing, and the other images weren’t literally connected but that they worked together and gave you an incredible sense of feeling. The combinations raised questions and that was exciting.”

Of course, while some directors got it right, others just didn’t know what the hell they were doing but Bob took that on board nonetheless “There were also a lot of shit videos that were just very much of that same era. They were on the MTV loop in the background and they equally slipped into my subconscious,” he says, noting that Gary Barlow and Robbie Williams have a tenuous link to Girl Band. “Actually one of the key references for the video within the video in ‘Pears for Lunch’ was Take That’s ‘Do What You Like’. You’ll see the shots we directly ripped off.”

“Only a small portion of what we shot made the final cut, probably for the better to be honest. I think that’s one case where I would have loved to go further,” he adds, “but none of the band were prepared to let me do such extreme snap zooms on their crotches.” While we wait with bated breath for the director’s cut of ‘Pears for Lunch’, there’s no doubt that the alcopop loving director will continue to find new and wonderful ways for us to shift uncomfortably in our seats.

Bob will be speaking on a panel as part of this year’s Hard Working Class Heroes festival – The Return of the Video with Brendan Canty (Feel Good Lost) at 2.30pm in the Pitch Room of the Digital Hub. For more of Bob’s twisted creations, visit bobfilmsthings.com

“Love of My Life”

A new exhibition for everyone by Cillian Finnerty, Fergal Styles and Salvatore Fullam.
Couples (two at a time) from 4 til 6. Everyone from 6 till 8.

Louise Bruton is a freelance journo, a popculture addict and a 90s music aficionado. Don't slag pop music near unless you are ready to fight.

Exhibitions: October brings “Without a Future”, “Journeys”, and “House Portraits”

Album Review | The Eclectic Sounds of The Jacknife Lee