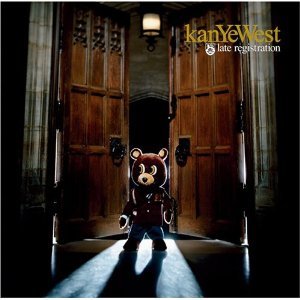 A decade on from the release of Nas’ Illmatic, a debut that stands as arguably the most important (and flat-out greatest) rap album of all-time, 2005 was ready with a few fresh milestones of its own, bringing hip-hop to a whole new level yet again.

In a year that brought stellar Dr. Dre-assisted gangsta bangers from both The Game and 50 Cent, the then-Young Jeezy dropping his magnum opus of street anthems Let’s Get It: Thug Motivation 101 and other vital offerings from the likes of Lil Wayne, Eminem and Common to name but a few, the genre’s popularity and critical stock were on the rise. It was also bouncing back big, a year after a young polo-wearing backpack artist from Chicago had suffered a very public defeat. At the 2004 American Music Awards, with his own debut The College Dropout making waves, Kanye West lost out to country singer Gretchen Wilson in the Best New Artist category. Storming out in disgust, he later told reporters backstage: “I felt like I was definitely robbed, and I refuse to give any politically correct bullshit comment. I was the Best New Artist this year.”

He subsequently apologised to Wilson, saying that he “was raised better than that. It was very ignorant.” The first, but not the last, award show fiasco from Kanye.

With his 2005 follow-up, Late Registration, Kanye not only had something to prove to the those who had snubbed him, but was also faced with breaking that age-old ‘disappointing second album’ hip-hop curse that has afflicted even greats like Jay Z, Nas, Ma$e and The Pharcyde. ‘Never Let Me Down’? Well, investing two million dollars and over a year into the project, Kanye didn’t disappoint. Primarily self-produced, with help on several tracks from US composer Jon Brion, LR showcased Kanye’s musical depth as well as his growth as a lyricist. Moving away from his now much-mimicked sampling technique of using sped-up vocals from old soul records, his new sound was highly influenced by Portishead’s collaboration with the New York Philharmonic Orchestra on Roseland NYC Live. It still had soul, but its ambience was enhanced, the music backed by string arrangements and brass.

Straight from the off, we get a blast from the past with an opening monologue that finds DeRay Davis impersonating the late, great Bernie Mac. The same school administrator heard in The College Dropout’s ‘Intro’, he lectures a disinterested Kanye with the words: “You think this is promised?/Well ain’t nothing promised to you!”, an idea later replicated in the rapper’s Grammy acceptance speech when his debut won Best Rap Album.

After a yell of “Wake up Mr. West!”, the album comes to life.

First song proper ‘Heard ‘Em Say’ features Maroon 5 frontman Adam Levine as a lonely drum pattern gets swallowed by the hypnotic piano lick from Natalie Cole’s ‘Someone That I Used To Love’. Kanye reflects on the harsh realities of life, especially those of the black community in America, and decides things happen for a reason. The track contains notable lines like “Before you ask me to get a job today/Can I at least get a job on the minimum wage?” and the controversial “I know that the government administers AIDS”, the double entendre playing on the conspiracy theory that AIDS was a man-made disease placed in Africa. Kanye would shock the world with that view during the Live 8 benefit concert a month before the album release. The song’s not all doom and gloom, though, as Levine provides a warming chorus, reassuring listeners that hope can keep anybody on their feet.

After a snare count-in, Curtis Mayfield’s ‘Move On Up’ horns explode and ‘Touch The Sky’ is here. Swizz Beats’ slowed-down sample, accompanied by his customary hard-hitting drums, provides an invigorating backdrop as Kanye pours his ego and sense of self-worth out on the only guest production feature on the album.

On lines like “I’m trying to right my wrongs/But it’s funny them same wrongs helped me write this song”, he’s directly addressing his conflicted feelings about the creation of ‘Jesus Walks’ and other hits, while the song notably features the breakthrough appearance from fellow backpack-wearing Chi-Town artist Lupe Fiasco. The video would become famous for other reasons. There was the settled Evel Knievel lawsuit for using images and patterns that matched Knievel’s jumpsuit in the big budget, Pamela Anderson-starring promo, then when it lost out to Justice vs. Simian’s ‘We Are Your Friends’ at the 2006 MTV EMAs, Ye stormed the stage in utter dismay, citing the fact his video cost millions of dollars as a reason why he should have been victorious and arguing: “If I don’t win, the award show loses credibility.”

Next off the conveyor belt of hits is the tongue-in-cheek ‘Gold Digger’ with Grammy-winning singer Jamie Foxx updating Ray Charles’ ‘I Got A Woman’ (Foxx having just picked up an Oscar for playing Charles in the movie Ray). The extremely catchy track examines the “gold digger” phenomenon in a fun and interesting way, comically detailing how women make their money off rappers and how if “She got one of your kids/Got you for eighteen years” until “on the eighteenth birthday he found out it wasn’t his.”

It’s worth noting that features on LR are plentiful but never feel forced. On ‘Drive Slow’, Kanye pays homage to the art of creeping through the hood with slow-flowing GLC and Swishahouse affiliate Paul Wall accentuating the sedated sample of Hank Crawford’s ‘Wildflower’. Slowing it right down toward the end by ‘screwing’ – a technique popular in Southern rap – is a nice homage to the late, pioneering DJ Screw.

‘My Way Home’ is the only track on the album not to feature Kanye vocals, leaving it up to fellow Windy City rapper Common to tackle Gil Scott-Heron’s ‘Home Is Where The Hatred Is’ (such an unusually long vocal sample that Heron got a writing credit). Interestingly, the track was recorded for Common’s Be but missed the cut. Kanye clearly retained his confidence in it.

Mr. West doesn’t shy away from letting his political views be heard and LR found him directly criticising the George W. Bush administration. The socio-economically charged ‘Crack Music’ is a perfect example. The Game features – albeit only on the hook, as Kanye felt the verse didn’t fit the concept – as the crack cocaine epidemic in America is compared to the ‘addiction’ of hip-hop in America. Again, Kanye spouts conspiracy theories, asking: “How do we stop the Black Panthers?/Ronald Reagan cooked up an answer.”

“Who gave Saddam anthrax?/George Bush got the answers” references the fact that Dubya gave Saddam millions of dollars to fight Iran, which was used to purchase bio and chemical weapons. Famously, Ye backed up his anti-Bush stance at a televised Hurricane Katrina benefit concert when, addressing the nation alongside Mike Myers, he went off-script to declare: “George Bush doesn’t care about black people.”

‘Crack Music’ ends with a powerful, partially a cappella poem from Chicago spoken word artist Malik Yusef which discusses how the “dark diction” of rap “has become America’s addiction/Those who ain’t black use it/And we gon’ keep banging up this here…crack music.”

He similarly forces the listener to recalibrate their moral compass on the chilling ‘Diamond From Sierra Leone (Remix)’, featuring Shirley Bassey’s booming ‘Diamonds Are Forever’ and Kanye’s mentor Jay Z. Kanye spits on the taboo subject of the blood diamond trade in African nations, while Jay plays off the symbolism of the ‘diamond’ – a symbol synonymous with Jay’s Roc-A-Fella label to which Kanye is signed. Both this and the bonus track original are stand-outs and show Kanye’s creative scope and the complexity of his conscience.

But this project certainly doesn’t just hit on harsh realities, hardship and how the system lets the people down. Kanye also opens up and shares the ‘family man’ part of his personality for the first time. On ‘Roses’, featuring a soulful outro from Patti LaBelle, Kanye talks about his late grandmother’s near-death experience around the time of recording the album. The sombre approach and tender touch can also be found on the beautiful ballad that is ‘Hey Mama’, carried on a lullaby-like sample from Donal Leace’s ‘Today Won’t Come Again’. Originally written in 2000, long before his mother Donda West’s sudden passing due to cosmetic surgery complications, Kanye raps about his love for her and appreciation for raising him alone and instilling him with the right values. The song took on an extra dimension after her death in 2007, with Ye delivering emotionally-charged performances of it at every show on the Glow In The Dark world tour.

Another stand-out is the mammoth ‘We Major’. The nearly eight minute-long song boasts horns, a droning bass line and a disco groove, and famously helped bring together the then-feuding NY heavyweights Nas and Jay Z. At that point, only Kanye could have made it happen. The song is mostly remembered for the Nas verse as he ruminates on his duality – his ability to rap about both commercial themes like cars and ‘ice’ but also more conscious themes like the state of Black America. Illmatic is also discussed, as he acknowledges that he will never be able to replicate its critical success, recalls the album’s advanced production, lyrical techniques and poetry, and reckons each new hip-hop release will always be compared to it. Halfway through, Kanye’s cousin Tony Williams – a regular backing singer for the star – delivers something approaching a show-stopping outro. But as the music fades, Kanye interrupts, asking: “Can I talk my shit again?”

The beat kicks back in at full volume, allowing Ye to talk “his shit again” and give props to his cousin and co-producers Jon Brion and Warryn Campbell.

Before Kanye became king of the fashion world, before he became part of a reality TV family, before Kanye became Yeezus, he was the polo-wearing backpack rapper who was relatable to the masses. Rapping on topics that struck a chord with people from all walks of life over game-changing production, he always remained true to himself. There isn’t a bone you can pick with Late Registration, apart from some outdated skits – which hip-hop went on to outgrow with Kanye (as usual) leading the way. From a musical and lyrical standpoint, it really is a timeless classic.

A self proclaimed Hip-Hop/Rap connoisseur. Knows all things hip-hop/rap related, from Eric B. & Rakim to Fetty Wap. Can usually be found on the Hot Press circuit. Half man, half amazing.