Season of Mists came about as something of a compositional challenge that Variant Sea set themselves to complete in under a month. Pianist Luke Duffy and guitarist Shell Dooley took what started as a side project and evolved into their debut EP. 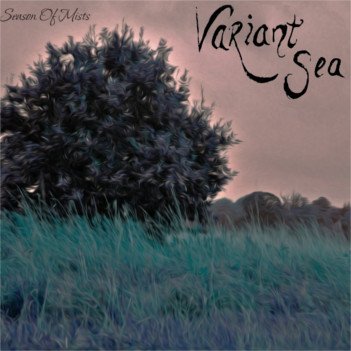 Starting with an initial concept, the pieces began to take on more vivid shapes of their own. We connected the record to the writings of John Keats who in turn then inspired the rest of the EP. We took influence from his work ‘To Autumn’ for each track, inspiring the titles and even the overall artwork of the record.

To put the music together, the piano parts were composed entirely before the guitar layers were added, and although there were initial ideas of the shape and structure, there remained freedom for each of us to include our own personalities in each track. Creating the right soundworld through timbre and melody was essential for this record.

‘River Sallows’ was the first single released off the EP. The track became the most melodic of the pieces for both instruments. We intended to create a luminescent sound that grew to moments of tension before dissipating once again. This contrast between tension and immersion is an idea that we played with throughout the rest of the EP.

‘Sinking As The Light’

The most uplifting of the tracks on the album, ‘Sinking As The Light’ has melodic connections to the first piece, but the piano features chord-like movement rather than a continuous line of melody. The guitar here explores a variety of sounds, from bowed strings to an almost choral effect. This piece serves well as a framing device for the following track while still echoing the first.

The EP grows in melodic complexity up to this track, which is definitely the most sonically dense piece, as well as the most dramatic. As it builds throughout, textures are piled on top of each other culminating in a powerful climactic section. This piece climbs to the highest dynamic peak within the EP, setting up the descent towards the serene atmosphere of ‘Gathering Swallows’.

After the tension of ‘Hours by Hours’, this track rounds off Season of Mists as a more introspective piece of music. The guitar textures provide a supportive base for the beautiful simplicity of the piano. We felt that this track closed the EP perfectly, taking something from all the tracks and really summing up the Variant Sea sound.

Shell is a contemporary and electroacoustic composer from Kildare. Shell is one half of Dublin's post rock duo Variant Sea and is currently works in music composition and audio editing for media.

Mental Health in Cinema – Inside Out, Song of the Sea and The Healing Power of Feeling

Album Review | Let’s All Get Nervous With Kevin Nolan