At 2pm one Thursday afternoon Chris Kabs walked out of his job as a financial accountant and told his boss “Yo, I gotta go follow my dreams”. Since then he’s been spending every day writing, mixing and recording music in his studio in Dublin 2 where he meets us on a balmy summer’s day.

“Mind if I take a Snapchat? I got a buncha people following me” – Social media duties are a priority for Kabs but after a quick introduction to the crew, he’s drawn to the grand piano in the corner of the room where he spends the next fifteen minutes immersed in his music.

Chris began playing piano at a young age but started out playing drums, and since moved onto guitar and vocals. His love of music began during his church going days in Sweden where his Father worked as a pastor. “My Father had a cave full of every type of instrument and I would just sneak in there and try different things out”.

When I ask him if he is religious he tells me “Music is a reality. When I write music it’s my story. It doesn’t interfere with what I believe. I choose to be a free spirit” He goes on to speak about the connection between creativity and spirituality “People who are creative. We don’t have time to waste. We are very spiritual. We think deeper than just the obvious thing. We go very deep with our thoughts because that’s where we pull out our resources. We don’t waste time to just chit chat. We go to the studio and create”

Though Chris left the office behind, the regimented routine and work ethic never left him. He still spends five days a week waking up early to work on his craft. Between solo work and collaborating with other artists he averages two to three full songs a day, he tells HeadStuff. When asked where he gleans inspiration from he replies “everywhere”,

“Even as we are talking right now I am feeling inspired. I know what I’m gonna do when I go back to my room … Sometimes you get inspired by people. Just by the way they are. Right now as you speak. I’ve got something playing right now.”

Chris moved to Ireland thirteen years ago but grew up in Stockholm, Sweden and also spent some time living in France and the Ivory Coast – “I’ve been around”. He speaks English, Swedish, French and Lingala and has written music in three of the four languages. He credits his sound to this varied upbringing. Amassing influences from the different environments he has found himself in. But for now his focus is on Dublin.

“I really want to invest in Ireland. Local artists should focus on their country first, before going elsewhere. Dublin is great for many reasons. It’s still fresh. It’s still new. We are among the artists who are making waves out there. This city, between three or four years, is going to be the biggest music city. I can feel it” He lists the Grand Social and the Sugar Club among his favourite venues. 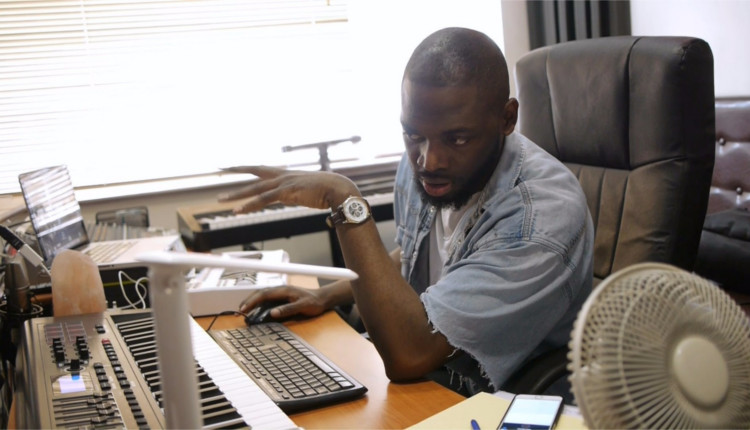 He cites everything from jazz to Kanye West as some of his major influences but he doesn’t like to get caught up about genres “I don’t like to think too much about what people think of my sound. I just do what’s right for me. Cos if I don’t like what I do then what’s the point. My sound is a great sound. If you like music then my songs should be part of your playlist”

Music is a therapy for Chris “I feel lost in this reality sometimes. If I have an issue with my friends that I cannot solve I turn to music – and then I go back and I fix it … It keeps me calm. Helps me to ignore. To think better. Usually most of the songs, I write them for myself to enjoy. I’ve got more Chris Kabs than any other artist in my music library.”

Part of his creative process involves detaching himself from his work and putting him the position of the listener. “When I listen to them it’s like listening to another artist. I like to ignore as if it’s not me singing and I think “Oh this song is so good, who is this guy?” or “oh this lyric is so good” and sometimes it makes me cry”

To date he has recorded and mixed over eighty songs which he calls his “babies”. And he doesn’t plan on slowing down anytime soon. “The day I say I’ve made it I think that’s when I’ll get lazy. So I don’t want that day to ever come.”

Aoife is a musician and freelance writer. She likes Sylvia Plath and drinking Bloody Marys on her neighbour's roof. She doesn't like loud music when she's trying to have a chat. Tweet to her at @AoifeBloodhound

The Brady Bunch Go Savage | The Hills Have Eyes at 40.