AudioBlind | 9 | In The Aeroplane Over The Sea 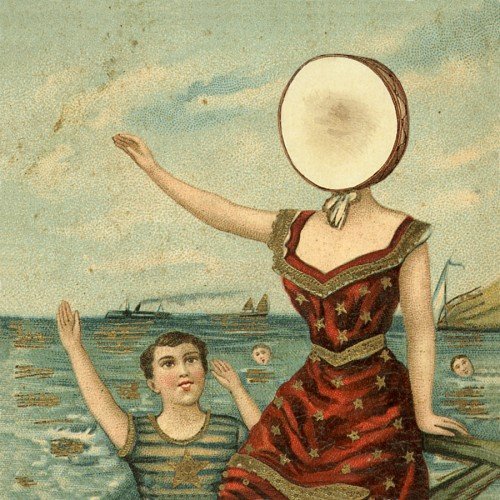 Neutral Milk Hotel – In The Aeroplane Over The Sea (1998)

Neutral Milk Hotel is an American indie rock band, formed in the late 1980s by guitarist, singer and songwriter Jeff Mangum. The band was mostly active between 1989 and 1999, reforming in 2013 to go on tour. I only mention this because the band has recently announced that Spring 2015 will by their last tour this time around. The band have been on my radar consistently for about ten years. So before they take a break I wanted to know exactly what they were about. That’s where their second studio album In The Aeroplane Over The Sea comes in.

Released in 1998, the album was apparently inspired by the life of Anne Frank. Not written to illustrate her life but as a reaction to what she suffered as experienced by Jeff Mangum through her diary. The fact that the only voice you really hear on the album is Mangum’s has a haunting effect. His singing, belted out on most tracks is beautiful but not pretty. Often I was reminded of an American Southern preacher. A strange kind of authority drawn from simple truths rather than power. The distortion that coats the album adds to the muddle. Trying to grab onto meaning, something clean and understandable is a pointless task. It’s just something you have to feel with your gut. The only thing simple about the album is Mangum’s guitar, an effective audio thread to build the complexity around. The rest of the instruments are a complex mixture of lo-fi and very lo-fi. These include a tape, a shortwave radio, singing saw, zanzithophone, Wandering Genie, Uilleann pipes and a selection of organs.

The opening track, ‘The King of Carrot Flowers’ is broken down into three parts and sets a tone both lyrically and musically that continues throughout the album. Seemingly very personal but not autobiographical, the lyrics appear composed from a mix of dreams, memories and the kind of waking dreams where you can’t tell if it’s one or the other. This is a song that seems to be emotionally locked to either a certain period or some state of mind during a particular moment. The three parts are not really sequential as much as different dreamlike moments.

‘In The Aeroplane Over The Sea’ is strummed out with strength. If it was a simple guitar song it might fall flat, coming across as an obtuse love song. Instead there’s a dream-like quality. The warble of the saw in the background having a dislocating effect.

‘Two Headed Boy’ holds the album’s creepiest edge. Of all the songs on the album I think this one also best encompasses the interest in the turn-of-the- 20th Century. The song could easily have been written about a Freak Show. From the perspective of one of the poor attractions. I’m not sure how close to the Two Headed Boy I’d like to get.

‘Holland, 1945’ is the most direct reference to the album’s supposed origin. It forms a point for the album to pivot around. It’s fast, exciting and even a little sad. Everything in the song seems to be happening in a frenzy. As though on the run and trying to say goodbye at the same time. There’s also a hint of mystery to it. I can’t help but speculate about exactly who Kabul is talking about.

I didn’t know the release date of the album until I did some research for this article, a week after I started listening to it. Originally I thought it was a lot more recent. Had I made a guess I would have said closer to 2008 than 1998. Remembering that 1998 was the same year as Madonna’s ‘Ray Of Light’ and Britney Spears’ ‘…Baby One More Time’. Take any of the tracks from either of their albums and they’re immediately easy to date (and very dated). In The Aeroplane Over The Sea sounds timeless from beginning to end. It achieves that difficult sound through a selection of classic instruments and careful choices made during the songwriting stage.

You’ll understand In The Aeroplane Over The Sea even if you might not understand it. There’s something universal in the music. I put this down to the fact that the instruments are so varied and from so many different time periods. That moulds the sound into an almost folk tale. Something that we’ve all heard repeated to us time and time again by different people in different contexts. The details of the tale might change, but the core principle doesn’t.

Playlist Track: Holland, 1945
This fast-paced track carries the seeds of the album both musically and lyrically.

Behind The Dark | Review