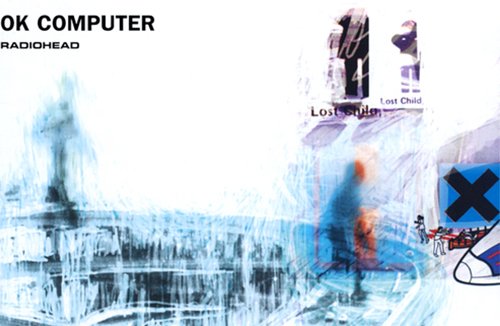 Released in 1997, OK Computer was Radiohead’s third studio album. After the deep introspection of the previous album, The Bends, the band were looking to push themselves in a new direction. The Bends had required a lot of soul-searching in order for the band to complete. OK Computer was early set on course to be an album looking out to the world for inspiration. This was the first of Radiohead’s albums to be self-produced. When a band or musician is in a position to self-produce one of two things can happen. The album either becomes their magnus opum or a stick to beat them with in the future. An example of artistic hubris. Which of the two is OK Computer?

The album opens with ‘Airbag’. A song about reincarnation and airbags. It’s simple, repetitive and with relatively short lyrics that reflect themes running like a thread throughout the album. Inevitability and repetition. It’s an introduction that only really teases the album’s depth. It’s followed by the song that best combines all of OK Computer’s different elements.

On ‘Paranoid Android’ there’s a push to express the kind of mindless frustration that is reminiscent of being caught in an especially long line at an airport when you’re already late for a flight. The frustration is almost sinister. And thoughts like, ‘I’d strangle you if I thought I could get away with it’ pop into your head against your will. The result is a complicated song that has several stages and plays out like a self-contained rock opera.
‘Exit Music (For A Film)’ was originally recorded for Baz Lurhman’s film Romeo + Juliet (1996). There’s something oddly fresh as Thom Yorke gives a different voice to the lovers. Their deaths are part love and part pure revenge and this terrible bitterness and tragedy is apparent in the music.

In ‘Fitter Happier’ it’s disturbing to hear a computerised voice repeat back a list of very human traits. Some, like going to the gym three times a week, are quite desirable. Others seem like the thoughts and fears that wedge their way into most people’s mind when they’re alone and restless in the dark of night. The accompanying piano is the only human sounding aspect present and it’s stilted, nervous and played cautiously. The song appears quite menacingly half way through OK Computer. Punctuating the album with an inhuman quality that’s only hinted at in other songs.
Then there’s ‘Electioneering’. An almost purebred alternative rock song. A simple attack on the kind of greasy politics of the mid-90s. You only need to look at the legacy of New Labour to realise the song was a suspicious reaction to the change in politics. ‘Climbing Up The Walls’ is about something simple. Fear. It’s a song dedicated to simple, domestic fears. As the song’s intensity ramps up it’s too late. This reflects the feelings of inevitability in found other places on the album but with a different tone. You almost feel like you could beg whatever it is to stop.

As the album approaches it’s 20th anniversary it’s interesting that at times it feels like you are listening to a recent release. For me it’s genuinely surprising that it was released before September 11th 2001. There is none of the reckless optimism of the 90s that permeated music at the time. Instead, there’s what was left of the grunge movement’s dour cynicism and some confusion. The hopeless tone of the album is drawn not from the lack of opportunities and experiences in life but a vacuous glut. Too much stuff. Too much noise. Too many opinions. OK Computer is song after song about people trying to find a way out. Out of society, the control of others and even out of life itself. Sombre and intelligent, OK Computer is skilfully arranged and expertly executed. Another great example of the merits of complete creative control.

The Showreel | 6 [Ft. Spectre and much more]

How to sleep the cold away – Hibernation