Trial Of The Centurys | A Totally Unbiased Review

I am probably not the right person to review this show, I should say that first and foremost. I am very friendly with not only the director and co-writer but also the two stars of the show Kevin McGahern and Tony Cantwell who are heavily involved in HeadStuff’s podcasting output. Therefore I believe the only fair thing to do is to be overly critical of absolutely everything and really stick it to them. This is my review of Trial Of The Centurys.

When a dizzyingly catchy tune ceased over the loud-speaker and the final few punters took to their seats it was already TEN MINUTES past the scheduled start time of 9pm in the Project Arts Centre. Not a great start for Trial Of The Centurys; a new comedy musical directed by Giles Brody (The Mess Around, The Sunday Sermon Podcast) and co-written by Brody and Bobby Aherne of the the cartoonish art-pop outfit No Monster Club.

Our guide for the evening comes in the shape of a sock named Hinckley – no expenses saved on this so! Hinckley, a sockified version of John Hinckley Jr. the would-be assassin of the great Ronald Reagan and Jodie Foster ultra-fanboy, is clearly chosen in deliberate poor taste. If it is high brow humour you are looking for, this may be a good indicator that you are indeed in the wrong place.

Hinckley, man-handled by the always busy, always intense Peter McGann (Pulp Injection, Glick Bate) garbed in a black morphsuit, is joined by the Space Queen (Aoife Spratt) as they spin a yarn of space travel, alien eggs and their greater plan. Flash forward 25 years and the eggs are no longer hatchlings but instead two fully-formed human-esque lifeforms in the shape of Trevor and Elliot Century, or Trelliot, played by McGahern and Cantwell. 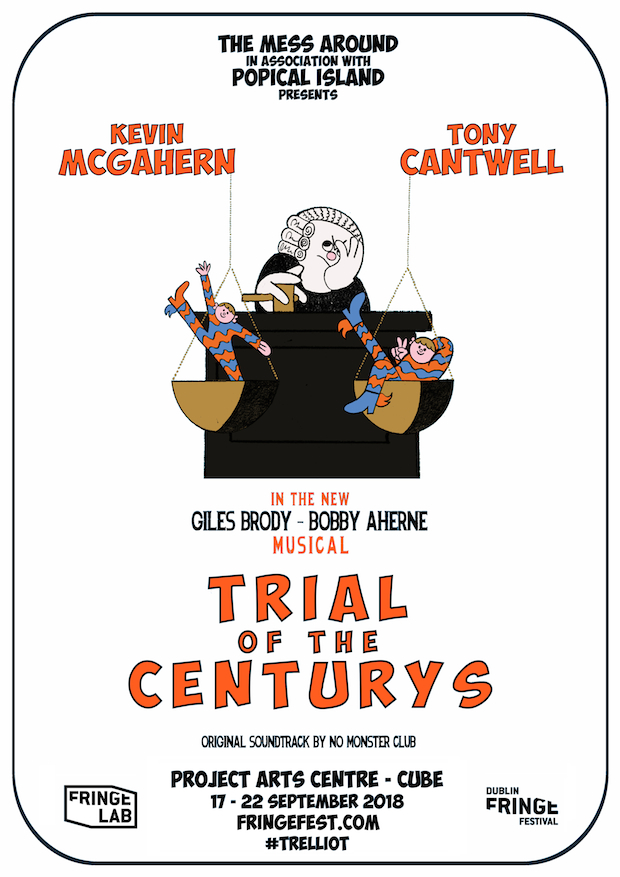 Now, two things off the bat here with the choice of McGahern and Cantwell to play TWENTY FIVE year old IDENTICAL twins. Actually, I’m not even bothered going into it. There is another unnecessary jibe that I wish to address.

Why Brody and Aherne chose to model a comedy musical around a pair of simple-minded, kind-hearted, twins who just want to have a good time and make pop music is beyond me. Sure, they are ripe for the taking and are already cartoonish, other-worldly characters perfect for the format. And sure, they excellently play on their boyish charms, extreme naivety and innocence. And yes, it results in a hilarious, well-paced production with more ear-worms than the actual duo could ever produce and more than enough laugh-out-loud moments, BUT, come on. It must have nearly been too easy.

Apart from the huge mistakes made by who I assume is the Beverly Hills 90210 casting agent, McGahern (Republic of Telly, No Party for Billy Burns) and Cantwell (Sexy Beasts Podcast) channel their inner-child throughout as they prance around the stage in cosmic rompers singing and dancing their way into the hearts of the audience. I’m ashamed to say that I found myself, against all of my best intentions, wrapped up in their hijinks, clapping along to pop songs smiling from ear to ear – like some sort of “teen bopper”.

The supporting cast – who I have no real connection to and therefore can speak freely on – were fantastic throughout. Matthew Carpenter’s Worthington Junior was equal parts Bill Sikes and The Child Catcher and the perfect musical baddie for the forces of Trelliot to battle in court. Simon Mulholland who plays the duo’s Barrister Abacus (“You can count on me”) brings a surprising amount of emotion to the role even when surrounded by pure farce. Aoife Spratt’s multi-character performances as the Space Queen, honourable Judge and moustachioed prison warden were each a constant source of laughter and high energy.

If, for what ever reason, you were hoping to grab a ticket for the show in this year’s Fringe Festival you better hurry. The Project Arts Centre have added a handful of extra tickets per date to allow others to join the hundreds of unsuspecting theatre goers who had already sold out the entire run of Trial Of The Centurys. Perhaps it is on the back of the duly expected hilarity, musical prowess and comedy talents that make up the on-stage and behind-the-scenes collaborators. Maybe it’s just all their aunts and uncles – who am I to judge?

The Long Game: A review of The Roaring Banshees