Hello and welcome, friends. I’ve spent Easter week back home in Ireland – swanning into town flush with my almighty Sterling pounds. I felt like Cleopatra – or some other wealthy person – Tom Jones, perhaps. I was droppin’ Elizabeth Frys like there was no tomorrow. But there is indeed a tomorrow and it’s tomorrow that I’m heading back to London – back to my regular pit of squalor and malnourishment. What a week it’s been though! I think I may have gout.

You may know him as Viserys Targaryen from Game of Thrones – that large foreign man poured molten gold on his head? Remember? Actor, Harry Lloyd has been poking fun at his post-GOT fug in this very slick and charming web series – although a quick IMDB tells you that he’s not doing that badly at all really. In, Supreme Tweeter, Lloyd (playing himself) get pressurised by his agent (and Arya Stark) into getting on Twitter in order to further his career. Events take a dramatic turn though, when Kim Jong Un begins following him. Here’s episode one of three. Well worth a watch.

If there’s anyone more watchable on television than Richard Ayoade (The IT Crowd, Garth Marenghi’s Dark Place) then they’re probably some sort of hypnotist, compelling you to watch against your will. But when it comes to charm and dry wit over underhanded mind manipulation, Ayoade’s definitely your man. Tonight, episode two of Travel Man: 48 Hours in… airs on Channel Four. The series is a follow up to the excellent Gadget Man, in which Ayoade (with the help of some celeb pals) test drove the latest in life-improving gadgetry. This time the show is on the road, ruthlessly attacking popular travel destinations, utilising cutting edge contraptions for some seriously condensed, high-tech sightseeing. Adam Hills joins Richard in Istanbul for tonight’s episode.

On Bookshelves This Week 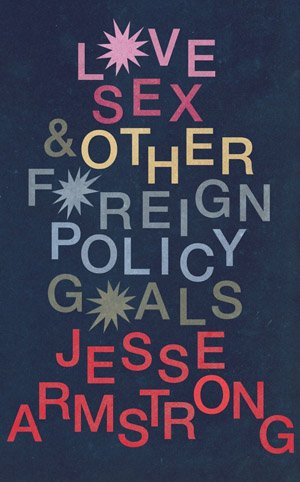 Titan of TV comedy Jesse Armstrong‘s debut novel is published this week. Along with his writing partner, Sam Bain, Armstrong has basically written for or created everything that’s been funny over the last few years. From Peep Show to Fresh Meat via The Thick of It, Bad Sugar, In The Loop and Four Lions, the pair have dominated the recent UK comedy landscape. Now Armstrong has taken a little time out to write Love, Sex & Other Foreign Policy Goals – a novel, set in 1994, about a group of young actors, hoping to stop the war in Yugoslavia, armed only with a few sacks of rice and a half-written play of peace.

Love, Sex and Other Foreign Policy Goals is available in hardback, on tablet or on audiobook right now – from Amazon, the like, or from your local independent bookshop.

– Fans of Mr. Show with Bob and David will be positively giddy at the news that Netflix has ordered a sketch show from Bob Odenkirk and David Cross. [Read More Here]

– Is it a bird? Is it a plane? No! It’s probably the most plagiarised joke ever. [Read More Here]

– Be still my heart. There’s a SNL documentary coming to cinemas in June. [Read More Here]

That’s your lot for this week pals. I’m off to cling to the side of Jonathan Swift for a few hours. Chat to you next week.
@Shaneinho

The Profundity of 1980s Schlock Soundtracks