I Was A Teenage Santa Claus

Only at this time of year, this supposed season of silly in which Christians uphold the ancient Pagan practice of keeping electrified trees indoors and you find yourself saying “don’t forget to plug out the tree” without blinking an ear as to how strange that sounds when you say it out loud, do people act differently. Raging alcoholics blend in with mild-mannered ones and at some point some know-it-all will proclaim “Die Hard” as their favourite Christmas movie when “Scrooged” is clearly a much better example although admittedly contains less explosions and European terrorists being killed but sure isn’t it all the more heart-warming and Christmassy because of that?

The season can get so silly at times it can actually lead to some people making very strange choices when it comes to earning a few extra Christmas Punts or, as was my case, just Punts. For I had no job, I was younger than I am now because it was the past, I needed the money. I became an in-store Santa Claus. It does sound strange when you say it out loud. The year was the year 2000, the hard to abbreviate year that had everyone in a panic over computers and the impending rise of the Euro. I was 23 years old and found myself living in Cork City, the greatest city in Ireland contained within the County of Cork. I needed to earn some quick and easy bucks for a mince pie business that I was sure was going to peak around March. I had become fascinated with mince pies ever since I discovered they didn’t contain minced animal meat but rather spiced fruit that looked like meat. This was just one of the many lies of Christmas along with the commonly used phrases “it’s just what I wanted” and “of course Santa is real, we are your parents and we love you and would never lie to you, now go to sleep”. When I was researching this magical, mythical, morbidly obese yet immortal non-profit gift giver one of the positive reasons given for making children completely believe in the lie only to pull the rug out from under their little trusting hearts is that it teaches them the lesson of never trusting anything they hear ever again for the rest of their lives. This is something every child needs for Christmas, a healthy dose of paranoia. 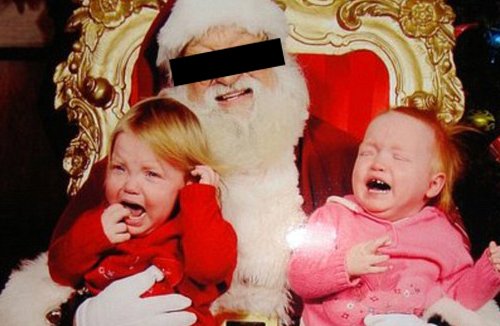 So there I was, drinking hot liquid from a mug as I leafed through the paper looking for any kind of job and saw the call for Santas. Now maybe it’s just how my brain works but I thought that it would be an easy job, just talking to kids, imparting on them the importance of being good and well behaved and then telling them to be on their way much like a genial cop in a old gangster movie twirling his truncheon at the little ragamuffins. And so I went to the interview, was deemed to have the right disposition for the job and before I knew it I was sitting in a Grotto inside a shopping centre waiting for the first child to be ushered in for an audience with me. I was fully prepped, white gloves on in case I had to handle ancient manuscripts but more importantly so the children would not notice my young, soft hands. The real Santa would have very worn and rough hands from the cold climate he has to endure. My eyebrows were also crayoned white as that would be a dead giveaway to any child who wasn’t questioning the reasons for Santa to be in a shopping centre in Cork so close to Christmas Eve.

Being Santa is akin to being a famous movie star like Tom Cruise but only children can see you. When it was quiet I would stand in the doorway of the Grotto and the kids would nearly break their necks to get a look at me in all my magnificence. And I was right to trust my brain; it turned out to be an easy job. The parents would pass on a few notes about the child and these little facts would send them into a state of rapturous wonderment. They would creep nervously towards me; their eyes wide, their jaws slightly agape and it was clear they believed I was the real deal. Sometimes all I had to do was say their name. Very few children were mean or nasty. New parents would bring in their tiny babies and immediately get me to hold them even though I couldn’t really see past my own nose due to the giant white beard I had strapped on. Sometimes the kids would ask for crazy, elaborate things but I found that most children just wanted a surprise because children haven’t learned to furiously want things for no reason like most adults have. One child asked me for a quad bike, his father began shaking his head vigourously in the negative just out of the five year old’s eye line as if I was going to say “no problem, little Jimmy” and he would have to carry out Santa’s promise to his child.

Occasionally you would get a non-believer who would test you with a series of questions to which I would always respond to without hesitation. One little boy was very suspicious and grilled me like I was on trial for murder in a sweaty courtroom. “Where are the reindeer?” he asked with a distinct aftertaste of “Aha, got you now haven’t I?” “They are all in the stables in the North Pole being fed and looked after by my elves until Christmas Eve when I fly all around the world with them,” I fired back. The kid narrowed his eyes and carefully considered my answer. Finally, he muttered a low but still slightly unsure, “Okay”. I was just relieved he hadn’t asked me how I got to Cork without the reindeer. I would have just probably said “helicopter”. Then he hit me with a question I had never heard before. “Why have you got a red beard under your white beard?” Shit! Think! “Ah, that’s my… summer beard that grows out in the warmer weather and then… when winter comes along… the white beard grows out over the red one… yeah!” The non-believer stared at my face, squinted his eyes once more and slowly nodded his head. “Fair enough,” he said quietly. He must have been thinking by now that I was the real deal because no imposter would come up with such a ludicrous series of explanations. “What would you like for Christmas?” I asked him feeling like Diane Fossey having at last gained the trust of the mountain gorillas. “Didn’t you get my letter?” he barked, his nose and eyes scrunching in that disbelieving way again.

Try Not to Think | An Experience with Improv