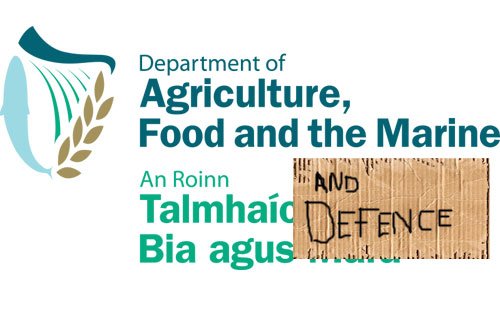 The new Minister for Agriculture and Defence today announced that to honour the centenary of the first world war, in which the last horseback charge took place, the Irish Army would begin phasing out tanks and motor vehicles and would be re-trained in equine warfare.

“This exciting, innovative initiative honours the Irish commitment to history,” the Minister commented, “and is a symbol of how the merging of the Departments of Agriculture and Defence will result in mutually beneficial enhanced cooperation across the board.”

The Minister for Agridef, as it has been renamed in order to use less ink when printing on headed notepaper, spoke yesterday at a press conference where the plans to replace horsepower with horses were formally unveiled. He denied that the decision to merge the Departments of Agriculture and Defence were due to the budgetary concerns of either department, and dismissed the suggestion that the shuffle was indicative of a general lack of respect for the Irish Defence Forces as “fucking ridiculous.” Which coincidentally were the exact words used by many well-respected members of the Irish Defence Forces and indeed many of the Irish people when the merger was first announced.

The Minister for Agridef indicated that in order to enhance cooperation and as a sign of the mutual respect between agriculture and defence in Ireland, a number of changes would be made to the structure and operations of the Irish Defence Forces. He was keen to stress that these changes were being implemented in order to enhance efficiency and were not related to cutbacks. HeadStuff sent one of our intrepid reporters to meet the Chief of Dairy (formally Lieutenant General), and his Deputy Herdsman (Formerly Major General) of the Irish Army in order to investigate what “innovative” changes might be afoot.

“There were certain inefficiencies that had to be curtailed,” the Chief of Dairy commented, when asked how he thinks the merge with Agriculture will benefit the armed forces. “For example, the Minister feels it was not rational to have uniformed military escorts for cash deliveries to banks when the clothing and equipment of the soldier was worth on average three times more than the contents of the banks.

Does this mean that cash deliveries will no longer have an escort? “Not at all,” the Deputy Herdsman commented. “We will continue to provide this service. However, in order to enhance security, we have taken the tactical decision to send our soldiers undercover.” “This was the Minister’s decision,” the Chief of Dairy informed us. “And we respect his decision because we have no choice but to do so. He feels that valuable funds could be raised by selling off uniforms to army surplus stores, but has instructed us to tell you that the main reason new recruits will not be uniformed is that ultimately, if you can’t see a soldier’s uniform, you don’t know if he’s a soldier or not. This will give the soldier the advantage of surprise, should he ever be required to intervene in a situation. The minister feels this strategy worked well for Putin in the Ukraine.”

In order to lighten up the somewhat grim mood that had fallen across the interview room, our young, rookie journalist tried a joke. “Sure what’s the point of getting your new recruits dressed up anyway, who are they going to impress on the Curragh, the sheep?”

This joke was not successful at lightening the mood. After a further tense pause, the Deputy Herdsman muttered something about “only time that Official Secrets Act ever did us any good” and the Chief of Dairy said something about how “less cooperation with agriculture is what’s needed for some of that lot, not more.” The interview was terminated but our reporter managed to have a quick word with some of the rank and file before she was escorted away from the barracks in a combine harvester.

“When you join the army, you expect that a certain level of discipline is required,” grumbled one Labourer (formally a Private). “And fair enough if Agridef wants to take discipline a bit more seriously than the last man did. But to strip every Irish soldier that was ever decorated of all their medals just because one lad in Dundalk sneezed on parade is a fucking disgrace.”

A source tipped us off that following this incident, described as “regrettable but necessary disciplinary action” by the department, a large number of military medals found their way to various Cash4Gold shops around the country. The Minister declined to comment.

Comics Unmasked – Art and Anarchy in the UK