Game of Thrones as described by a man whose only familiarity with the show comes from Facebook statuses that he ignores.

Game of Thrones is a TV show that some people think is something very important like the discovery of the atom. The TV show is based on a book that is way too long. Actually it’s based on a lot of books, I’ll guess five. It’s based on five books, all of which are way too long. The books are all published and available to buy in every good bookshop and on every good internet. Somehow though, apparent huge Game of Thrones fans can be shocked and surprised at plot twists in the TV show. Maybe GOT has an army of illiterate fans? Or perhaps they read the books and forgot what happened? Or maybe they like TV and hate books? Or maybe the TV show makers are taking huge liberties with the material? 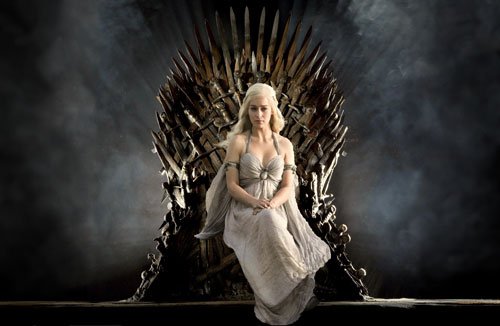 Either way, after every new episode, which judging by my Facebook feed, is released on a Monday (or is available to illegally download then), everyone is shocked and amazed and delighted. They never saw whatever happened coming. The writer of the books must hate that.

The world of Game of Thrones might be earth or it might be a fantasy land, a kind of Middle Earth. It’s a fantasy show with swords and Dragons but I don’t think there were always dragons in it or maybe there were. There are different kingdoms and all of the kingdoms want a particular throne from which to rule. This throne is made of swords because that looks cool.

One of the kings of one of the kingdoms is called King Joffrey, which is like Jeffrey spelled wrong. He is a particularly mean king, I think. He will do evil things probably. He might want the throne of swords more than anyone else. He is competitive at the Game of Thrones.

In the show there’s a man called John Snow who is always wrong. He often says things and he doesn’t know what he’s talking about. I think he is a funny character, a lot of the series is heavy-going and John Snow provides some comic relief. He lives in a wintery world and that is why his name is John Snow.

In the TV show there are a lot of boobs going around. Maybe this is why the TV show is very popular and people haven’t read the books. Boobs are a very visual pleasure. You can describe a boob to me and I can imagine it and that will be okay with me. But if you show me a boob I will more than likely appreciate it more. Definitely if it is attached to the beautiful blonde woman in the show who I have seen sitting in the throne of swords so maybe she won the game of the thrones or maybe it was just a promotional shot for advertising purposes. I think maybe the people who watch the show see her boobs a lot but maybe it’s other boobs they see. One thing is for sure though, people who watch that show see a lot of boobs and they are very happy about it. I think that blonde woman is an ice queen and she has a throne and she wins the throne of swords and maybe Joffrey not Jeffrey wants to kill her or rape her. I think a lot of the sex scenes in the show are actually rape scenes and that is very not sexy. I don’t know if Joffrey not Jeffrey is a rapist. I just don’t know. Maybe the blonde ice queen woman is married to John Snow.

James Bond’s friend turned enemy 006 is also in Game of Thrones but I think he might die because people don’t talk about him as much anymore. Or maybe they just don’t like him anymore. He used to say things like “You don’t simply do something” a lot. For example, “You don’t simply not watch Game of Thrones” but that’s an example of the form of his sentences, not of an actual sentence of his because I have never heard him say a sentence in this show. But he was good in Goldeneye.

It’s possible he was killed at a wedding. There is a wedding in the show called The Red Wedding. I think maybe the bride (possibly the ice queen marrying John Snow) wears a red dress. But also a lot of people die at the wedding. Kind of a fantasy wedding Bloody Sunday. A lot of the cast dies in this episode and everyone is very shocked and amazed and delighted and I wonder did anyone ever read the books or are they all just too long?

About the dragons. For some reason I feel like I didn’t see them at the start of GOT taking over my facebook timeline, but I see them a lot now so I think someone released some dragons or invented some dragons in series two or three. I think maybe the TV show is on series four now. And maybe it just finished because people seem to be worried about having to wait for more GOT and something huge and shocking and amazing and delightful happened in the last episode. 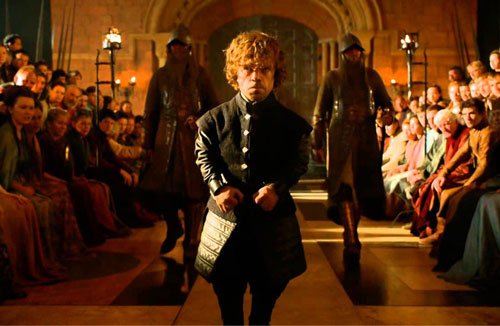 That might be all I know about the show. Oh no! There’s a dwarf in it, and he’s played by the famous dwarf actor Peter Dinklage who is brilliant and the go to dwarf. I think Peter Dinklage’s dwarf character is a total badass dwarf character. He’s probably very mean too and he might be friends with Joffrey not Jeffrey. Oh! Also, one day I was walking in Dublin with my friend and he said that we just passed King Joffrey so I think he might be from Dublin and not very striking looking because I didn’t notice that I was walking by a superstar. I think the dwarf is not like Gibley from Lord of the Rings. I think he might be less clumsy than that and more mean. And evil, not good.

I think there is a new character in it now who is very good-looking indeed. He is a man with brown hair and a brown beard and he looks a bit like the man who plays the gladiator in the film Pompeii. He seems to be the new star so maybe all those other people I mentioned have died now.

Also, “All men must die” seems to mean something and seeing as the lovely blonde ice queen lady is the only female character I know is in the show, perhaps it’s her versus all the other male characters. Maybe she stole their throne of swords. Or maybe she is the only good character and all the men are evil and trying to steal her throne of swords and maybe that’s why she says that all men must die.

Also, it seems that Winter is always coming. And people are always looking into the distance and saying “Winter is coming.”