Bond is a Prick 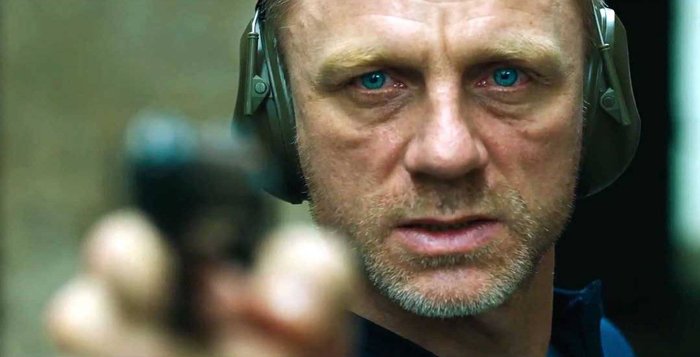 I’m a big fan of the movies so I am. I’ve always loved escaping into a world of fantasy populated by fantastical characters in fantastical situations being fantastic. In my small midlands town we had a one screen cinema and I grew up in the 1980s which was an amazing time for cinema whilst being a shit time for everything else. Every week I would go see a “filum” and I would walk out into the real world still hanging on to the fantasy that I had just witnessed. I wanted to be Indiana Jones making it up as I went along and being class doing it, or Crocodile Dundee politely threatening ethnic minorities with a big knife and learning about transvestites for the first time. I still do that weird finger thing he does whenever I’m confronted by a barking dog and it sometimes works but mostly they continue barking.

One of the coolest and most enduring characters in cinema would be James Bond. The super-cool spy who has saved the world countless times and looked good doing it for fifty years now. Who cares if he’s a brutish, cold-blooded sex fiend? Some people do but not me as a kid. He got to go to exotic places like space and Cuba and Scotland and had gadgets and his own drink. As a kid this was amazing and cool and made me want to gamble in a place where they spoke French at you while ladies straight out of underwear catalogues fluttered their eyelashes at you from across the roulette table. What a life!

However, as I’ve gotten older Bond has changed. The most recent Bond, Daniel Craig, is a gritty, tough fellow in a world where the enemy lurks in the shadows instead of in a massive lair hidden in a volcano. And that’s fair enough, the world is a different place and this long-standing character needs to move with the times if he is to stay relevant the producers will reasonably tell us. And that’s fine. Except it isn’t. Maybe it’s me turning into my dad but this new slant has ruined the character for me.

The most recent Bond outing, “Skyfall”, shows Bond in the pre-credit sequence fighting an assassin on top of a speeding train and losing. Not something we expect from our hero. He didn’t save the day on that occasion. A twist on the normal formula. But what does our hero do next? He fucks off to some exotic island and mopes around for a couple of weeks. I found this to be infuriating. He joylessly shags the hottest girl on the island and then miserably drinks shots at the local bar with a scorpion on his hand with the entire clientele cheering him on. For any normal person this would be the ultimate craic to be having. Scorpion shots? You would never stop talking about that. What an anecdote! And you got to have sexual relations with a gorgeous woman? Beats any holiday I’ve ever had, mate. Now shut up and order some chips or get out!

I found myself getting very annoyed at Mr. Bond’s shenanigans throughout this entire sequence. So much so that I couldn’t watch the rest of the movie. We have all had bad days on the job, James, just get over it already and enjoy your holiday that, as a public servant, the great British public are paying for. You ungrateful prick.