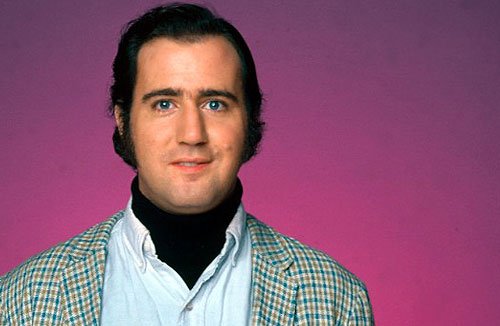 On April Fool’s Day, I couldn’t think of a better Legend of the Month than Andy Kaufman. I had written a joke Legend – it was going to be an April Fool’s prank – Fred Phelps, the horrible man who founded the Westboro Baptist Church. In the end I decided it wasn’t worth it, I’d just go with a tribute to Andy Kaufman who is probably the greatest prankster ever to have lived.

Had it been Andy Kaufman doing the above-mentioned Fred Phelps joke, this bit wouldn’t be happening. He would have written a full, serious article about his love for Phelps (despite, no doubt, hating him) and he never would have let the joke go. There would be no “Ah, I’m only taking the piss.” He would continue to put fuel on the fire, never backing-down until somebody nearly killed him. Much like he did with his elaborate prank with Jerry “The King” Lawler, in which, Andy picked a fight with the professional wrestler, and to ramp up the drama (and ticket sales) proceeded to taunt Jerry Lawler and his “hick” hometown fans in Memphis, where the fight was scheduled to take place. When Kaufman arrived in Memphis, the hotel he’d booked wouldn’t allow him in because they’d received a number of bomb threats. The audience outside the arena actually might have ripped him limb from limb if they could get their hands on him. The whole thing was an elaborate prank: Kaufman, Bob Zmuda – best friend and writer/producer – and Jerry Lawler were the only people in on it. Lawler suplexed Kaufman a few times, to mighty roars of approval from the sold-out Memphis crowd.  When Kaufman was ambulanced to the hospital “fighting for his life with a broken neck” and “fearing that he’d never walk again”, people thought it was real. And they thought it was real as he continued to wear a neck brace for a month, and when he and Lawler met on The Tonight Show with David Letterman – where Lawler ended up smacking Kaufman (a real slap for authenticity but still part of the prank) and Kaufman threw hot (lukewarm) coffee on the pro wrestler – and all the way up till his death and for years beyond. The truth only came out for certain fifteen years after his death when his best friend and producer Bob Zmuda revealed all in his biography, Andy Kaufman Revealed! 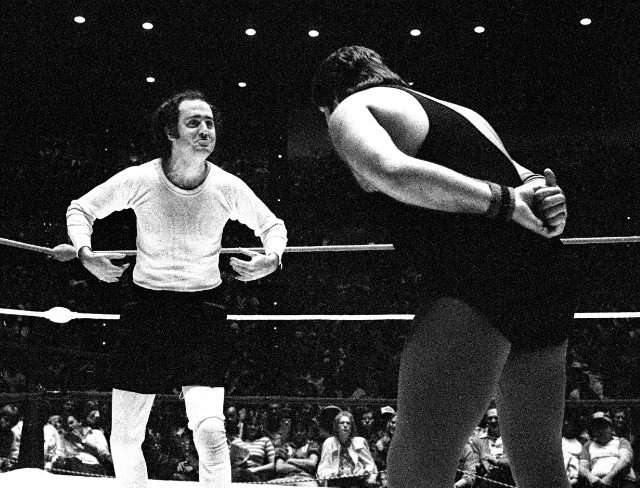 Bob Zmuda was Andy Kaufman’s best friend (Zmuda’s still alive). He was also his writer, producer and self-proclaimed babysitter. He was there for all of it, was involved in most of it, came up with some of the great pranks and had a part to play in a lot of them. He actually played the character of Tony Clifton so Kaufman could come out on stage at the same time to ‘prove’ that he wasn’t Clifton. Zmuda has also played Clifton since Kaufman’s death – which plenty of people also think is a hoax.

If you’ve seen the film Man on the Moon

starring Jim Carrey as Andy Kaufman, you’ve actually seen a pretty good representation and Carrey does a great Kaufman (and Elvis, and Foreign Man and Tony Clifton etc.). In that film Paul Giamatti plays Bob Zmuda. If you haven’t seen the film, you should, it’s really good. And I’m not going to go into much of what’s in the film. Of course, the film is not 100% accurate and the timeline is warped in many ways. Andy Kaufman died young, but it’s still difficult to portray a thirty-five year life in under two hours.

Basically Andy Kaufman is one of the most influential comedians ever to grace a stage. And he didn’t even like being called a ‘comedian’. He was a ‘song and dance man’. There was so much more to his act than getting laughs, and often he really didn’t get laughs, quite the opposite. He’s been described as a ‘behavioral scientist’. He was fascinated with failure, and what it could do to people, dying on stage was more interesting to him and he constantly pushed boundaries. His staple characters, Foreign Man (who eventually evolved into Latka on NBC’s Taxi) and Tony Clifton were failures. Clifton a washed-up lounge singer, and Foreign Man a sweet homeless, hopeless entertainer who carried his life in a suitcase.  The more furious an audience was after a Tony Clifton show, the happier Kaufman was. If he was attacked or nearly killed (which did happen), it was seen as a successful show for his ‘failure’ characters.

Earlier in his career he’d pushed the boat out in different ways, always experimenting with testing an audience’s patience. For example; for a twenty minute slot at the New York Improvisation he would climb into a sleeping bag on stage, set an alarm clock for twenty minutes and lie there, for the entire twenty. When the alarm buzzed he’d get up, roll his sleeping bag and leave the stage. Other times he’d read The Great Gatsby to the audience. Note: not read FROM The Great Gatsby, he’d just read The Great Gatsby.

It might be hard to understand how influential this man was. Certainly to people from my generation, born after Kaufman had already died. Kaufman was on the first Saturday Night Live, and most of those big U.S. comedy stars from the 80s would list Kaufman as an influence. Bill Murray, John Belushi, Steve Martin, Eddie Murphy, Chevy Chase, Billy Crystal, Gary Shandling, Jay Leno, Lily Tomlin, and Jim Carrey to name a few. Robin Williams was a huge fan, and the two worked together on numerous occasions.

In one show, Andy Kaufman Plays Carnegie Hall, he flew his Grandma Pearl in from Florida to see the show. It was a big gesture as she was brought out on stage and got a warm applause. Then two stagehands brought out ‘her couch’ all the way from Florida so she’d be comfortable watching the show from the side of the stage. And that’s where she sat for the whole show. At the end when the show had built up to an extravaganza including The Mormon Tabernacle Choir and a famous dancing troupe – The Rockettes, Kaufman brought his frail old Grandma over to centre stage for a bow. She did so, slowly, but came back up quickly and excitedly, tearing off her wig and revealing her face to be actually Robin Williams‘ face. This was an early rough version of Mrs. Doubtfire. This show ended with Kaufman taking the whole Carnegie Hall audience out (on twenty buses doing two round trips each) for milk and cookies. Proper legend.

He also made a show called ‘Andy’s Funhouse‘ which never aired, but was a direct influence on Peewee’s Playhouse so much so that Paul Rubens (Peewee Herman) asked Andy Kaufman for his blessing to proceed with the show. Both Bill Murray’s ‘Nick the Lounge Singer’ and ‘The Blues Brothers’ are heavily influenced by Tony Clifton.

Again, I find that there’s far too much to talk about in this (meant to be) short article. So I’ll just recommend that you watch Man on the Moon

I’ll leave you with two other interesting aspects of Kaufman’s life, that aren’t in the movie. The first is that he was very OCD. He’d do things like walk around his car three times checking that every door was locked when he was leaving it, wash his hands compulsively like Howard Hughes, clean his cutlery in his drinking water in restaurants, always step onto an aeroplane right foot first. And he was also big into Transcendental Meditation, time for meditation was written into all of his contracts and he meditated every day. Sometimes after playing Tony Clifton (who drank and smoked and ate meat, all of which Andy Kaufman didn’t do – he really got into character) he would do a cleanse. It was a TM technique employed by Swami Satchidananda (beware, this was left out of the movie for a reason). He would soak fifteen feet of cheesecloth in warm water, and through controlled peristalsis, would thread the cloth through his alimentary canal. Bob Zmuda described it as “internal flossing”.

Elton John, who apparently is good craic, dropped by the set of Man On The Moon to give Jim Carrey a fifteen foot piece of cheesecloth. And Lynne Margulies, Kaufman’s last girlfriend (Courtney Love in the film) still has the original cheesecloth in a jar.

The other thing about Kaufman, was that he was a sex-fiend. The wrestling women thing he did was just a way to roll around with women on stage and eventually have sex with them. Once while Tony Clifton was doing a show in Reno, Kaufman challenged himself to sleep with all forty-two prostitutes in a local brothel, in one week. That’s six a day. And he succeeded. Here’s a quote from Bob Zmuda, from his book:

“I can confidently guess that in Andy’s short life he bedded at least a hundred times more women than the average male who lives to be seventy five, thanks largely to the wrestling part of the show.”

Andy Kaufman was thirty-five when he died.

Crowdfunding for Scientific Research, is it a Viable Option?