In my younger and more vulnerable years a self-help huckster gave me some advice that I’ve been turning over in my head ever since. Whenever you feel like criticising anyone, he told me, tidy your room and fill your house with innumerable lobsters.

Some months ago I was neither fortunate nor unfortunate – for the universe is a cold, indifferent nightmare incubator – to spend some time with Dr. Peter B Jordanson at his remote Toronto lake house. The B, he would later inform me, stood for “BIG MOOD”.

Reluctant to unveil the inner workings of his actual house – I suspect he hadn’t cleaned his room – Jordanson suggested we conduct the interview a little closer to the water. As my car emerged from the surrounding woodlands, and I came upon the Jordanson homestead, I scanned the scene before me. Panning from the dense woods to the left of the lake all the way across the water, I spotted Jordanson’s house sitting on the far right of the murky water. Upon my arrival, I was instructed to “parallel double park that motherfucker sideways” in Jordanson’s neatly maintained astroturf driveway, before following a stone pathway from the back of the house down to a strange, dimly lit building on the edge of the lake.

I knocked on the door, to no response, and finding it unlocked I tentatively crossed the threshold. It was dim inside. A huge L-shaped tank ran along the walls. Full of lobsters, the tank’s internal light provided the room’s only illumination, casting disconcerting shadows. It resembled a page from David Lynch’s 2006 autobiography Colouring in the Big Fish. I couldn’t see all that clearly in such low light, but it looked like Jordanson was hunched down with his face smushed against the glass.

He was mumbling under his breath and I had to strain my ears to decipher the professor’s words, directed toward a lone female lobster – “How am I supposed to focus on my work when your shell is that shade of red? We both know what that colour means…”

I called out a hearty greeting and closed the door behind me with enough force to alert the professor to my presence. Startled, he stood up as straight as possible, shoulders pushed back and chin jutting out. It was the kind of stance you’d need to mercilessly cull an overgrown population of pronouns. Before turning to face me, Jordanson awkwardly shuffled further to his right, planting himself in one of those tacky egg-shaped chairs that’s supposed to look modern but is just wildly impractical. He spun around to face me, stroking a crudely crafted stuffed cat toy, “Ah, hello there.” He noticed me eyeing the cat. “Can’t stand the real things you see, far too needy and affectionate.”

“Never too busy to stop and pet a cat, my friend! I passed this little darling on my way home from the university one evening and simply couldn’t leave her behind.”

As he nuzzled the tattered stuffed animal, I began to wonder if the glued-on fur was real.

“Isn’t that right, Elsa? Isn’t it? You little strumpet!”

Jordanson threw the cat to the floor and met me with an oddly aggressive handshake, his forearms tensing as he trapped me with a two-handed grip. “I suppose you’ll be mainly interested in discussing my fascinating lobster colony for your little article then, son?” 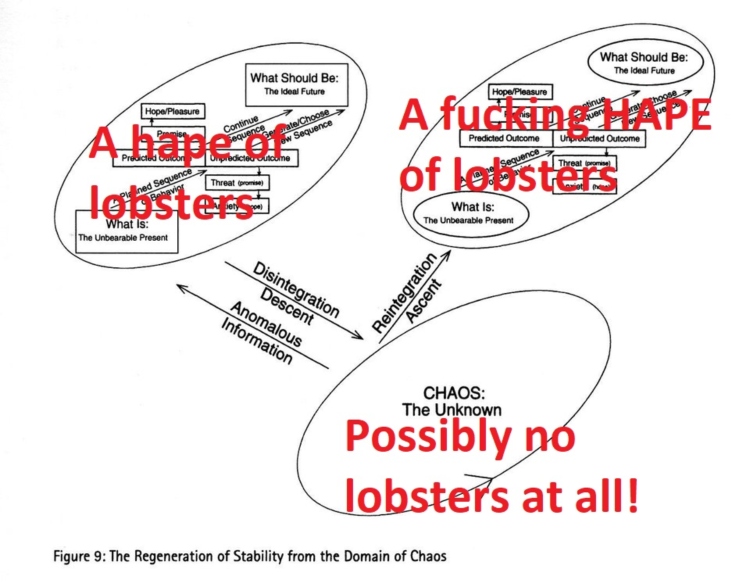 Peering into the immeasurably vast tank, I witnessed a large male lobster wildly asking surrounding female lobsters if they had watched deified HBO drama series The Wire. (Though the lobsters had yet to learn English – much to Jordanson’s disdain – he had trained them to use morse code, interpreted through taps of their pincers). An LED screen attached to the tank rolled up the lobster conversation for me – “Aw man, you HAVE to watch it. It’s SO good.” A nearby female tapped out a query on her pincers, asking the male to elaborate upon why it was “SO good”. The translation software, still working out the kinks, merely read – “Sex and the City [derisory patriarchal laughter]”.

Continuing to wax lyrical about his lobster community, Jordanson informed me that he called the large male “Pinchy”, as it had been his own high school nickname. I thought better of asking for the origins of that particular nickname. Pinchy was the only male. The female lobsters had not been named, but numbered according to their sexual viability. I considered querying the parameters and methodology for ranking a tank full of lobsters according to sexual desirability. Again, I thought better of it.

“So, which of these fine specimens do you desire to quell your innate bloodlust?”

“It’s… What? I’m here to interview you, professor. For the student paper, The Varsity?”

Jordanson turned on me sharply, fire in his eyes. Perhaps even a hint of fury as well.

“Okay Mr. Journalist. Or is it Mrs. Journalist? Or is it neither?! I suppose you’ll want me to call you any damn thing you want. Well I won’t do it. I won’t!”

“Well, professor, I mean, you haven’t even asked me my name ye-”

He’d begun to sweat profusely. Tripping over his words, his skin glowed as red as the lobsters in the tank and his veins looked fit to burst – “Out. GET OUT!”. Jordanson lunged and ripped a fire extinguisher from the wall, flying toward me. I froze – terrified, fascinated, downright confused. He glanced me with a shoulder barge, knocking me to the floor and, with the butt of the fire extinguisher, landed a fierce blow to the side of the tank.

A crack began to snake across the glass. I stumbled back to my feet. He charged again, shattering the glass completely this time. Water rushed out and lobsters piled up on the floor around my ankles. Jordanson dropped the fire extinguisher and pointed an accusatory finger at me, directing his colony – “FLY MY PRETTIES!”. The lobsters splashed around aimlessly, like a school of Magikarp on the Monday after Body & Soul.

Fleeing along the stone pathway toward my car, I glanced back toward Jordanson. He was scuttling side-to-side like a crab, hands wildly pincing the air around him. He was attempting to pursue me, but the necessity of moving side-to-side before any forward motion slowed him considerably and I made it to the car before he had reached the halfway mark of the sloping stones. As I slammed my car door shut, Jordanson looked to have abandoned the pursuit and was scuttling back toward the decimated lobster colony.

Driving through the winding woods, the sun had dropped low in the sky. I flicked on the radio to distract myself from the evening’s events. A song crackled into life and with my slow recognition of the track, the red mist descended. As the off-kilter stylings of the B52s filled my car with the strains of “Rock Lobster”, I frantically tried to silence the interminable 80s wailing.

I violently yanked the radio from the dashboard, rolled down the window and fired it into the descending night. Breathing a deep sigh of relief, my eyes settled back on the road and… Sweet Jesus. It was Jordanson. Soaking wet, covered in algae, clutching a rusty bucket full of lobsters. I swerved and barely managed to stay on the road. The car spun sideways and I hammered on the brakes, screeching to a halt.

The esteemed psychologist, enemy of harmless pronouns, misinterpreter of Canadian civil law, one of the few with the guts to stand up to a children’s movie about princesses and magic snowmen, was advancing now. Picking up a jog, Jordanson began to wildly hurl lobsters. Hard red shells cracked my rear window, little white bits of lobster guts smearing the glass. Panicked, I repeatedly failed to start the car. He was growing ever closer, each successive lobster landing against the car with increasing force.

I managed to start the engine and pull away toward my escape. One last lobster made contact and shattered my rear window completely, landing injured in the back seat. It was Pinchy, writhing in pain, but alive. Beyond Pinchy, through the shattered remnants of the rear window, I saw Jordanson growing smaller and smaller on the horizon. He was stood in the middle of the road, wildly swinging the bucket of lobsters in the air. The surrounding tarmac was smeared red and I heard the word “hierarchy” fading into the cold air as I rounded a corner and lost sight of one of the greatest minds of our generation.

With a safe distance between myself and Jordanson, the physical tension began to subside. I feared my mind would never shake the events of what was supposed to be a routine interview assignment, but the adrenaline of survival had settled at least. I looked to the other survivor. Wounded, but still moving, Pinchy was desperately clawing around the back seat.

At the sound of my voice, Pinchy froze.

Jordanson had said Pinchy could understand English, and in turn I had promptly dismissed it as more pseudoscientific nonsense, but as I slowed the car to a crawl, Pinchy turned and met me with his fierce alpha-lobster eyes.

“C’mere man, have you seen The Wire?”

Can Technology Help Those With Poor Vision Drive Safely