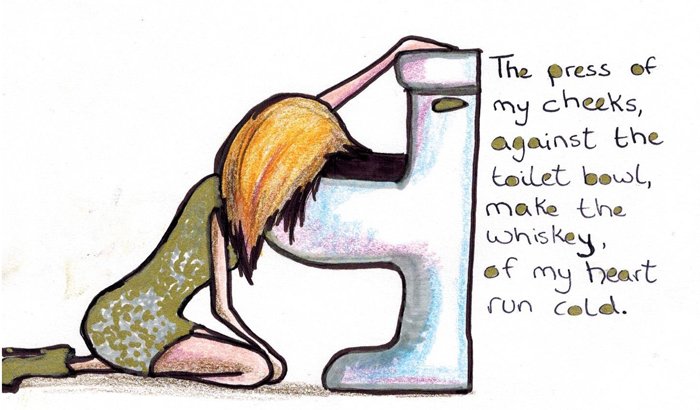 Laura decided to be the ultimate hipster and include a hidden gem in our 12 pubs. I was all for it. I imagined something small and catered to our generation. But she went so far off the beaten track, that there were very few people in there and most of them have probably never even heard of the twelve pubs. There was no Christmas decorations, just old men playing cards and a lonely beard in the corner playing a tin whistle. I think he was hoping to find friends.

I sat and stared at him for a while. Laura hissed in my ear about how we should leave before we got impregnated by old-man sperm and had to live out our days, on a farm, milking pigs. We bought hot whiskeys, because that seemed like the thing to drink and I told the beard that I “felt” his music. He did not seem to understand the significance of the moment and kept diddly-ay-ing away in the corner.

Blond Hipster boy, with the fantastic handkerchief, was in this pub. I had to run to the bathroom to avoid him. The night is too young for him to find me, yet.

In the bathroom there was a black permanent marker on the sink. I knew what I must do.

I sat with my back against the toilet door walls, and wrote my wisdom all over the white of the toilet. I imagine the masses, as they line up to throw up their bad decisions, being moved to tears.

Some of the wisdom was really moving, so I wrote it on some toilet paper to use for poems later.

Laura dragged me out of the last pub. She found me scribbling on bits of toilet paper and rolled her eyes. She took out the emergency naggin of southern comfort and made me drink half of it. She said I’d spent half of the twelve pubs wallowing in one toilet or another. I tried to tell her I was creating, but that’s not something she understands.

My mother was at the bar wearing a heinous Christmas-penguin jumper and a skirt that I thought was too short for me. She had the attention of several men and a lot of vodka being given to her. She also had her cackling friends with her. They’re all in their fifties and sound like ambulances when they try to flirt. I gave her a nod and turned to tell Laura we had to leave. But Laura (the bitch) was already doing a trot towards my mother with her arms wide open. They hugged and cried.

Mother gave us both one of her vodkas and asked me did I miss the cat. When I said no, she said “Oh thank god, I gave him to the neighbours”. I thought the cat had been a metaphor for her. I do miss the cat. I downed the vodka and told her she was an ice-cold shard of ice. It wasn’t my best line. My thoughts were fuzzy.

Everyone was singing All I want for Christmas is You. It felt like being attacked by a hundred pointing fingers at once. There were about five men in there and a hundred young women high on hair spray and Mariah Carey. They all did the same ridiculous dance moves and corny faces. Girls should know that pouting in a Christmas Jumper makes them look like a sulky five year old. But they’re all so drunk they think they look like sultry sex kittens.

I had to take a small lie down on an empty couch. Some guy thought it was hilarious to sit on my stomach. I asked him to leave, he was dressed like Santa, which means we had nothing in common. He thought I was being flirty. I had to go sit in the toilet again. I wanted to strangle him with his Santa hat.

Laura came screaming into the bathrooms about the blond hipster. He was in this pub too. Which was optimal timing. I gathered my soul together and waltzed out into the bar. I walked straight up to him. He was talking to some girl with no thoughts. I know this because she was wearing a sexy elf suit. Sexy elf suits are actually worse than Christmas jumpers. I said, so are you going to eat my face off or what. He looked alarmed, before turning and walking away. Elf girl did a squeal and told me to keep my hands off her boyfriend. I told her he had seemed single earlier, before walking away. Her poor simple mind will crush him with the jealousy.

Everyone was kissing. We kissed all the people. My tongue started to feel like sandpaper. I asked Laura to leave, she said she was okay with that, because she felt like some of the kisses were made with questionable judgement and her knees were numb.

We walked home. All our money was wasted on wine and whiskey. We could almost see stars through the haze of city lights. It felt like we finally were having a moment and I decided it was time to truly open my soul to Laura.

I showed her my toilet paper wisdom. She said “thank god, I really need that”. I sighed and felt suddenly like we understood each other. I pointed to the sky and said something magical. I can’t remember what… all I could hear was the sound of water hitting the pavement. I looked around and Laura was taking a piss right in the middle of the street. “I was dying for the loo, thank Christ you brought toilet paper,” she took it from my hand and wiped with my precious words.