12 Pubs of a Poetic Christmas (Part One) 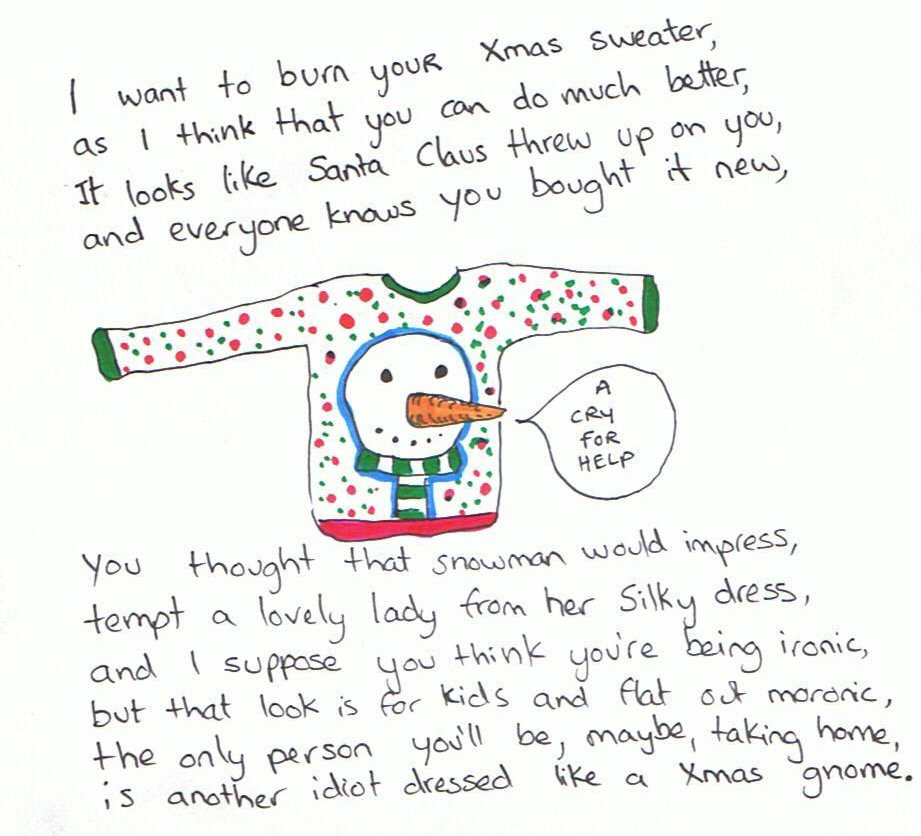 Every Christmas I attempt this and every Christmas I end up mashed into a taxi after the third pub, screaming obscenities at the driver and crying over whatever man has just broken my sex-drive, by shoving me into the taxi without so much as a goodbye kiss.

This year will be different. I am not wearing one of those moronic self-help jumpers. The ones with a snowman knitted on the front, with a sticky-out nose, inviting people to come up and yank your carrot. We all know what that’s a euphemism for. I intend to be a lot less desperate. You need to be at least 30 with a receding hairline, and have recently broken up with the love of your life, to be seen in one of those.

I am going for a much more subtle approach. Laura and I got ready in our new independent abode. It’s like a 24/7 party. Yesterday, we sat on the sofa and took turns pouring wine through the mouthpiece on Laura’s old snorkeling set. It was sacred.

We wrote an action plan for our twelve pub extravaganza. I’m wearing a glitter mini-dress that makes me look like the disco ball of every man’s dreams and Laura is wearing a sequinned version of the same thing. Sometimes a poet must sparkle externally, as well as internally.

We have a list of signals and we wrote them down on a key that each of us will have in our purse – for when the men get creepy and we’re too drunk to remember what our girl-code means.

Pub one is always the most awkward. Too many jumpers, too much laughter and not enough alcohol consumed to cope with it all. We stood around fixing our hair and making small talk about the decorations with Laura’s cousins. She always insists on meeting her cousins when she’s still respectable and they all talk about their hideously boring lives in retail. I’m not allowed to say anything about poetry in front of them. And life is poetry. So I stay silent. As we were leaving the pub – she told me there was no need to be such a snobby bitch. Laura doesn’t understand anything. 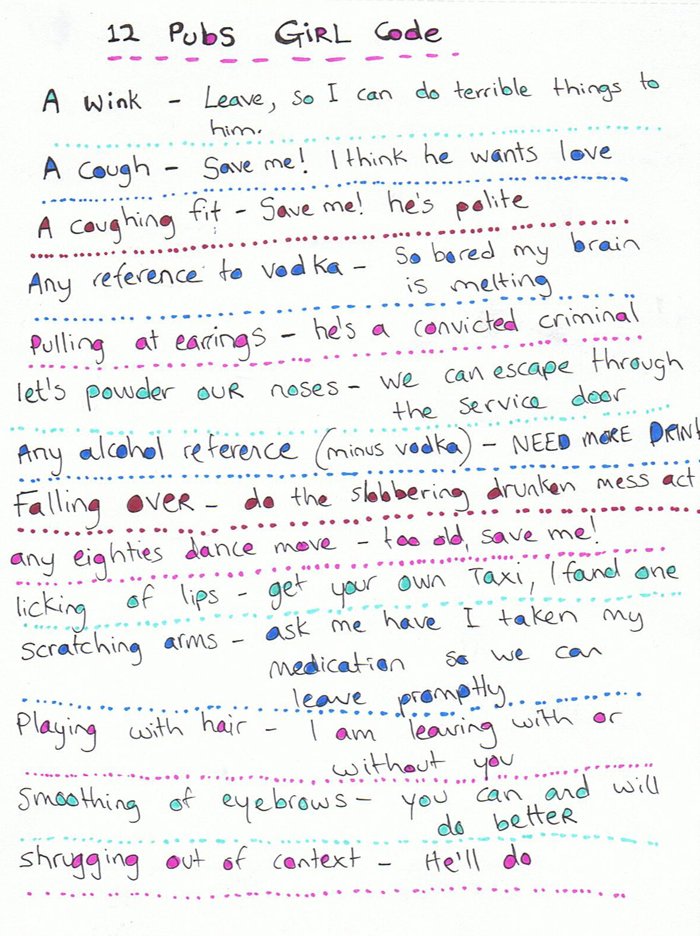 It appears that every woman over thirty decided to come in here. It’s something to do with the delicious looking bartenders, everyone is standing around staring at the bar and giggling and tossing their hair. They’d do a lot better if they took off their moronic jumpers.

Laura and I were the youngest by about ten years, so we swaggered in there, downed some vodka, glanced disparagingly around and sashayed out. You have to know how to make an exit.

We’ve been here for an hour already and haven’t managed to find anyone to buy us a drink. Laura is getting so twitchy that she wants to infiltrate a rowdy work-party in the corner. I am trying to hold her back. They are all balding accountants.

I had to drag Laura off the lap of a balding accountant. She was on his knee and visibly preening. She gives up so easily. Half of Dublin isn’t drunk enough to say hello yet. She needs to wait another hour or so and we’ll have much better luck. It’s about staring intently at men for the first four pubs, knowing that fate will bring them back to you later in the night.

I’ve so far licked my lips while staring at a young blond hipster. He had an excellent handkerchief and eyes that would undress anyone. He seemed alarmed, but give him a few more drinks and he’ll find me.

I also accidentally dropped my drink on the only handsome accountant in the world. He was an accountant, so he didn’t take it the right way and I doubt that prospect will play out well.

Barry is here. He had some blond tart in his arms. She was literally in his arms, he was giving her birthday bumps. What a convenient time of the year to be born. She probably goes around with that as an icebreaker. I should feel sorry for her really, not all girls are blessed with my come-to-bed eyes.

I coughed loads, but Laura ignored me. She said the signal doesn’t work if I’m not talking to anyone and she sauntered off to chat-up some eighteen year olds.

I’m feeling incredibly dizzy, I might go write some poetry on the bathroom walls. The burden of my poetic calling is that even in the height of Christmas fervour, I am drawn to culture the masses.

As I walked in the door the tallest man in the world grabbed my arse. Finally. He then bought me a pint of cider and said it looked like my kind of drink. I was disgusted – that’s like calling me a song writer. Cider is a crude and unrefined symbol. I told him as much and he said “ah here, I’m not wasting that on you”, he took the drink back and gave it to a girl painted orange behind me. She giggled. He was right, she was better suited to cider.

Laura was busy with two very handsome men. I joined her and she was tugging at her earrings. These men were incredibly handsome, so I ignored her signal. We weren’t looking for husbands and I was sure a convicted criminal had plenty to bring to the table.

It soon became clear that they were sinister criminals. They made several references to heroin and though I would relish the opportunity to try it, it would have been pointless without a pen and paper in my handbag. What if THE POEM came to me, and it was wasted on these drug dealers.

One of them was stroking Laura’s knee… things were drastic. Laura loves getting her knee stroked, she’s like putty in a knee-stroker’s hands. I would suit being a heroin addict, but it would ruin Laura’s life. So I stumbled and threw myself to the ground and slurred out a bunch of stuff about loving Laura and being a mess and sorry, sorry, sorry. The men didn’t know it was a signal, so they were confused by the fact that Laura was ignoring my demise. She told me to stop acting the maggot. I persisted with my drunken mess act, until the bouncer kicked me out. I had to hit a poor woman in the face. Laura had no choice but to follow. She would only get messed up, in a life of drugs, if she thought we were in it together.

Behind The Dark | Review