Review | Revolve8 Sucks You In, But Watch Your Pocket!

A battlecry rings out as the words “Full Genie Jacket” slash across the screen. The battlefield freezes as the camera zooms in on Aladdin, here imagined as a gunslinger wielding his magic lamp as a weapon, charging up a powerful shot. The force of the blast takes him off his feet as he blows away Hoichi, a necromantic guitarist who conjures salvos of airborne skulls, to the soundtrack of punk rock guitars.

In retaliation, Cinderella (here a biker riding a frozen pumpkin motorbike) activates “Redline” from across the map; a brief and dramatic cutscene heralds her charge to the enemy base, sparks flying as she grinds her top wheel into their defences. 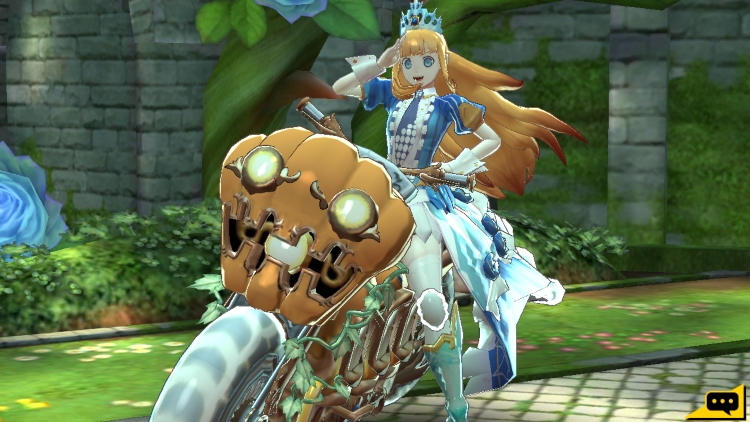 This is Revolve8, a ‘Clash Royale’ style free-to-play Real Time Strategy game for mobile released by Sega in January.

Developers include all stars such as Koji Igarashi of Castlevania fame, who handled character designs, and former Yakuza producer Masayoshi Kikuchi.

Those names alone made me curious; mobile gaming is generally far from my radar, but some time out of the country and away from my beloved console made me curious enough to give it a bash.

Before long, I was glued to the game’s delivery of rapid fire dopamine bombs.

Famous fairytale characters battle it out in the land of “Imago”, where once every 100 years a tournament is held. The winner gets to re-write their own story, increasing their real world popularity and expanding the reach of their kingdom within Imago.

The presentation immediately sucks you in; the slick menu and UI design, the beautifully detailed 2D drawings and 3D models illustrating its diverse character roster and the lovely animations that bring them to life.

Unfortunately, mild pay to win elements undermine what is at its core an intricate, tactical and fun PvP game with some single player content to boot.

Gameplay riffs on a familiar ‘Clash Royale’ formula; battles take place on a single screen over three minutes. Each player has two sub towers and a core tower; destroy more sub towers in three minutes, you win. Destroy your opponent’s core tower, you automatically win. Deadlocks are decided in Overtime. 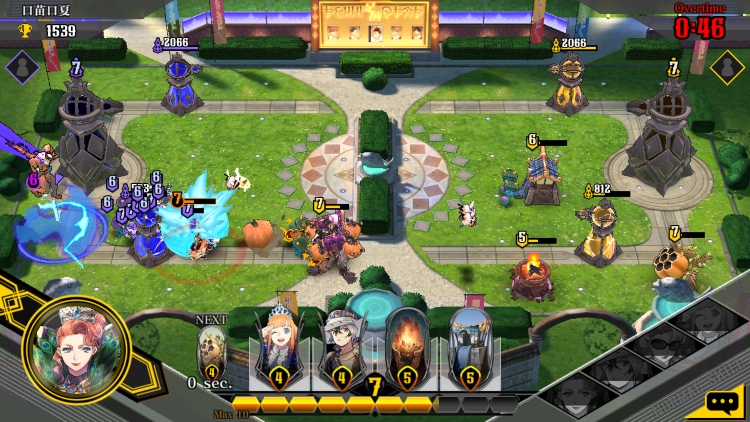 Decks are constructed from eight cards, four of which can be hero cards, and players hold four cards in hand. Units cost ‘ink’, which rapidly regenerates over the course of the match, and move and attack automatically.

Hero abilities throw a wrench into this familiar formula. Tank characters can shield themselves or heal up, offensive characters can get a speed or attack boost and support characters can activate focused, powerful attacks. Only one hero’s ability can be used every thirty seconds, a shared cool-down timer lending weight to your choices in the heat of battle.

In deck-building, any hero can be designated as the Leader of the deck, who has access to a character specific super ability that can be used once per match. These are potentially game swinging affects that allow you to craft and execute grand strategies during matches.

A defensive deck can play reactively, planning to unleash a last-minute charge from Cinderella or a magic infused forward dash from the mythological samurai Momotaro to break through a sub-tower with seconds to go.

Alternatively, a grindier deck can utilise the Wicked Queen, a tank who, uniquely, can be deployed anywhere on the map. After a push into enemy territory, you can launch the Queen into the thick of it and activate her super. This teleports her and nearby allies through her magic mirror to the opposite sub-tower for an often game-winning surprise attack.

These abilities are wrapped up in detailed animations that help express character traits during moment-to-moment gameplay.

Combined with unique and energetic voice acting for each hero (which also serve as audio cues], Revolve8 manages to marry the ridiculous lore of its world, gameplay and characters together surprisingly effectively. You can tell the developers are having a ball exploiting the large possibility space afforded by the vague ‘Neverland on steroids’ theme. It’s infectious.

Story mode is similarly bonkers, a substantial chunk of content that doles out small amounts of jewels, premium currency, as you progress. The tone is generally comedic and goofy, sometimes gratingly so, with short visual novel sections [that you can read, listen to or skip completely] mixed in with PvE gameplay scenarios. New chapters are unlocked as you climb the game’s ranked leagues. Additionally, standalone stories for each of its heroes serve as brief introductions to their playstyles. 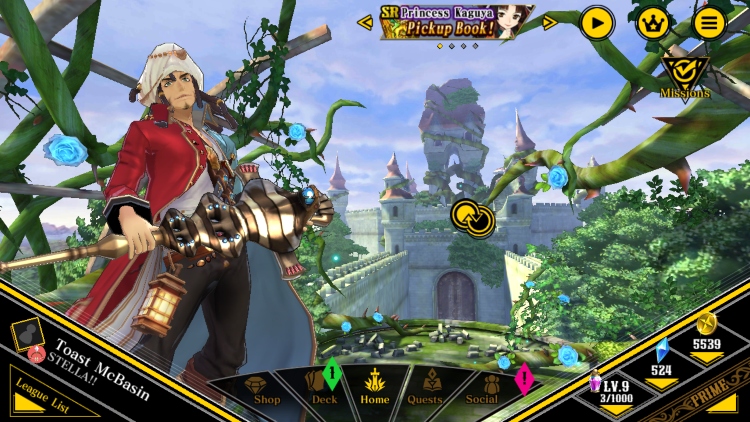 The game has options for graphical quality and framerates, but I found the game to run impressively smoothly on my Xperia L1, which is reasonably long in the tooth at this stage, at full framerate settings and low graphical settings.

I spent most of my time in ranked mode, delving into the various aspects of the game’s mechanics that make it a rich and satisfying competitive experience, bar some mild and infrequent connectivity issues.

Whenever you make a shove into enemy territory, you navigate the knife edge between committing enough troops to break through their defences in one lane and having enough resources to deal with a potential counter-attack in the opposite lane, all the while having to be conscious about where you place your units. As close to enemy territory as possible to maximise pressure, staggered to try to avoid over-extending into an area-of-affect spell, or as far back as your own towers to play it safe?

The next card you will draw is always shown, similar to the ‘next block’ icon in Tetris, giving you vital information to plan ahead.

The auto movement and targeting mechanics can also be exploited. Timed right, a ranged character like Aladdin can hide behind the Emperor from ‘The Emperor’s New Clothes’ [here a hyper-athletic bodybuilder wearing a jewel-encrusted speedo], picking off heroes auto-focused on the tank.

Unfortunately, Revolve8’s accessible, rapid and strategic gameplay is undermined by the presence of microtransactions, ranging from €5 to €90, most of which directly impact gameplay.

Suggested Reading | Disease Or Inevitability? A Guide To Microtransactions

Cards can be upgraded from levels 1-13 using gold, a separate, more accessible resource to jewels. Stats increase by 10% every level and cards require increasingly large amounts of duplicates every time they are levelled up. On top of this, every time you level up a card you generate resources towards levelling up your towers from base level (1) to max level (13); the higher level the card, the more ‘tower experience’ generated. Levelling your towers up increases their health and damage output, which can occasionally be the difference between winning and losing, and the grind increases dramatically as you level up.

On top of that, you occasionally just get some gold when you level up, without any increase to your tower power, and you never know ahead of time.

“Books” (card packs) can be purchased with jewels, and you can grind about 150 jewels per day from daily challenges. Card packs can be bought for 300, 1000 or 3000 jewels, valued by the number of cards you receive and their rarities. That works out to about €1.50, €5 and €14 respectively if you buy jewels straight from the in-game shop.

Additionally, a new “special offer” is thrown at you every time you enter a new league (for example, the league 6 booster costs €9, which goes up to €13 for league 7 and €13 again for league 8).

Presented alongside special coin and card pack bundles and a premium subscription for €5 per week, monetisation in Revolve8 feels excessive and somewhat predatory. 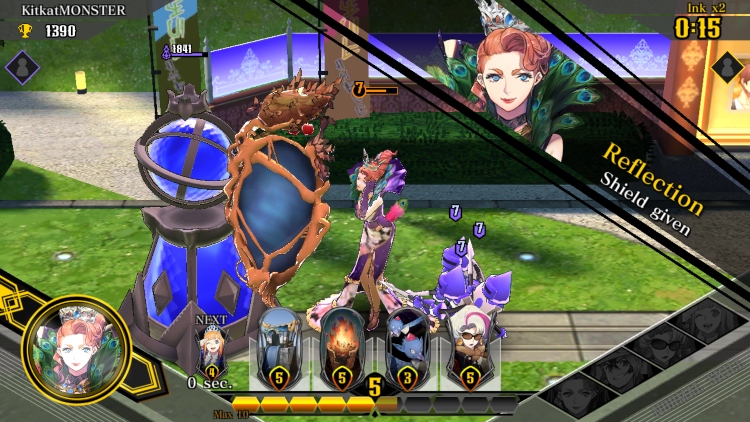 To be transparent, I started playing during an 800K download event, roughly doubling the number of gems I received for dailies and handing me a free ‘golden’ book.

That being said, I never felt overly disadvantaged for not spending money on microtransactions, thanks in part to the free card pack given every 24 hours.

In my experience, opponents tended to be within one level of my own thanks to the game’s solid matchmaking, but you’ll often find yourself playing against opponents with higher level cards and towers than you and vice versa.

It’s frustrating, not least because the matches really do have a lovely dynamism. With 60 seconds to go, the ink regeneration speed is doubled as the soundtrack shifts to an aggressive and energetic electric guitar motif. This naturally creates a hectic crescendo to matches, very much borrowed from ‘Clash Royale’ but no less effective here.

Even learning matchups have been streamlined here more effectively than in many other PvP titles. Most heroes are automatically unlocked as you progress through the leagues.

This introduces new hero mechanics gradually in manageable chunks. Wonderfully, it also creates a diverse meta that dynamically shifts as you progress through the leagues and gather more deckbuilding options.

Any custom deck you make will be tagged as an archetype automatically, and standardised archetypes are unlocked as you level up (for example, a “siege” deck that focuses on ranged damage dealers). This is a small touch that goes a huge way to making deckbuilding accessible and fun.

In a nice quality of life touch, a small selection of cards can be bought from the shop with gold, letting you target specific cards to level up every day and giving you a tiny bit more control over expanding your collection.

Also, joining a guild allows you to request cards from other members and, smartly, encourages you to donate unwanted cards by giving you small gold and tower experience boosters for your charity.

I came away from Revolve8 extremely pleasantly surprised; it scratches the itch for a quick but quality PvP experience on mobile with style.

However, the pay to win elements are blatantly designed to squeeze potentially large sums of money from you: enjoy the game, but beware the predator.

Niall is a journalism graduate that loves video games, with a soft spot for anything particularly dark or soulful.

Light It Up! Modern Lighting in The Witcher 3, Control and More

2020 Game Releases That Would be Amazing in VR