The Woman in Black 2: Angel of Death – A Review 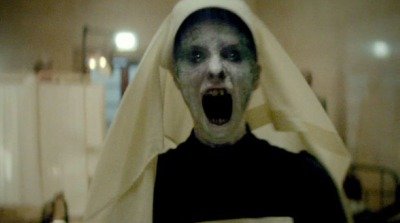 “40 years after the first haunting at Eel Marsh House, a group of children evacuated from WWII London arrive, awakening the house’s darkest inhabitant.”
Hammer was always a distinct brand of horror. It wasn’t ever really ground breaking. Often it was the opposite. Hammer tended to embrace gothic theatrics, cliché and silliness in general. This meant that, before rising from the grave somewhat recently, the studio was remembered fondly, bringing more wry smiles than night terrors. The Woman in Black 2: Angel of Death, in this way, feels very “Hammer”. This is the kind of horror movie where the scares would mostly be eliminated by a good set of floorboards and some WD40. Almost all the scares follow the creak, creak, bang pattern.

This sequel to the Daniel Radcliffe vehicle from a few years back follows a group of characters back to the same Victorian ghost house. Set during the London blitz, our main character is the most inquisitive nurse in the world. Any minor noise prompts her to wander off, calling ‘Hello?’ tremulously. Naturally she’s sent off to a rotting, derelict mansion with a group of kids who are being relocated to the country.

Avoiding Luftwaffe raids would be bad enough but, with mechanical predictability, an evil Victorian ghost story begins to unfold. Everything happens pretty well as one would expect it to. Creepy kids see things in the night, fog creeps in over the locations and supporting characters refuse to listen to our heroine.

This is not a particularly scary film. Hammer films rarely were though. The fact that this isn’t very frightening does make it passable light entertainment.