Hannibal star Mads Mikkelsen faces off against Jeffrey Dean Morgan in a Western that might well have been pitched as Seraphim Falls meets Valhalla Rising.

Jon (Mikkelsen) and his brother Peter (Mikael Persbrandt) were soldiers in the 1864 Dano-Prussian War, and, following Denmark’s catastrophic defeat, they fled to a life of farming in the Wild West. After seven years Jon’s wife Marie (Nanna Oland Fabricius) and son Kresten (Toke Lars Bjarke) finally arrive to reunite the family. But they have the misfortune to share a stagecoach with thugs Paul (Michael Raymond-James) and Lester (Sean Cameron Michael). 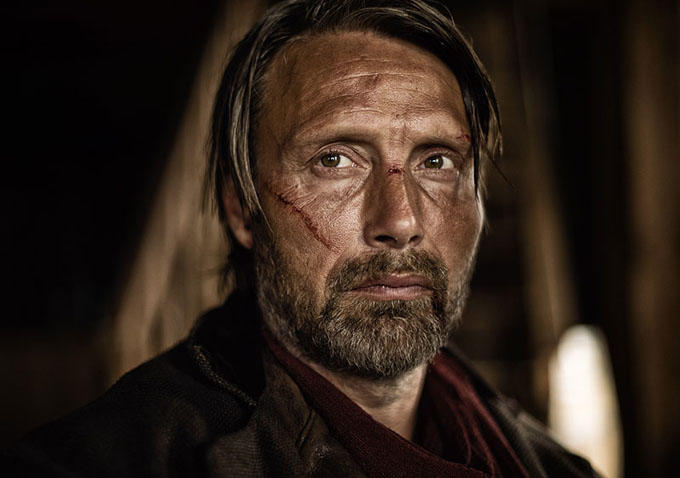 Jon and Peter decide to head further West after this incident, but have not reckoned on the cowardice of their local sheriff/pastor Mallick (Douglas Henshall) and mayor Keane (Jonathan Pryce). They are eager to hand the brothers over to placate the enraged Col. Delarue (Jeffrey Dean Morgan), leader of a gang that includes the Corsican (Eric Cantona) and the mute Madelaine (Eva Green). But Delarue finds himself at war…

Thomas Hobbes said that before central government exists there is “continual fear, and danger of violent death; and the life of man, solitary, poor, nasty, brutish, and short.” The Salvation has a very Hobbesian view of the Wild West. The shocking first two sequences almost seem to stand alone, and to not need a movie to follow them, they are so startling.

The keening strings and classical guitar of Kasper Winding’s score feel like they ought to be replaced by the primitive polyrhythms of Stravinsky’s The Rite of Spring, because we are witnessing the violent rituals of a world before civilisation. There is as much magical thinking in the hope of teenage store-keeper Voicheck (Alexander Arnold) that a white knight will arrive and murder Delarue and all his gang, as there is in the delusion of Mallick and Keane that if they offer up sacrifices it will placate the dragon.

Director Kristian Levring, who co-wrote the screenplay with Anders Thomas Jensen, appears to be in thrall to Nicolas Winding Refn. But despite its almost mythic, elongated, sadistic sequences of bloodshed; including a particularly well-staged final assault; this isn’t uncanny enough to match the moody enigma of Refn’s last outing with Mikkelsen, Valhalla Rising. And its nihilism precludes the sort of hopeful existential questioning that characterised Seraphim Falls. Instead it seems Levring and Jensen are deconstructing the rampage movie (Taken, John Wick) by removing all gleefulness and exposition from a set-up that has the obvious elements of High Noon, The Magnificent Seven, and Once Upon a Time in the West.

But there’s also the impression they’re encoding a pessimistic view of society. Mallick’s sickening hypocrisy in saying he must sacrifice one sheep to save the flock recalls the “with a hundred victims save a thousand” logic that Hannah Arendt castigated in Hungarian Jewish leader Dr Kastner, who “saved exactly 1,684 people with approximately 476,000 victims” as his main concern in WWII was saving himself and his circle. Desperate situations reduce everyone to grasping Hobbesians. A Scandinavia echoing with Ibsen, Grieg, and Kierkegaard, can be easily replaced by a struggle for survival against a Delarue. The final CGI enhanced time-lapse shot, akin to Gangs of New York’s close, pessimistically underscores the sophistry of Delarue’s employer: “we have to look civilised.” Not we must be civilised… 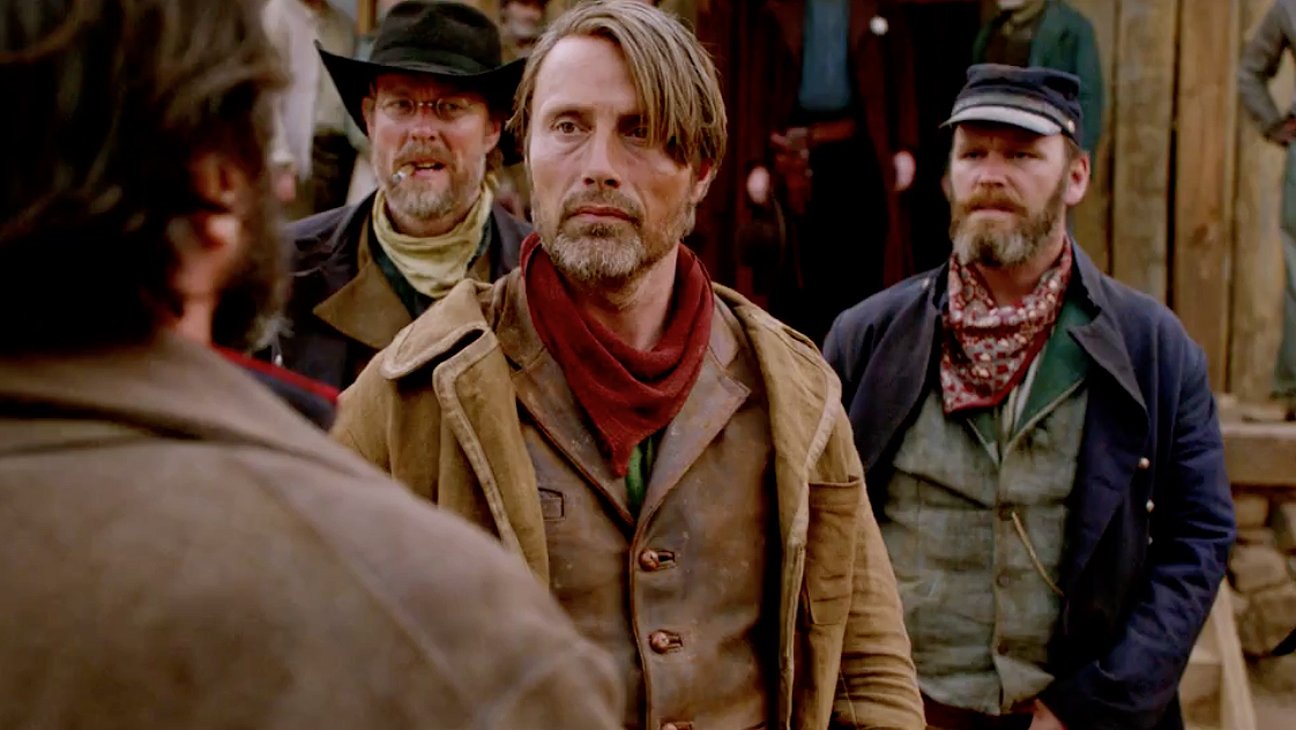 Apart from the budget-mandated awful CGI flames in the finale, and a rain-sodden night scene that belongs in Sin City, every frame of this movie looks absolutely gorgeous; even when depicting horrible violence. Cinematographer Jens Schlosser embraces the earth tones of this arid land, against which Diana Cilliers’ colourful costumes strike an almost expressionist note; especially Eva Green’s green dress, and Morgan’s wine overcoat. Mikkelsen and Persbrandt ably lead a talented cast, but this film prioritises physical acting over subtle emoting or memorable dialogue.

The Salvation is a savage film you can’t easily imagine anyone recommending to a friend, but it is rather well made, and quite thought-provoking.

The Salvation is out on Friday 17th April and you can check out the trailer below: